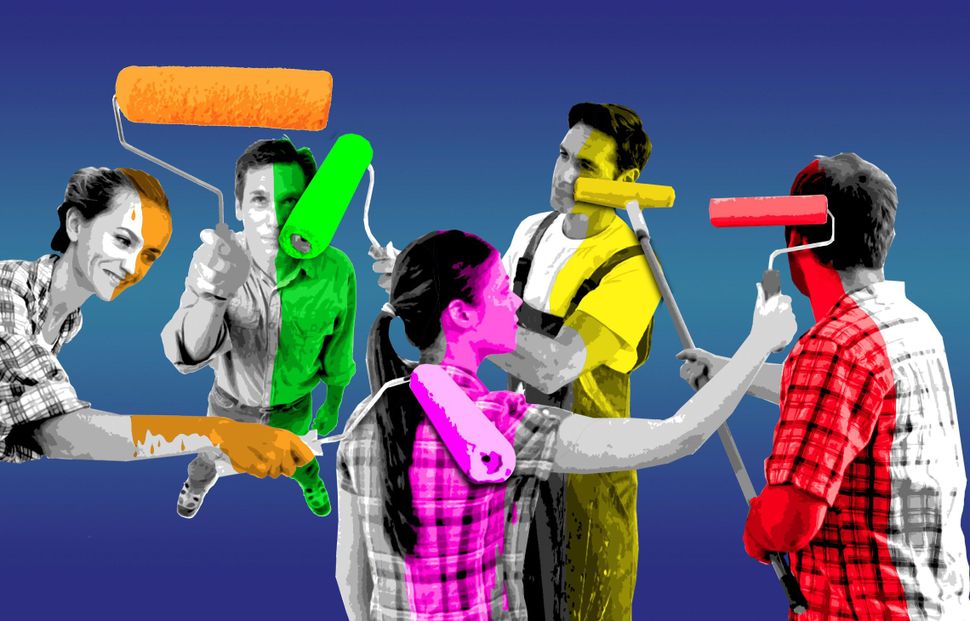 “I have lived for 26 years under the illusion that I am unconditionally white…. Recently I have started looking at my face and going, ‘Oh man, do I look too Jewish?’” Sydney Brownstone, the reporter who voiced this question in a recent Blabbermouth podcast, is not alone in wondering this. Many Ashkenazi Jews who have always assumed that they’re white are noticing that they’re not white enough for Donald Trump’s white supremacists. Suddenly, they’re asking themselves: Wait, how white am I, exactly?

To tackle this question, try a little visualization. Picture all American Jews arranged along a spectrum. On one end are the Ashkenazi Jews who identify as white and get coded as white by society. On the other end are the Jews of color who can never pass as white: black Jews, Chinese Jews and others who get read as non-white on the street. In the middle of the spectrum are Sephardic and Mizrahi Jews, who sometimes pass as white and sometimes don’t.

As a Mizrahi Jew — my ancestors come from India, Iraq and Morocco — I inhabit that ambiguous middle space. For a long time, it’s been a lonely place to be, since Ashkenazi is Judaism’s default setting in America. It’s also been massively confusing, since I often reap the privileges of being white-passing, even as I get selected for “random additional screenings” by the TSA or for “Where are you really from?” queries from strangers on the street.

But here’s how I think about what’s happening now: Ashkenazi Jews are increasingly getting pushed into the middle space with me. The ascendant discourse of white supremacy, which posits that Jews are not “pure” whites, has thrust them into this space — a space where the lines of your identity are perpetually blurry, where a sense of racial belonging constantly eludes you, and where the category of whiteness is always already in crisis, because your inability to situate yourself cleanly inside it (or cleanly outside it) shows how logically incoherent the category must be.

It’s not a comfortable state to be in — Mizrahi Jews like me get that, because we’ve been in it our whole lives — so it’s not surprising that a lot of Ashkenazi Jews are resisting it. Some are doubling down and insisting that they’re 100% white. Others are taking the opposite tack, insisting that they’re 100% non-white, and that it’s wrong to say they benefit from white privilege. Take Micha Danzig, who wrote in the pages of the Forward, “Ashkenazi Jews have been the victims of European and Western oppression and violence for centuries precisely because they were perceived as not being a part of the ‘white’ world…. Jews are not ‘white.’ We are a tribal people from the Levant.”

There is some validity to that. If your grandparents suffered through the horrors of the Holocaust, then it seems clear that historically your family has not enjoyed white privilege. Still, since World War II, your family likely has been enjoying some amount of white privilege in America, where anti-Semitism hasn’t been a core facet of the nation’s racial logic the same way that anti-blackness has. And you have to recognize the social structures that continue to confront people around you on a daily basis, even if your own family history is tragic.

Besides, why not relish the discomfort of inhabiting this ambiguous middle space? Discomfort can be productive. Let it reveal to you what it’s revealed to Sephardic and Mizrahi Jews for decades: that your dream of fitting snugly into a certain racial category was doomed from the start, because the category of “whiteness” itself is bogus, a social construct with ever-shifting borders — just look at how it fails to consistently contain or exclude you.

Now, notice how recognizing the fragility of your white identity encourages you to ask some tricky questions. Questions like, “If I’m never going to be white enough for the ‘alt-right’ — if, from their perspective, I’ve been inhabiting the middle part of the spectrum all along — then should I really be allying myself with the likes of Steve Bannon? Shouldn’t I instead ally myself with Jews of color — and with people of color in general, and with Muslims and immigrants and all the other primary targets under Trump?”

I’d argue that now is the time to embrace your Jewish distinctiveness, and to embrace the work it pushes you to do with and for others. Some Mizrahi Jews realized long ago that our non-white status should make us natural allies for other non-white groups. My best-case scenario for today’s white supremacist surge is that it will bring more and more Ashkenazi Jews to this same realization, pushing them to reach out to the non-white-passing end of the spectrum. I hope the people on that end reach back.