Trump’s Bigotry Isn’t Accidental. We Must Unite To Fight It. 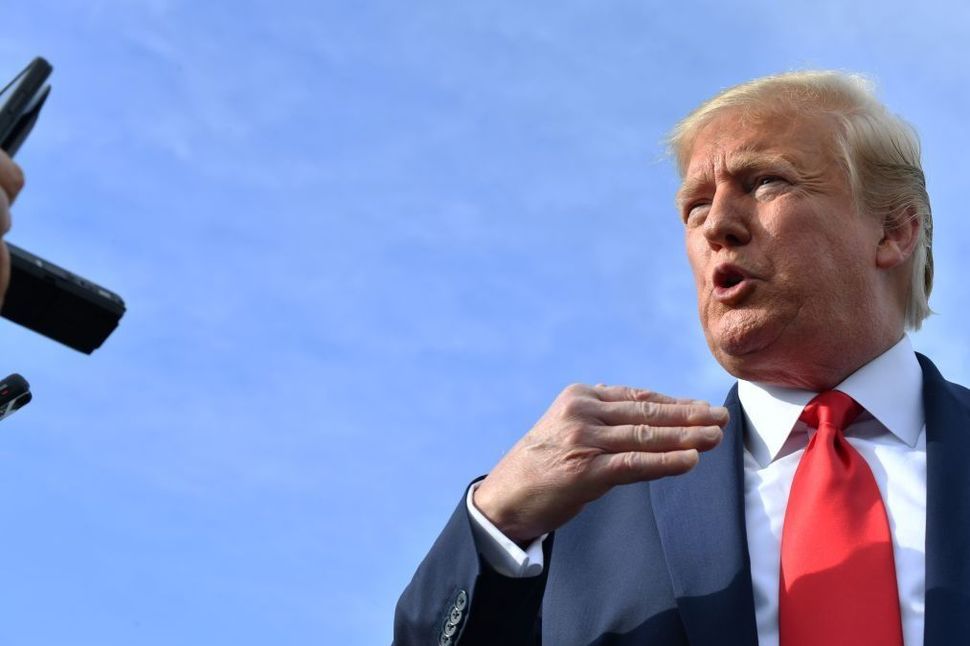 US President Donald Trump speaks to the press before boarding Air Force One at Morristown Municipal Airport in Morristown, New Jersey, on August 15, 2019 as he departs for New Hampshire to hold a campaign rally. (Photo by Nicholas Kamm / AFP) (Photo credit should read NICHOLAS KAMM/AFP/Getty Images) Image by Getty Images

In a strike of incredible irony, Donald Trump engaged in horrific anti-Jewish bigotry while in the course of leveling false charges of anti-Semitism against two of his political opponents: Congresswomen Rashida Tlaib and Ilhan Omar. While attempting to make the false and baseless case for why these Congresswomen supposedly hate Jews, Trump stated that “any Jewish people that vote for a Democrat — I think it shows either a total lack of knowledge or great disloyalty.”

Disloyalty to whom, you wonder? Be it Israel or the U.S., this is still an utterly despicable attack on the American Jewish community who deserve our solidarity in response.

For this President in particular, bigotry is rarely a gaffe. He is a professional trafficker in bigotry as a means of political ascension, and it has served him well in an ugly political climate stoked by divisive opportunism. Even before Trump became President, he accused the Republican Jewish Coalition of wanting to “control” politicians with their money; told us he would stop Mexicans from crossing into the U.S. because “they’re rapists;” said he would order “a total and complete shutdown of Muslims entering the United States;” and promoted birther conspiracies against his predecessor, Barack Obama, the first black president of the United States.

This wasn’t simply campaign rhetoric. Trump brought this bigotry into his presidency. From the unspeakable cruelty towards migrants, including children, on the southern border, to the “very fine people” he declared among the neo-Nazi march in Charlottesville, divisive fearmongering is how Trump has chosen to rule the country.

And yet, this “disloyalty” charge he directed at American Jews, the overwhelming majority of whom vote Democrat in every election, was indeed a gaffe, because it alienated the very community he was hoping to win over.

Unlike his rhetoric about Muslims or black and brown women in Congress, his anti-Jewish comments here were not an attempt to rile his base against a minority group, but an attempt at pressuring and scaring a minority group into supporting his political agenda. This backfired only because the President is a reckless dolt who doesn’t understand his audience.

This wasn’t the first time Trump has done this with the American Jewish community. Last year, at a White House Hanukkah party, Trump suggested to American Jews that Israel (rather than the U.S.) was their country, by way of expressing love for it. That’s because when Trump interacts with people who aren’t like him, he doesn’t see people; he sees racial, ethnic, and religious categories that are devoid of the complexity of full personhood.

It’s also why he had the audacity (read: stupidity) to suggest that a random black reporter should set up a meeting with black lawmakers for him (no connection beyond skin color), and why he wondered why the “pretty Korean lady” on his intelligence staff wasn’t working on North Korea.

You can almost hear the simpleton in his head going: “This is what I should say to the blacks when I see them, and the Jews are loyal to Israel, so this is how I make them hate the Democrats.” Meanwhile, the country’s social fabric is getting ripped apart before our eyes by this dimwit and his divisive garbage pitting different American communities against each other.

In a normal political climate, Trump would never recover from the horror of his words. But lucky for him, Israeli Prime Minister Benjamin Netanyahu, who claims to speak for all Jews (but who certainly does not), is constantly providing cover for his greatest ally, because Trump has offered a total carte blanche for Israel’s illegal expansionist policies. Indeed, Netanyahu’s government appears to have no problem with actual anti-Semites, so long as they do not threaten Israel’s occupation.

Even though we are in a climate of real and rising anti-Semitism, with two deadly synagogue shootings by far-right extremists taking place in the U.S. in the past year, the Israeli propaganda machine is ignoring the real threat against American Jews, and is almost exclusively focused on supporters of Palestinian human rights as targets for baseless smears of anti-Semitism. This happens to include myself, as I was accused of anti-Semitism this week, for simply mentioning Israel’s occupation of the Palestinian territories and U.S. military aid to Israel.

In the face of the alarming rise in anti-Semitism, Islamophobia, white supremacy, and virtually every other form of bigotry targeting every minority community, it is not poetic pandering to say that we’re all in this together, and that the future of our country depends on how we respond to this moment.

We really have a choice to make, and we need to make it before it’s too late: We can either continue to be baited into mindless fights with each other at the expense of our unity and physical safety in this country, or we can rise together against the ugly and divisive rhetoric that threatens us all.

Omar Baddar is the Deputy Director of the Arab American Institute.

Trump’s Bigotry Isn’t Accidental. We Must Unite To Fight It.