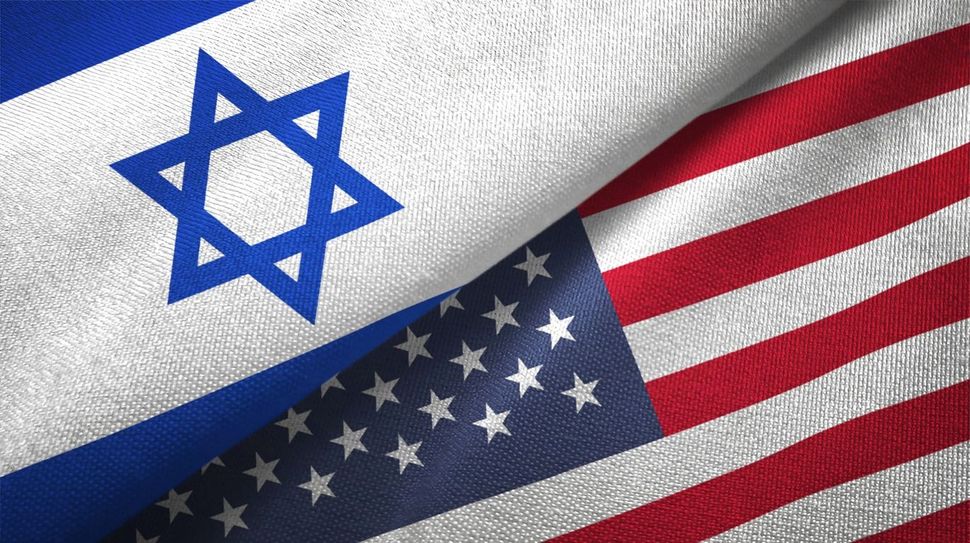 United States and Israeli flag together Image by iStock

When I was a child growing up in the UK, we’d often debate a seemingly innocuous question: if England played Israel at football, who would you support?

On the one hand, our beloved England, the Three Lions, the nearly men of international football who held the dreams of a nation in their slippery hands. On the other, Israel, plucky little Israel, an underdog, a footballing neophyte, our Israel.

This debate finally became a reality in 2007 when England actually played Israel in two European Championship qualifying games. It was a thrilling time to be alive in north London’s bagel belt.

This question of sporting loyalty, as those who have watched American politics last week will have noticed, is actually not very innocuous at all. It uses sport as a vehicle to drive at something very deep: When push comes to shove, who do you really support? Or to put it another way, what country would you die for?

In Britain this is known as the “Tebbit test”, after Conservative politician Norman Tebbit, who argued that South Asian immigrants who still supported say Pakistan against England at cricket were not assimilated, and therefore a problem.

This then, is the dual loyalty trope, most recently summoned by President Trump, who suggested that American Jews who vote for the Democrats show “either a total lack of knowledge or great disloyalty”.

The President’s comments unleashed a torrent of justifiable rage, and a flurry of racism allegations. The president’s thinking is this: Jews are loyal to Israel. I’m nice to Israel. Therefore Jews should vote for me. It’s unbelievably clumsy and likely anti-Semitic, at least in implication, and American Jews are right to be annoyed. They were also right to be angry over Congresswoman Ilhan Omar’s comments in March about politicians being loyal to Israel over America.

These comments are troubling partly because they come quite obviously from a place of bad faith and turn Jews into political ping pong balls. But amid all the partisan gunfire, one question is never asked: Is there actually anything wrong with dual loyalty?

The assumption underpinning this agonizing debate it is that dual loyalty is a bad thing which entails less loyalty, a weaker national community, even a potential fifth column.

To me this seems like a reductive and small-minded understanding of loyalty, which is not a zero-sum game. Unless you insist on a blood and soil volksgemeinschaft concept of a nation, so literally the opposite of America, then some level of dual loyalty isn’t just inevitable, it’s actually desirable. It gives us breadth and empathy and widens our world view.

Viewing dual loyalty as a weakness also misunderstands human nature, seeking to funnel it into a single one-size-fits-all national identity. We humans are large, to borrow the famous old Walt Whitman quote, and we contain multitudes. We contradict ourselves, that is what makes us human. We can love more than one thing at once.

So of course Jews have dual loyalty. Of course we do. We know our history. Given what happened three years before the state of Israel was born, given the gassings, the pogroms, the Spanish Inquisition, the forced Jewish exodus from Arab countries in 1948, given the countless times that nativists have turned violently on Jews, given what happened to the St Louis, for most Jews (though by no means all), it feels foolish not to support the existence of a Jewish state, even if you don’t love all that it does.

But it’s not just Jews. Many, many people in this country have dual loyalties, multiple loyalties in fact. Irish-Americans. Italian-Americans. Indian-Americans. That’s what the prefix is for. I certainly do. I am loyal to Britain, my country, to England, my nation, and I am loyal to Israel, my tribe’s long-desired homeland and safety net.

I’m even becoming loyal to America too. I’ve lived here for three years now, and recently felt the first prick of tears before a baseball game as the Star Spangled Banner chimed. An anthem, it is worth noting, written about a war against Britain, my country. A country, it is worth noting, whose very existence is built around the concept of dual loyalty – a united kingdom. Loyalties can be pretty dynamic like that.

What do my many allegiances make me then? A rootless cosmopolitan? Do I belong nowhere? Or do I love more than one country and potentially belong in any of them? London. England. Britain. Israel. America. They can all make me cry, shiver and feel wanted. If that renders me disloyal, well, I’m a funny kind of traitor.

The problem is that people mistake dual loyalty for disloyalty, yet the two are very different. In truth, we all have multiple allegiances, to family, friends, gender, sexuality, race, sports teams, hometowns, states, nations and so on. We mesh these loyalties together into some kind of meaningful identity, and that’s who we are. It’s a knotty business and harder for some than others, but people work it out.

I balance my Zionism alongside my misery at the Israeli occupation and identity as a Diaspora Jew. It is painful at times, but I do ok.

This is also a natural way to be. For most of recorded history, humans have owed their primary allegiance to family, village and tribe, and only then to some distant empire or monarchy. It is only in the post-Enlightenment era of the nation state that the idea of a dominant national mono-loyalty has emerged, and often been abused.

This is not to say that there’s no such thing as a national community, with mutual norms and symbols and ideals, nor that such a thing should not be aspired towards and protected. This is not about open borders or so-called globalism. Nations work, and they work better with some level of cohesion.

But the national community does not simply disintegrate because of dual loyalties, whether they are to the Jewish state, the Palestinian homeland or the Pakistani cricket team. A nation need not be so rigidly and crudely defined. Of all countries, America should know this.

Of all countries, America should know that dual loyalty works. Show me someone with dual loyalties, and I will show you a patriot. A complex patriot yes, a nuanced patriot, but a patriot nonetheless. This whole steaming dumpster fire of a debate, Trump and Omar and AIPAC and so on, would make a hell of a lot more sense if we could just acknowledge this point.

Who then, you must be wondering, did I plump for in the great England vs Israel footballing showdown of 2007? I supported both teams of course. Which meant I won either way.