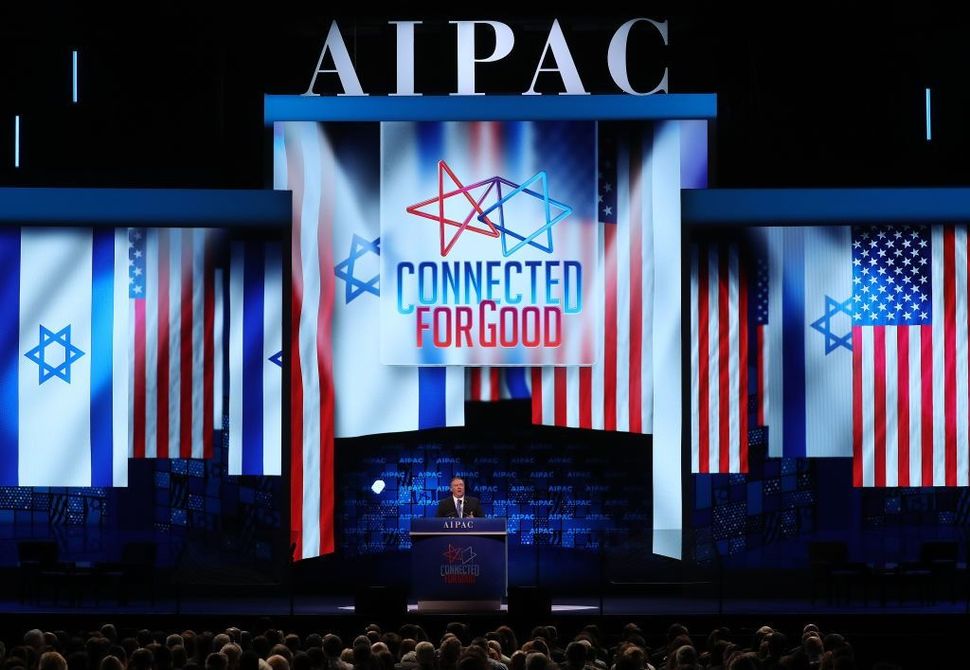 Even if they have never attended it, just about everyone in the American Jewish community is aware of The American Israel Public Affairs Committee’s annual Policy Conference, which attracts nearly 20,000 people and is billed as the largest pro-Israel. This one day Washington-based event features presentations by an array of journalists, academics, and commentators on a variety of issues related to Israel, America, and the Middle East.

The timing of the event, barely a month before Rosh Hashanah, is intentional. As AIPAC itself puts it in its invitation to rabbis: “The National Rabbinic Symposium will provide you with insight and information as you finalize your High Holiday sermons.” The expectation is clear: Rabbis will feel equipped to address their congregants on the holidays with facts they have learned, and, it is hoped, with interpretations that were on offer during the symposium.

And yet, this High Holiday season, AIPAC deserves more criticism than praise. For in a series of recent missteps, the organization has abandoned its mission — and American Jews.

Let this be stipulated at the outset: AIPAC’s existence brings a great deal of value to the Jewish community, and while I, and many others, disagree with their positions with various degrees of frequency, it is indisputable that we would lose a great deal were there no AIPAC.

As is the case with just about all American rabbis, throughout my career, the organization has kept in close contact with me, with the stated goal of mobilizing Jewish leadership to lend support to its mission. This was especially so throughout the 24 years during which I was the Senior Rabbi of a major Conservative congregation. AIPAC’s courting of rabbis (they are unfailingly respectful of us and solicitous of our needs) is natural and makes good sense.

But AIPAC’s fervent defense of Israeli policies have sometimes had the unfortunate effect of exposing many American Jews — and even their rabbis — to unwarranted and often vicious opprobrium from the zealots among us who look for such targets.

One of these episodes occurred just after the 2016 election, when the outgoing Obama administration declined to veto UN Security Council Resolution 2334, which condemned the settlement enterprise in the West Bank. It was certainly reasonable to anticipate debate about the wisdom and justice of the American government’s decision. But in an uncommon lapse from AIPAC’s factually reliable statements, it claimed at the time that the resolution “supports BDS and ignores Palestinian incitement and terrorism.” This was patently untrue on two counts.

First, two of the resolution’s articles explicitly called out acts of terror and violence against civilians, as well as incitement and inflammatory rhetoric. Even worse, AIPAC completely ignored the fact that the resolution, rather importantly, called on all states to “distinguish, in their relevant dealings, between the territory of the State of Israel and the territories occupied since 1967.” This distinction is crucial; indeed, the reason BDS is so thoroughly reviled across the political spectrum in the Jewish community is precisely because BDS insists that no distinction between the two sides of the Green Line exists or should exist.

We are not BDS supporters — but AIPAC tarred us as such. Young rabbis, especially those who are conscientious Zionists, should not be “hung out to dry” in this way by a major Jewish organization.

In recent years, however, a broader concern has arisen, namely the question of whether AIPAC is being true to its central vocation. That stated mission is “to strengthen, protect and promote the U.S.-Israel relationship in ways that enhance the security of the United States and Israel.” Are they still pursuing this goal single-mindedly? There is reason for doubt.

“We disagree with Reps. Omar and Tlaib’s support for the anti-Israel and anti-peace BDS movement, along with Rep. Tlaib’s calls for a one-state solution. We also believe every member of Congress should be able to visit and experience our democratic ally Israel firsthand.”

Remarkably, AIPAC garnered positive press from this statement, with a whole array of pundits and news outlets noting that “even AIPAC” had “condemned” the Netanyahu government’s decision.

But given how craven, stupid, xenophobic, undemocratic, and damaging to Israel in manifold ways was the action by the Prime Minister, I found AIPAC’s statement appallingly inadequate, and in fact embarrassing to me as an American Jew and a Zionist.

For starters, it led with a criticism of the congresswomen. That was the lede? Tlaib and Omar were not the newsmakers. The news was what Israel’s reckless government did in concert with the dystopian visions and demands of our dangerously amoral president. That should have been the lede.

But what was worse, and what belied the reports that AIPAC had condemned the decision, was that, in contrast to the direct and up front statement of disagreement with the Congresswomens’ positions, AIPAC could not bring itself to balance the statement with a direct criticism of what Netanyahu did.

It did not even say the minimal words “we disagree with Netanyahu” — words which themselves would have been grossly inadequate under the circumstances. Instead, it used the mealy-mouthed words “we also believe that….” It seems that the bar has been so lowered by AIPAC’s unwillingness to call out egregious and undemocratic actions by today’s Israeli government, that even this insipid circumvention of the clear need to disagree counts in the public mind as condemnation.

So we must ask, what of AIPAC’s stated mission to further American-Israeli relations and the integrity and security of Israel? Where is the severe criticism of a prime minister who is step by step undermining everything that Zionism is supposed to be about — including being part of the world rather than isolated from it, allowing Judaism to flourish in all its forms, not enshrining the backward-looking religious bigotry of the rabbinic establishment, etc. etc.

Where is the fear — that we all should have, and I certainly do — that this dark partnership between America’s and Israel’s current leaders will severely damage Israel’s welfare in ways we have not yet seen or imagined?

Above all, where is the T’shuvah that AIPAC owes the Jewish people for having apologized for, enabled, honored, and stood at the side of this “troubler of his own house” whom we are constrained to call “Prime Minister”?

I may be forced to call him Prime Minister, but I am not forced to honor and defend him as a guardian of Jewish honor and security as he troubles the Israel-U.S. alliance. And neither is AIPAC.

In the same way many of us are insisting in this country that the Attorney General is supposed to be representing the interests of the U.S., and not those of Donald Trump, AIPAC needs to understand that it is here to promote the American-Israeli alliance, and not to bow to the whims of Benjamin Netanyahu.

AIPAC will still try to insist that in its tweeted statement it took exception to what Netanyahu did. But it actually did not. It made a general statement about its beliefs about congressional access to Israel, but it never criticized the man and the government that crossed that line.

I don’t like many of Omar’s and Tlaib’s views either. But who is posing the real danger to Israel in this case? Two first year Congresswomen visiting Israel is not an existential threat. Except, that is, to people who do not really believe in democracy and who don’t really care a fig about American public opinion, including the opinions of passionate, Zionist, American Jews like me. Such people are, in actual fact, the serious existential threat.

This was the latest culmination of several years of what I would call “mission-distortion” or just “mission-neglect.” I hope that maybe, just maybe, there will be some long overdue soul-searching in AIPAC’s corridors.

I, for my part, will no longer be very silent about these things. Too much is at stake for those of us who love both of these cherished countries, which are today being hijacked before our eyes by the worst elements imaginable.

And I hope that rabbis who care about what is happening to Israel and to its alliances will summon AIPAC back to its rightful calling.