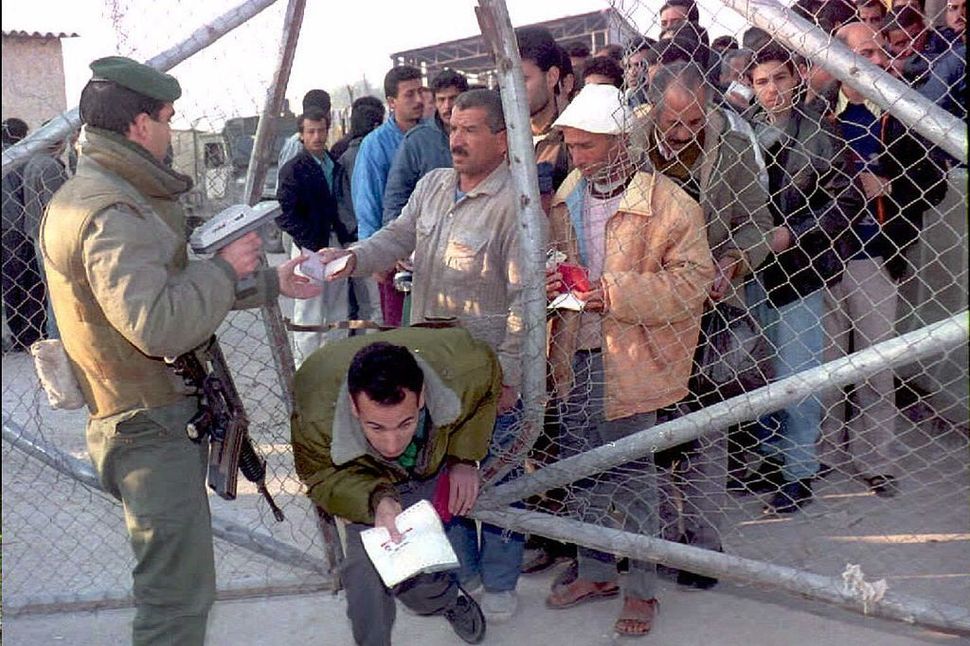 Palestinians at a Gaza checkpoint Image by Getty Images

You may not know that in addition to living under occupation and blockade, Palestinians must endure trolling on social media by the same forces that oppress us. It’s certainly not comparable to the daily, systematic humiliations, traumas, and abuse involved in living without civil rights. But there’s something downright dehumanizing about having to watch these abuses repackaged on social media as services for which we should be grateful.

That happened this week, when Israel’s occupation forces in charge of administering civil issues in the West Bank — the Coordination of Government Activities in the Territories or COGAT unit — posted a propaganda video on social media. Their latest message is a promo video starring a young soldier from Chicago named Alyse, who says that she “fell in love” with the Israeli unit that runs the occupied territories.

There is so much wrong with this. For starters, COGAT embodies everything that’s problematic about the occupation of the West Bank. It is a military unit in charge of civilian affairs, a perfect encapsulation of the problem with military rule over a civilian population without the right to vote for the government that runs the military.

But the video, which is not unique but emblematic of the kind of propaganda the Israeli military routinely produces, is deeply problematic in and of itself. It portrays Alyse as helping Palestinians, when she is in fact the face of their oppression. Her cheerful narration of her daily duties portrays COGAT’s work as assisting Palestinians entering and exiting the occupied West Bank, when what it does even more frequently is keep them in and keep their family members out, sometimes even endangering their lives.

It was these kinds of experiences that my family and I have been through that came to mind as I watched the video with my hands shaking and my heart pounding.

I thought about my late father, who died before my eyes in the blockaded Gaza Strip after COGAT prevented him from traveling to the West Bank for life-saving medical treatment. Gaza’s own hospitals and supplies were crippled by Israel’s blockade, and my family and I couldn’t find any medications but painkillers to give him. Even when my uncle in the United Arab Emirates managed to obtain some life-saving medicines for my father and tried to send them, it was no use. With rare exceptions, COGAT allows only paper mail into Gaza.

In his last days, my dying father longed for figs and other fruit, but thyme and duqqa were the only foods available in abundance under siege. One day I went door to door searching for fruit. After four hours, I had found nothing. I could not bear to bring myself back home that night until I was sure my father was asleep. The look in his eyes while slowly dying in confinement was crushing enough without having to face him having failed to assist.

Even after he died, COGAT’s heavy hand continued to prevent us from taking care of our father. It took us years to get concrete and marble for his tombstone, thanks to their ban on what COGAT calls “dual-use items.” These are any materials primarily used by civilians that Israel claims would be used for military purposes instead. (The list of banned items now ranges from building materials to sporting equipment, whittled down from an earlier iteration that included things like toys, nuts, chocolate, spices and toilet paper.)

The feeling of powerlessness, the memory of being unable to help my father, and the fear that the people I cherish most in Gaza are destined to suffer the same fate, haunt me more than anything else I’ve endured under Israel’s blockade. To see COGAT portrayed as a humanitarian service, which it played a hand in my own father’s death, is almost too much to bear.

It wasn’t only my father. My grandfather went through the same agony. He died from an easily treatable kidney problem because COGAT would not allow him to go to a hospital in the West Bank, nor would they allow enough fuel into Gaza to power the local hospitals. My uncles and aunts were not even able to comfort their lonely, dying father in his final days. Nor were they able to attend his funeral because COGAT would not let them into Gaza without an impossible-to-obtain and rarely-issued security permit, which takes months to be processed, with mostly “no” for an answer.

This the truth about COGAT. And yet, by simply by writing my own personal account, I am putting myself and my family at risk of retaliatory and punitive measures. Israel’s backlash against international activists — let alone Palestinians — for unfavorable press has been a recurring theme in the last few years.

At the same time, these anguishing experiences have taught me that Palestinians — and Israelis, too — aren’t necessarily destined to doom and suffering. Our suffering is preventable, because it is caused only by people’s cowardice, hate, or willful ignorance.

Palestinians share a unique shared history with our Jewish sisters and brothers: We both have intimate knowledge of pain, loss, dispossession and subjugation. It should be our strongest driver to act in solidarity with one another to prevent more harm from coming to our loved ones.

The solution begins when each side understands the pain of the other more deeply, instead of relegating one another to categories, statistics and quotas.

It is worth asking Alyse and COGAT to understand Palestinians’ quest for freedom and dignity instead of trolling us and expecting gratitude for the occasional crumbs of compassion they condescendingly throw our way.