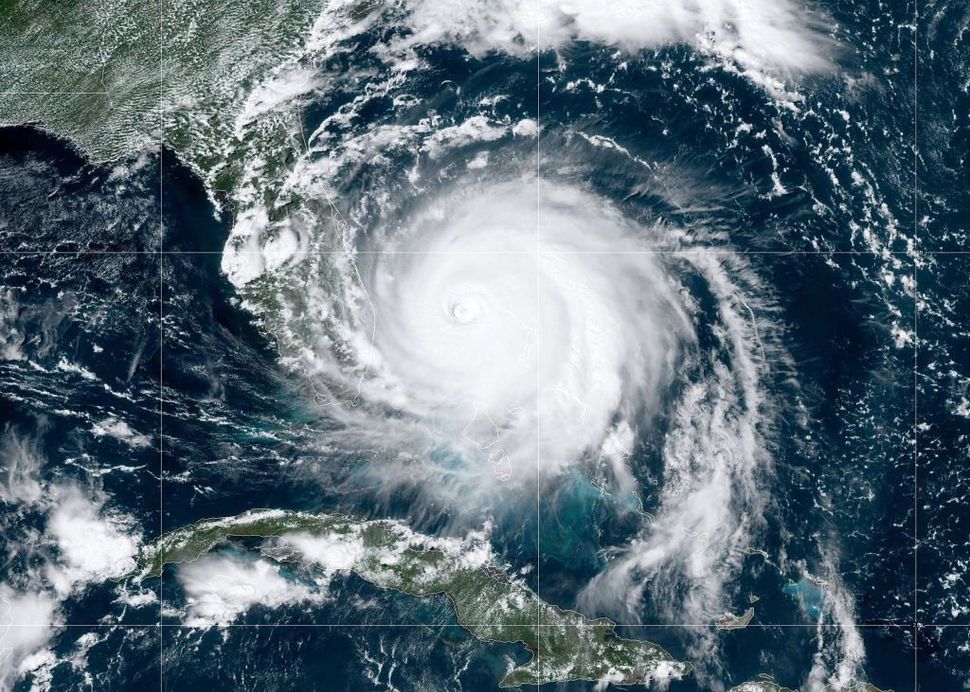 You may have heard this one: The story is told of the melamed, the wise schoolteacher, who was walking along the back streets of Chelm one dark night when he was accosted by a masked bandit with a large pistol.

“Your money or your life!” the bandit said.

“Take my life,” the melamed replied. “I’m saving my money for my old age.”

The story may be apocryphal — I haven’t yet found a source to confirm it — but its message is worth contemplating today. We have entered the lunar month of Elul, the four weeks of reflection leading up to the religious new year, Rosh Hashanah. But renewing the calendar isn’t the half of it. As we recite repeatedly in the holy day’s ritual, responding to the shofar’s blasts, this we considered the birthday of the world. Hayom harat olam. On this day the world was born. The bouncing baby born with a big bang.

Which raises the old birthday dilemma. What do you get for a planet that has everything? What’s the proper gift for a 4.5 billionth birthday?

Tradition may offer an answer. According to the Ethics of the Fathers, the sage Judah ben Tema used to say: Age 5 is for learning Bible, age 13 for mitzvot, age 30 for strength, 40 for understanding, 60 for aging, 80 for courage, 90 for wandering (alternatively, for stooping over), 100 is as though dead. Well, not much help there.

Let’s turn, then, to another traditional source. Hallmark used to say: First anniversary is for paper, 15th for crystal, 25th silver, 50th for gold, 75th diamond.

And for the 4.5 billionth, apparently, methane. Lots of it.

It’s a classy gift, and a real step up from the gift we’ve been giving for the last 200 years or so, carbon dioxide. Let’s face it, burning carbon is messy, smelly and leaves soot and smog everywhere. Methane is light, fresh, undetectable. It’s also up to 80% more powerful than carbon dioxide at turning our skies into a giant greenhouse, trapping the sun’s heat and cooking the planet.

About one-third of methane emission comes from bovine indigestion. It seems cow burps are soaring because global poverty is declining, which results in a steadily growing demand for meat.

A lesser source, but set to balloon pretty soon, is methane that’s been trapped for ages beneath the frozen Arctic tundra, the product of millions of years of rotting plants. It’s starting to burst into the atmosphere at a frightening pace as planetary warming defrosts the permafrost.

Most of the methane currently entering the atmosphere, however, is an unintended byproduct of fracking for natural gas, which was supposed to reduce the greenhouse effect but is unexpectedly boosting it.

This is just the latest in a stunning series of steps the administration has taken to dismantle programs that defend the environment, partly for profit, partly for the joy of watching liberals squirm and driving our foreign allies to helpless despair. You might call it the latest iteration of American exceptionalism, global Leadership negative-two-point-oy. It’s the same impulse that makes eight-year-olds pull the wings off of flies.

And it gets results. What’s frozen is melting and what’s liquid is getting warmer. Sea levels are already rising, regularly flooding coastal cities like Miami.

Sea surfaces are warmer, adding energy to hurricanes and turning them into devastating monster storms, bringing us once-in-a-century storms every two or three years.

Every month seems to bring another record-breaking calamity. The Amazon rainforest, Earth’s biggest recycler of carbon dioxide into oxygen, is in flames. So are Alaska and Siberia.

We like to kid Mother Earth, but this is serious. Scientists have been warning us with increasing urgency for a half-century. They said we were going to start feeling the effects by the year 2100 or so. They were off by 80 years.

The future has arrived. By current estimates, if we don’t start turning things around by 2030, stop burning carbon and emitting methane, we’ll pass a tipping point and the warming will build on itself until our grandchildren’s grandchildren inherit an uninhabitable planet.

So what’s stopping us? Too many of us simply don’t believe in science, don’t understand how cell phones and penicillin got here and don’t want to find out. Some are still trying to ban Darwin from middle school.

Some just can’t stand those smug, over-educated experts on the coasts with all their charts and numbers. Some see the danger but have more urgent battles to fight, beating back the benighted purveyors of bigotry, inequality and microaggression in the flyover states. Still others spend millions denying the obvious so they can keep selling oil and gas to pay for that second yacht.

Which brings us back to the schoolteacher of Chelm. In the end, he is us. Impending doom? I don’t have time to worry about it. I have more important things to do. It can’t be as serious as you say. Talk to me later. Burn my planet — I’m saving my money for my grandchildren.

It’s almost funny. One of God’s first commandments to us in Genesis was to “fill the earth and subdue it.” Well, we tried. We got the first part right, about filling the earth. But then the earth turned around and subdued us.