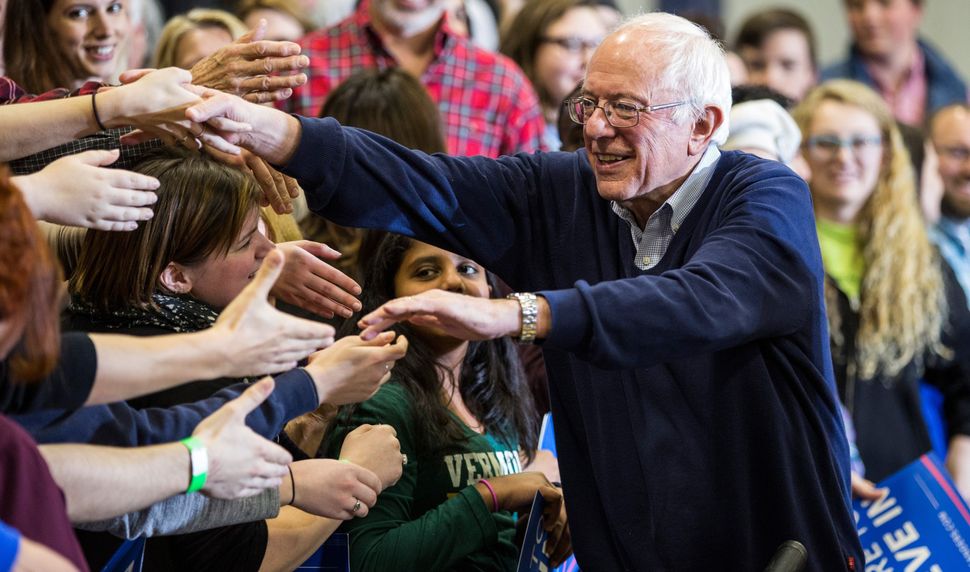 You might think that as American Jews are suffering the worst anti-Semitic violence in the history of the United States, they would be taking comfort in the fact that, for the first time, there is a Jewish candidate for president with a non-negligible chance of success.

They’re not. It turns out that Jews don’t like Bernie Sanders, the Senator and from Vermont who is among the top three contenders for the Democratic presidential nomination according to most polls. The opposite; a May poll found that the Jewish candidate was faring much worse among Jewish Democrats than among Democratic voters overall; Sanders was getting 19% of the Democratic vote, but 11% of the Jewish Democratic vote. And in July, my colleague Aiden Pink found that Jews formed a smaller part of Sanders’ major donor base than that of nearly every other candidate.

When you ask Jews why they aren’t drawn to Sanders, they often allude to his own seeming discomfort with discussing his Jewishness, encapsulated by a New York Times headline from 2016: “Bernie Sanders Is Jewish, but He Doesn’t Like to Talk About It.” Or, as JTA put it, “people are confused why Bernie Sanders won’t own his Jewishness.”

It’s something Sanders’ 2020 campaign seems to have wised up to, and Sanders has faced growing pressure from allies and from within his own ranks to be more personal, resulting in a number of interviews in which he’s discussed his personal history — what he used to denigrate as “gossip.” (None of these interviews have been granted to the Jewish press, and Sanders was not made available for an interview for this piece.)

But in this newfound openness, Sanders has not emphasized his Jewish background so much as his family’s immigrant background. Moreover, Sanders’ shift to the personal has come alongside a radical shift in Sanders’ position on immigration. Sanders has gone from supporting strong borders to proposing decriminalizing illegal border crossing in the space between his 2016 and his 2020 campaigns. And it may well have been his feelings about immigration, rather than his feelings about Hebrew school, that had Sanders evading discussions of his Jewishness for so long.

“If I might, as I return here to Brooklyn, let me take a moment to become personal,” Sanders told supporters at the rally launching his campaign in March. “I was born and raised a few miles away from here, in a three-and-a-half room rent-controlled apartment.” He explained that he “learned a great deal about immigration as a child because my father came to this country from Poland at the age of 17, without a nickel in his pocket. He came to escape the crushing poverty that existed in his community, and to escape widespread anti-Semitism. And, it was a good thing that he left Poland when he did because virtually his entire family there was wiped out by Nazi barbarism.”

Many viewed this speech as Sanders embracing his Jewish background, and even Jewish values. But if you look closely, Sanders isn’t describing a Jewish story so much as an immigrant one.

At the rally, he described himself as the “son of a Polish immigrant” rather than a Jewish one, something he’s taken heat for in the past. (“Nobody in Poland would have considered Bernie a Pole,” one rabbi noted wryly). Sanders then went on to describe the poverty of his upbringing, though not the community that shared this poverty. He described the hardship of his young life, but not the Yiddish language in which that suffering was expressed.

Of course, Jews, along with many Americans, were immigrants to this country. And the experience of being a poor immigrant is one that many Jewish families share. And a recent interview in Yahoo News included rare tidbits about his Jewish background, including youthful hijinx at Yeshiva and the Yiddish spoken at home. But even that interview was billed as “a rare interview about his immigrant roots” (emphasis mine). And rather than tying his history to the rise of anti-Semitism, for example, Sanders told Yahoo that his family’s story “makes the issue of immigration very personal.”

“I’m the proud son of an immigrant. And I think it is clear that we have got to stop the demonization of immigrants right now,” he said, once again leaving off the “Jewish” part of his immigrant parent.

It’s not that Sanders isn’t proud of being Jewish, something he has insisted upon, along with emphasizing the impact of the Holocaust on his worldview. Neither is this to say that Sanders’ story about being the son of an immigrant isn’t a moving one. It is deeply moving. His mother’s modest, unmet dream to own her own home, and her illness during which Sanders cared for her at the expense of his own schooling, give an emotional texture to the Senator’s policy proposals for Medicare for All, free college tuition, and a minimum wage hike, as well as his admirable, half-century long commitment to the vulnerable in our society. And his story of growing up in an unhappy home, made worse by a lack of means, a story that still haunts him, is one that tears at the heartstrings and humanizes the implacable Senator.

“There were arguments and more arguments between our parents,” Sanders wrote in his book “Our Revolution.” “Painful arguments. Bitter arguments. Arguments that seared through a little boy’s brain, never to be forgotten.”

It was these experiences which Sanders identifies as molding him. “My experience as a kid, living in a family that struggled economically, powerfully influenced my life and my values,” he said at his inaugural rally. And then he went off script: “I know where I came from!” He cried out movingly. “And that is something I will never forget!”

It was the poverty, rather than the Jewishness, that brought out the unusual burst of emotion.

The truth is, it makes perfect sense in the context of the 2016 election that Sanders wouldn’t want to talk about being Jewish. The 2016 primary was about how personal politics should be. Broadly speaking, it was a contest between the first woman candidate for president, Hillary Clinton, who represented identity politics and the importance of a person’s gender, race, and sexual orientation in the public sphere, and Sanders’ democratic socialism, which emphasized race-blind economic policies designed to help people based on class and income. “It is not good enough for somebody to say, ‘I’m a woman, vote for me’,” Sanders said in 2016. “What we need is a woman who has the guts to stand up to Wall Street, to the insurance companies, to the drug companies, to the fossil fuel industries.”

In a contest between identity politics and economics, Bernie was the economics guy. Of course he wasn’t going to start harping on his identity.

But Sanders’ economic policy also meant that he was stricter on immigration. In a 2015 interview with Vox, Ezra Klein asked Sanders whether someone who cares about the poor shouldn’t support open borders.

“Of course,” Sanders said. “That’s a right-wing proposal, which says essentially there is no United States.” It would make everybody in America poorer, Sanders said. “What right-wing people in this country would love is an open-border policy. Bring in all kinds of people, work for $2 or $3 an hour, that would be great for them. I don’t believe in that.”

Fast-forward to the Democratic debates of 2020, and Sanders joined the other candidates in supporting decriminalizing illegal border crossing, which is essentially an open-borders policy.

Sanders’ flip-flop on immigration is not mysterious; it’s the direct result of Donald Trump. Indeed, it’s evidence of the deep impact President Trump has had not only on the Republican Party but on the Democratic Party, too. Sanders, like all the other candidates save Joe Biden, seems to have resolved that running against the man whose legacy will be tearing babies from their mothers’ arms on the southern border means running on the exact opposite — letting anyone who wishes enter. And it’s in this context that Sanders found his childhood story newly relevant.

After all, it’s tough to bring up your immigrant dad when you believe that you can’t help the global poor “by lowering the standard of American workers.” And because Sanders views his family’s story as an immigrant story, rather than a specifically Jewish one, it took a shift in policy on immigration to make it relevant.

Sanders’ evolution hasn’t been on his Jewishness; it’s been on immigration, the new frontier of identity politics. And while there are many Jews who view those as connected, Sanders does not. Back in 2016, when he was asked about his spiritual life, he alluded to Christianity.

“What my spirituality is about is that we’re all in this together and it’s not a good thing to believe that as human beings we can turn our backs on the suffering of other people,” he told Jimmy Kimmel.

“This is not Judaism,” Sanders went on. “This is what Pope Francis is talking about, that we cannot worship just billionaires and the making of more and more money. Life is more than that.”