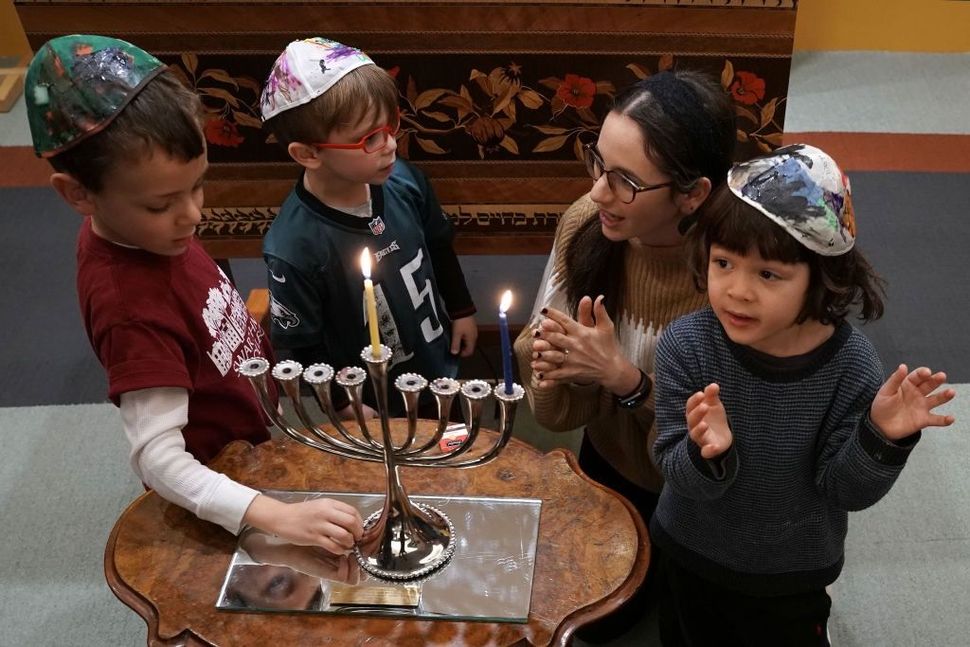 Children lighting a menorah in Washington Image by Getty Images

I’m reading Tzivia a book about Rosh Hashanah, about a community pitching in to help a little girl experience her favorite holiday tradition.

My Jewish five-year-old doesn’t know what a rabbi is?

“A rabbi is a person who leads a Jewish community.”

I struggle to find context to hang my words on.

“We don’t have a Jewish community here, but when I was growing up, I did. And we went to temple, a whole lot of Jews together, and the rabbi would lead the services. And we’d all sing together in Hebrew, and the rabbi would talk and ask us all questions about stuff, like how to be kind.”

She’s satisfied, ready to read the rest of the book. But half my mind is wondering if I’ve already failed my daughter, by marrying a gentile, by moving to a place without a Jewish community. Will I be able to make my culture her culture? On my own, will I ever be enough?

When my Jewish mom chose my gentile dad, it was a scandal. In Pikesville, Maryland, intermarriage was almost unheard of — prior to 1970, 97% of Jewish marriages in Baltimore were inmarriages —  and for six years, my Jewish grandpa wouldn’t even meet my dad. Finally, my parents eloped. Grandpa wanted to know his future grandchildren (me!), so finally, he welcomed my dad into the family.

As a child, I knew my other Jewish relatives didn’t intermarry, but I felt just as Jewish as my cousins. I went to Hebrew School, had a mezuzah on my door, and got bullied by Christians.

My Jewishness was my proof intermarriage was okay.

And so, unlike all my Jewish cousins, I married a gentile too.

My husband was stoked I had a culture to pass on. His openness confirmed my positive ideas about intermarriage. Yes, I heard all the talk about intermarriage leading to an erasure of Jewish culture, but I always disagreed: “No, it’s just the opposite. If everyone intermarries and keeps their culture, that’s twice as many Jewish families!”

But do intermarried Jews keep their culture? A 2013 Pew study found, “Among inmarried Jews, 96% are raising their children as Jews by religion (as opposed to ethnicity), compared to 45% among intermarried Jews.” For me, my Jewish religion and ethnicity feel impossible to untangle.

As a child who looked Jewish, I never questioned my Jewishness. I wasn’t half-Jewish. I wasn’t Jew-ish. My inherited Jewishness —  my dark curly hair, my family history of breast cancer — was unavoidable, and that helped me see my Jewishness in totality, rather than degree.

But my daughter? With her 25% Ashkenazi genes and her wavy light brown hair, she’ll pass for white, may even grow to think of herself as white. Yes, her mother is Jewish, but because she can fully pass, nothing feels automatic about her Jewishness. It’s on me and her bubbie to pass on the culture, to make her Jewish.

And I’m afraid, devoid of a greater Jewish community, I’m not going to do it justice.

At a book club discussion of So You Want to Talk About Race by Ijeoma Oluo, a white woman helped me realize how lucky I am to have Jewish culture.

“My ancestors weren’t just white,” she explained. “They had distinct cultures, but they came to America and saw the social and economic benefits of assimilation. They traded their cultures for white supremacy.” Not only do I benefit from white privilege, because I sometimes pass for white. Because my family didn’t assimilate, I have Jewish culture, and that is a privilege as well.

I have a culture. It’s a beautiful privilege.

It’s why my husband was excited to raise a Jewish child. He knows the value of culture because he feels the ache of living without one. Mainstream American culture never appealed to him. He always wanted to cast his lot with the others of the world, but couldn’t figure out how to do that in a way that isn’t problematic.

So it’s not really my white husband’s fault, nor my white dad’s, if our family’s Judaism is diluting. Both men were on board to raise Jewish kids.

It’s not my fault either, or my mom’s. Right?

I (sort of) know it doesn’t have to be anyone’s fault.

But maybe the problem is less the gentile parents and more our lack of community. We are friends with only one Jewish family in town (also intermarried). We celebrated a night of Hanukkah at their house, and it was revitalizing.

My daughter’s only five. I tell myself there’s still time to find Jewish community here, or to find it far away if we have to.

The Rosh Hashanah book I read to my daughter was Apple Days, and it arrived in the mail from PJ Library, a nonprofit that sends Jewish children a monthly free book.

My daughter loves receiving mail from PJ Library. She recognizes the white envelope immediately, finds our address with her name at the top, then insists on slowly ripping it open herself.

Until she asked me what a rabbi was, I didn’t realize just how vital these books are.

Our small town is over 90% white. I rely on diverse children’s books to show my child this is unusual, to expose her to a world full of races, ethnicities and cultures.

When she asked me what a rabbi was, I realized how much I rely on these books even to expose her to her own culture.

Her bubbie grew up in an insular Jewish community with Holocaust survivors and shop signs written in Yiddish.

Her mama went to Hebrew school twice a week, and some years, to Temple every weekend.

Her? Well, she has books.

Darcy Reeder is a writer in the Pacific Northwest, where she writes for Human Parts, Scary Mommy, Gen, Heated, and Raise Vegan.