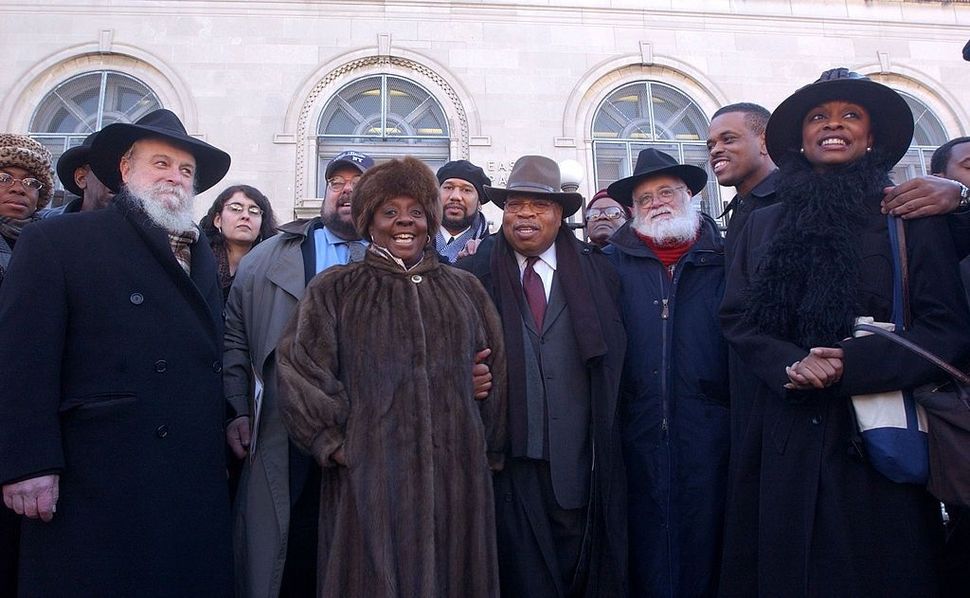 You may know that the NAACP was formed in the wake of the 1908 Springfield, Illinois race riots, a horrific event that left nine African Americans dead and countless injured or homeless from arson. But you may not know that American Jews made several important contributions, lending organizational, legal, political and financial weight to this nascent enterprise.

In my mind, that early 20th century partnership is still the proudest moment in the American Jewish experience. We can learn much about coalition-building today from the Jews and African Americans that worked together to help usher in the birth of the civil rights movement.

But sadly, the Jewish side of the alliance that founded the NAACP is largely forgotten today, and there’s a lesson in that, too.

In the immediate aftermath of the violence in Springfield, the entire country was shaken to its core. In response, scholar and activist W.E.B. Dubois formed a coalition of African American activists as well as white allies which he called the National Negro Committee in early 1909.

The first major Jewish leader to join the charge was Rabbi Stephen Wise, the head of the Reform movement in the U.S. Soon, German-born [Emil Hirsch], rabbi of Chicago signed on. Eventually, dozens of mainstream Jewish leaders followed suit, and by 1911 became founding members of the National Association for the Advancement of Colored People, the NAACP.

These early NAACP Jews had a variety of motives, including enlightened self-interest as well as an altruistic desire to help America live up to its ideals of equality and justice.

One of these early members was Louis Marshall, founder of the American Jewish Committee, who proclaimed when he joined that he would fight the Ku Klux Klan just as hard if it spared the Jews and focused only on “Negroes or any other part of our population.”

Early donors included Julius Rosenwald, CEO of Sears Roebuck, and Lillian Wald, suffragist and founder of the Henry Street Settlement. Herbert Lehman, Democratic Governor of New York in the 1930s and the son of German Jewish immigrants, served on the NAACP Executive Committee.

Two brothers, Joel and Arthur Spingarn, were the most committed. Joel, a literature professor at Columbia University, served as the first chairman of their board in the 1910s and then as the second president in the 1930’s. In 1930, he endowed the NAACP’s Spingarn Medal, an achievement award for which they continue to award annually to high achieving African Americans.

Joel’s brother Arthur Spingarn, a litigation attorney, was instrumental in leading the NAACP to challenge Woodrow Wilson’s re-segregation of the federal workforce and led the group’s legal defense fund.

I’ve learned two main lessons from this story. The first is pragmatic: the Jews and African Americans in those days focused first and foremost on results, and not on ideological purity. That is, they knew what they wanted to accomplish together and did not let disagreement about other political issues prevent them from working together. They did not use what today we call litmus tests of ideological compatibility to dictate whom they could and could not work with. If they required total agreement on every issue, they might not have gotten anything done.

The second lesson I’ve taken from the story of the NAACP Jews is the importance of bringing our Jewish institutions into our alliances with other communities. This will ensure that those alliances continue long into the future.

Let me explain. Many of the Jewish men and women who joined the NAACP were successful lawyers, bankers, activists, entrepreneurs and philanthropists. But many of them did so as individuals rather than working to formally include the Jewish organizations that were well established and powerful agents of justice and equality at the time.

They were passionate and did a lot of good to leverage Jewish-African American partnership and common goals. But because they did it mostly on their own, once they died, there was no real continuity of that partnership. Had they established formal partnerships between the NAACP and Jewish institutions — the Anti-Defamation League, for example — that partnership would still be going strong today.

The NAACP-Jewish relationship is something every Jew can be proud of, something we should all celebrate. But it is mostly relegated to the history books today.

The NAACP Jews’ successors, the Jewish activists and organizers who participated in the civil rights movement of the 1950s and 60s did make use of Jewish infrastructure to form alliances, and we still benefit from those alliances today.

So we American Jews should draw on both lessons as we build new coalitions and restore the old. First, be pragmatic. Avoid ideological litmus tests and be open to new structures in order to bring in the other communities as full partners. Second, engage as Jews and work through the Jewish community to ensure Jews remain a partner in the future.

American Jews have other political achievements, among them supporting the state of Israel, advancing the emigration of Soviet Jews, and reshaping Jewish-Catholic relations. We don’t diminish any of them by stating that reaching outside of our community to help found the NAACP may be our proudest legacy for us to date. It is a legacy that we can learn from today as we face new challenges in coalition building.