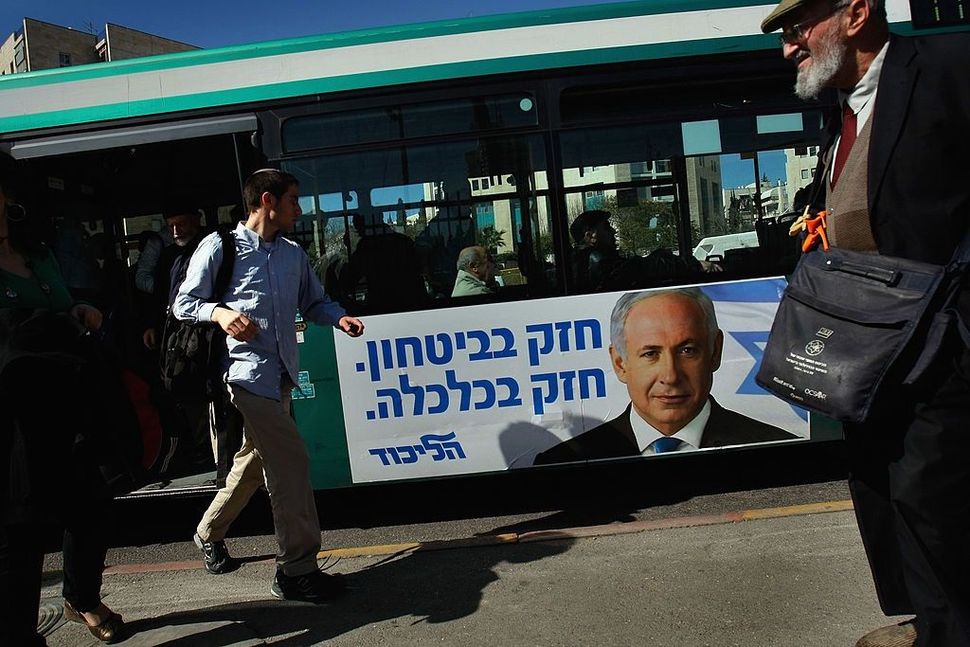 A campaign ad for Benjamin Netanyahu. Image by Getty Images

There’s a story that helps me explain to people why Palestinian citizens of Israel like myself don’t vote in Israeli elections. Mahatma Gandhi was once asked, “What do you think of Western civilization?”

“I think it would be a good idea,” Gandhi replied.

That’s how we Palestinian citizens of Israel feel about Israeli democracy. And that’s why thousands of us will be boycotting today’s election.

Israel defines itself as a “Jewish and democratic state.” But any Arab Israeli can tell you this is an oxymoron, reflected in a political system that discriminates against its Palestinian minority and strips Arab citizens of many of the national and civil rights accorded to Jews.

The Jewish Nation-State Bill declares Israel the “national nation-state of the Jewish people,” and officially designates Arab Palestinians — more than 20% of the country’s population — second-class citizens. The bill, which took effect last year, makes explicit what Israeli leaders have tried to mask for decades: Israel is a democracy only for its Jewish citizens.

Israeli Prime Minister Benjamin Netanyahu has had no qualms about disenfranchising Arab citizens. The Israeli Prime Minister never tires of reminding supporters that “Israel is not a state for all its citizens,” but “the nation-state of the Jewish people, and the Jewish people only.” Nor does he shy from telling Arab citizens that “other minorities have a national representation in other countries.” When it comes to Palestinian citizens, Israel’s longest-serving leader refuses to even offer Israeli democracy the dignity of hypocrisy.

True to his vision, Netanyahu has taken extreme measures to suppress Arab votes ahead of the election. He has demanded that cameras be installed in Arab polling stations to monitor Arab voters. He has accused Arab citizens of voter fraud, claiming Arabs stole the last election, and are plotting to steal this election.

He has backed attempts to ban and disqualify the Joint List, the Arab parties’ alliance, from running in the election. He has touted baseless accusations of Arab parties of supporting terrorism and conspiring to destroy Israel from within. And yet he allied himself with the far-right Jewish Power party, which consists of acolytes of the late Meir Kahane, whose movement even the US government considers a terrorist organization.

In a repeat of the last election cycle, Netanyahu has taken on a new round of fear-mongering and racist propaganda aimed at demoralizing and terrorizing Arab voters. Last week, he took to Facebook to warn his supporters against “Arabs who want to destroy us all — women, children and men.” The statement was so appalling it prompted Facebook to suspend Netanyahu’s official account for violating hate speech rules.

Netanyahu’s method seems to be working: Polls in Israel predict a low Arab turnout in this election cycle, which had already plunged to 49% in the last election. Reasons range from racism and discrimination to lack of faith in both Israel’s democracy and Arab parties.

But it’s not just Netanyahu’s objection to the very idea of universal suffrage that’s at fault here. For over half a century, Israeli leaders have supported the settlement of Jewish citizens on land populated by Palestinians — who, unlike the settlers, enjoy hardly any rights, including the right to vote for a sovereign parliament.

Israel may proudly proclaim itself the “only democracy in the Middle East,” but occupation and democracy are not compatible propositions. Meanwhile, to shore up far-right support ahead of the election, Netanyahu has pledged to annex the Jordan Valley and “all Jewish settlements” in the West Bank.

Palestinians in Israel haven’t fared much better. For decades, senior Israeli politicians have portrayed Arab citizens as enemies from within, a demographic time bomb, and a fifth-column population.

Is it any wonder that many Palestinian Arabs continue to view their Israeli citizenship as a mere political fiction, and refuse to lend legitimacy to what they view as a sham democracy?

Why should Arab Palestinians lend their imprimatur to an election that will only elevate those who would exclude them from political power?

For decades, Israel has divided Palestinians under its control by those who can vote and those who cannot; those living as second-class citizens within its borders and those living under occupation in the West Bank; those under siege in Gaza and in stateless limbo in Jerusalem.

As millions of Israelis head to the polls today, I will be joining thousands of other Palestinian citizens in boycotting the election. I refuse to participate as a fig leaf for a democracy that exists in name only, or to serve as a pawn for a state that exists for and of “the Jewish people only.”

I decline to take part in my marginalization and the continued oppression of fellow Palestinians beyond the border. And I stand in solidarity with the millions of Palestinians who are denied the right to vote and determine their own future.

Seraj Assi is the author of The History and Politics of the Bedouin. He is a visiting fellow at Georgetown University.