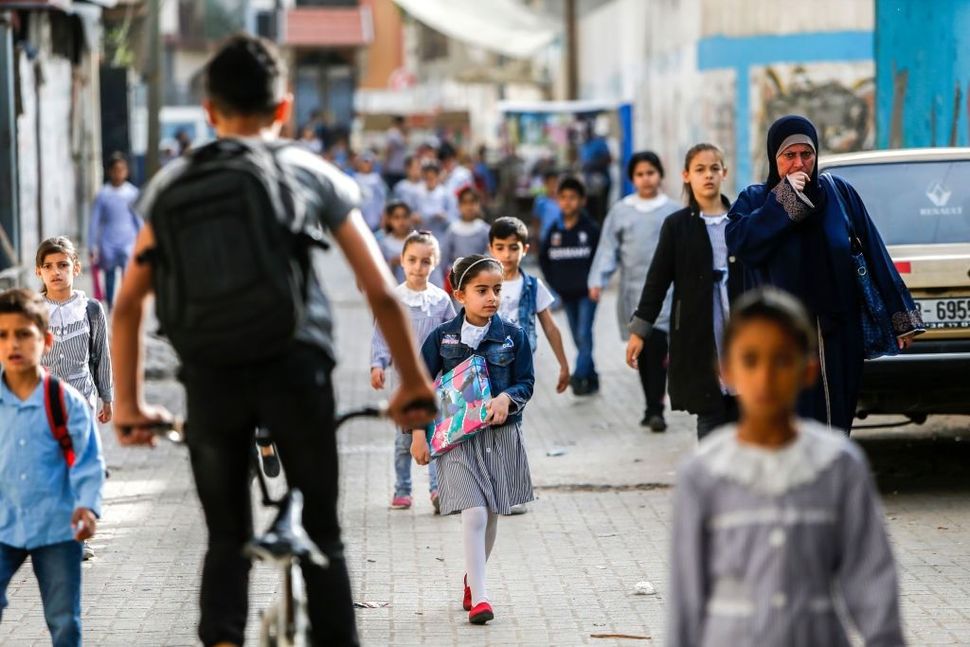 In his latest, brazen campaign promise on Tuesday, Israel’s Prime Minister Benjamin Netanyahu announced that, if elected, he would annex the Jordanian Valley. This action, which would cede about 30% of the West Bank to Israel, would essentially render the peace process moot, with a viable Palestinian state being virtually impossible under such conditions.

The announcement shook the international community, as Netanyahu no doubt hoped it would. It made the news in the biggest papers and drew comment from politicians all over the world. From the U.S. Congress, Alan Lowenthal, Bernie Sanders and Ilhan Omar rushed to voice their condemnation, with Omar accurately calling the plan “the nail in the coffin to a two-state solution or any peace deal.”

This is the nail in the coffin to a two-state solution or any peace deal.

Anyone who does not condemn this or take action to prevent it cannot credibly say they support a two-state solution.

But among Palestinians, the reaction was dramatically different. Despite the weight of Netanyahu’s threat, the story barely made a blip on our collective radar. There were few stories in our local media, but very little rhetorical backlash and no official response or civilian demonstration on the ground.

Why aren’t Palestinians sounding the alarm?

While it is frankly infuriating to watch Netanyahu shamelessly promise to bulldoze international law and global consensus, officially annexing the Jordan Valley would not really change the average Palestinian’s day-to-day life that much.

We already live under occupation and blockade. We already are deprived the right to vote for the government that exercises state violence against us. For the past five decades, we have had no personal or national self-determination, every aspect of our lives carried out at the pleasure of the the Israeli occupation.

After living this way for 50 years, an announcement like the one Netanyahu made this week feels like nothing more than a formalization de jure of what every Palestinian knows is already the state of affairs on the ground.

And unlike the Americans and other global observers, Palestinians are entirely numb after all we’ve been through with Israel’s military occupation. As a result, many of us just don’t have it in us to react anymore. We know that no matter how we react to Netanyahu, it will make no difference.

Sadly, this numbness doesn’t only apply to Netanyahu’s election stunts. It is an all-encompassing feeling towards this entire election. That’s because without the civil rights guaranteed to people living under a democracy, we know we will continue to have no power to vote our Israeli rulers in or out.

We don’t count in any equation because our voices can’t hold a single Israeli accountable for the injustices that make up our daily lives.

All we can do is sit and wait for whoever the Israeli public chooses, and pray that our next tormentors will be more gentle than their predecessors.

It seems, of course, unlikely, given that the two biggest parties — Netanyahu’s Likud and Benny Gantz’s Blue and White — both show no interest in ending the occupation. Indeed, after Netanyahu revealed his plan to annex the Jordan Valley, the allegedly centrist Blue and White Party insinuated that he had stolen their plan. And if that sounds crazy to you, consider that nearly half of Israeli Jews favor Netanyahu’s annexation plan, according to a survey on Tuesday, no doubt leading to the many politicians who say they want more restrictions, more collective punishment and more air raids on Gaza.

Those sentiments of anger, fear and hate are counterproductive. They effectively chain the Israeli public to a status quo that harms them. The problem is that while violence and hate can briefly quench the thirst of a vengeful few, in the longer run, it only begets more violence and provokes more hate. This will ultimately take its toll on Israeli and Palestinian lives.

Palestinians and Israelis can’t wish one another away. But they can secure their respective futures by coming together to reach a solution rather than defining Israeli victory in terms of Palestinian defeat.

There is no victory in tormenting a defenseless, isolated and impoverished population. There is only cowardice, a the desperate pursuit of political capital that inches Israel closer to abandoning its purported values entirely.

It requires no skill or courage to take the path of hatred and violence. And it will take true leadership, genuine will and a great deal of courage to commit to the path of peace until a permanent solution to this conflict is reached. But I hope Israelis find it in their hearts to act courageously and justly on our behalf, and vote for a better future.

Netanyahu is promising to destroy our hopes for peace and self-determination to appease an extremist and ignorant base. But the Israeli public should reject his empty promises. Instead of voting for hate, fear and anger, Israelis should consider the opportunities, security and prosperity that would arise from living in peace with us. There’s no other way.