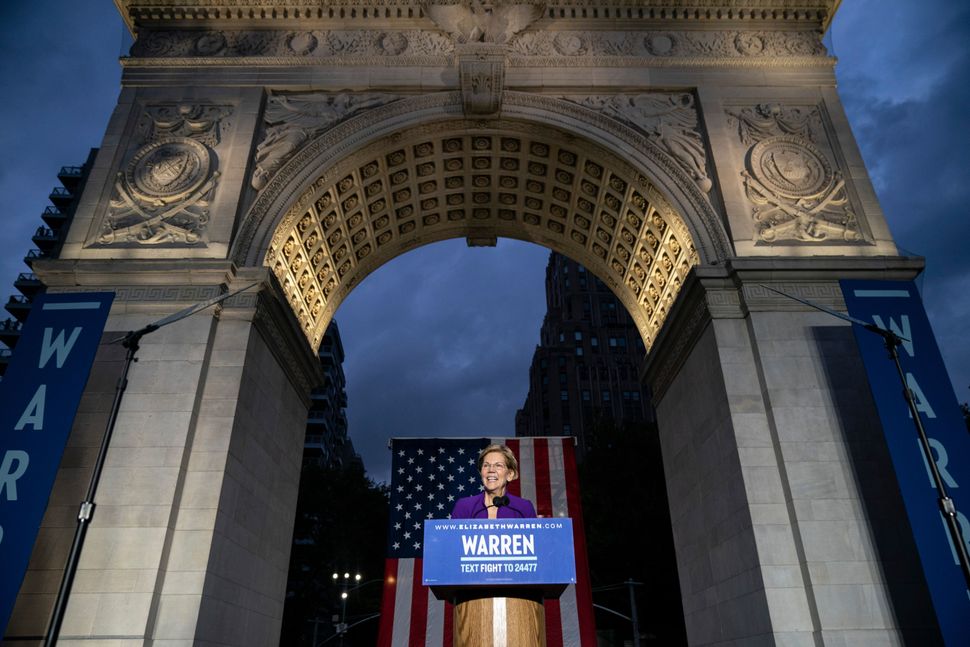 Last night, thousands of New Yorkers gathered in Washington Square Park to hear Senator Elizabeth Warren campaign for the democratic nomination. The crowd was electric, filled with hope as we took a one-night respite from Trump’s antics.

And when the cheers finally died down, Senator Warren chose to lead her speech with a very Jewish story: New York’s Triangle Shirtwaist Fire of 1911, which killed 146 industrial workers and injured hundreds more. Most of the victims were young women, mainly Jewish and Italian immigrants, and the tragedy would have been drastically mitigated had the doors not been locked to prevent the workers from stealing fabric or taking unauthorized breaks. 58 of the workers jumped out the windows, preferring to fall several stories to their deaths rather than be burned alive.

It was deeply moving to hear Warren discuss this story, so well known in Jewish circles as a galvanizing moment for Jewish American socialists and labor reform. As a Jewish woman whose family came to New York City from Eastern Europe in the early 20th century, I could have been one of the women in that factory had I been born a hundred years earlier.

And though it’s easy to view this tragedy as history, at its core, the Triangle Shirtwaist fire is a story about the weakest members of society being preyed upon by the strongest — in the exact ways they are today.

Because the truth is, this isn’t history. In high school, we were taught that the Triangle Shirtwaist Factory Fire was the catalyst of the Worker’s Rights Movement, the straw that broke the capitalists’ backs, after which America finally injected fairness into its economy. In our young minds, there was the time before the Shirtwaist Fire and Upton Sinclair’s “The Jungle” when six-year-olds worked in coal mines, and then poof! everything got better.

But as Senator Warren explained to supporters Monday night, there are startling parallels connecting the 1911 tragedy with the situation we find ourselves in today. Workers are still being mistreated in warehouses by greedy bosses who penalize bathroom breaks in the name of “good business.” Jeff Bezos, the richest man on earth (he’s worth $114 billion dollars and counting), is notorious for putting warehouse workers at risk with extreme heat, long hours, dangerous working conditions, and unrealistic performance standards.

There are countless articles online about employees peeing in trash cans to avoid falling behind their assigned pace, lest it interfere with Prime’s two-day-shipping guarantee. And it’s not just Amazon.

There are similarly disturbing stories out of Tyson, Purdue, Walmart, and countless other corporations operating both here and abroad, where there’s seemingly even less respect for human life.

Take Apple, the first company ever to receive a trillion dollar market valuation, who had to put nets outside of their Chinese factory windows to prevent working from committing suicide.

After the Shirtwaist fire, labor laws did improve, thanks to the grassroots organization of the Women’s Trade Union League, and advocates like Rose Schneiderman and Frances Perkins. New York State passed 36 reform factory codes over the next three years, and these groundbreaking laws spread across the country, giving way to a new era of workers’ rights (one with weekends).

Unfortunately, we seem to have veered off course along the way. Union membership hit an all-time low in 2018 at just 10.5% national participation. In Washington, Trump’s Labor Department has proposed loosening child labor regulations, allowing managers to take a cut of their employees’ tips, eliminating protections against LGBTQ+ discrimination, and that’s just the tip of the iceberg.

The reality is that corporations will continue to push labor standards lower and lower until someone puts a stop to it.

Now, it’s our job to step up like Jewish organizers in 1911 and take responsibility for our world. It’s our job to elect someone to the White House who will fight for those outside of the C-Suite, rather than someone who will eat a corn dog for the state fair photo-op before selling everyday Americans out to corporate lobbyists.

It’s hard not to feel helpless when facing down the barrel of a second Trump term. But last night, Warren used the story of the Triangle Shirtwaist Fire not as an example of tragedy, but one of strength and perseverance in the face of near impossible circumstances.

At a time when women weren’t even allowed to vote, thousands of garment workers went on strike and marched in the streets to improve their working conditions and wages. Frances Perkins lobbied with the newly formed New York Safety Committee to pass the fifty-four-hour bill, limiting women’s endless work schedules. She even went on to become the first woman to serve in a US Cabinet as Secretary of Labor under FDR, where she continued to advocate for workers’ rights. Fire drills, unobstructed exits, automatic sprinkler systems –– all are a direct result of the advocacy done in the wake of the Shirtwaist fire.

There are so many equally important grassroots movements looming large in present day: Black Lives Matter, #MeToo, the Parkland students. As I write this, Jewish activists across the country are standing up against the inhumane treatment of Latinx immigrants by ICE.

On Monday night, Elizabeth Warren reminded us of how important these movements are, especially when supported by like-minded individuals within the government.

Sophie Vershbow is the Senior Social Media Manager for a large book publisher. A lifelong New Yorker, her writing has appeared in Bustle, Huffington Post, Shape, Elite Daily, and more. Follow her on Twitter and Instagram at @svershbow.