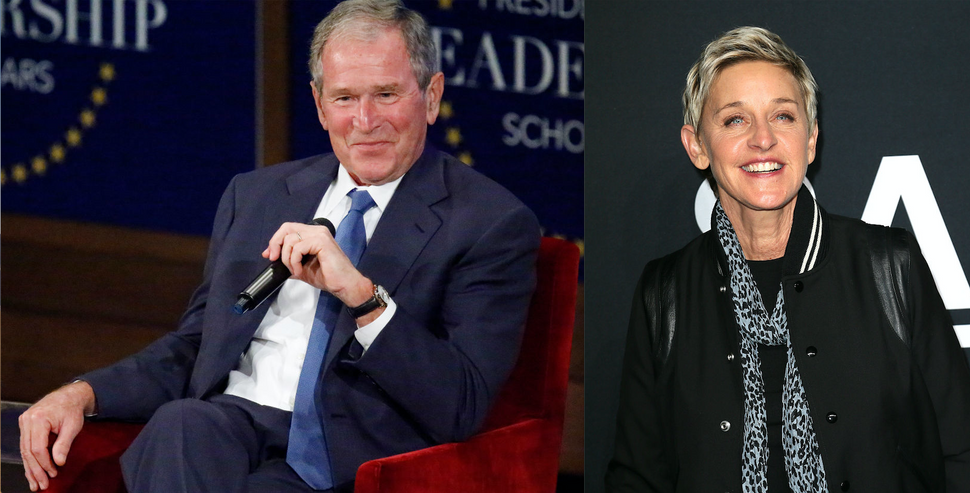 This week, a photo of comedian Ellen DeGeneres enjoying a football game alongside George W. Bush sparked an outburst of protests. Many denounced Ellen for legitimizing Bush, a man saddled with a legacy of anti-LGBT positions as well as the Iraq War.

Ellen, who appears to have been jarred by the vehemence, responded by releasing a video calling for kindness and understanding.

Yes, that was me at the Cowboys game with George W. Bush over the weekend. Here’s the whole story. pic.twitter.com/AYiwY5gTIS

In her defense, Ellen has every reason to feel singled out. Why should we pick on her, when nearly every aspect of America’s elite society tolerates war crimes without batting an eyelash?

They say love means never having to say you’re sorry; well, love can’t hold a candle to the U.S. foreign policy and national security establishment, where individuals who contributed to horrendous catastrophes are not merely forgiven, but routinely rewarded.

Let’s start with Bush. After incinerating Iraq, the ex-president took up painting. In 2017, Bush rolled out a book of his portraits of…wounded war veterans.
Take a moment to absorb that. The man responsible for a disastrous war that maimed thousands of soldiers published a feel-good book of paintings of maimed soldiers.

Under any normal interpretation, Bush’s book shouldn’t exist. It’d be like having Matt Lauer narrate a documentary about the #MeToo movement. It nags at the brain, causing a moral short circuit. And yet, the Lauer documentary would never happen, while Bush’s book was approved, published, reviewed, and is available for purchase.

But it’s not like Bush got special forgiveness because he was president. John Yoo was a Bush administration lawyer who spearheaded the creation of legal framework justifying government-run torture. Today, Yoo is a full professor at the elite University of California Berkeley law school.

It’s unclear how employing the man who was instrumental in making terms like “waterboarding” and “rectal hydration” part of America’s lexicon fits into UC Berkeley’s mission statement, yet there he is, educating the next generation of attorneys. Yoo is also given the privilege of writing about ethics in the New York Times and the Washington Post.

The reality of America’s policy circles is that nearly all Iraq War architects sailed on to lucrative, privileged positions in think tanks, media outlets, and lobbying firms. The only ones to experience consequences (other than the dead and mutilated soldiers, their families, and hundreds of thousands of Iraqis) were low-level GIs caught up in the Abu Ghraib torture scandal. The only prominent individual to express prolonged remorse was Colin Powell’s chief of staff Lawrence Wilkerson, who apologized for his role in Iraq and dedicated himself to preventing future reckless overseas adventures.

Nor is this fount of forgiveness limited to those who brought us Iraq. Earlier this year, Donald Trump appointed Elliott Abrams to be U.S. special envoy on Venezuela.

As many wrote at the time, Abrams spent the 1980’s supporting some of the worst atrocities of the Cold War. The death squads and dictators he championed left a trail of bodies and war crimes across Central America that even Hannibal Lecter would consider gratuitous. Along the way, Abrams was also convicted of lying to Congress about Iran-Contra.

Far from suffering consequences, Abrams went on to enjoy privileged board positions — as well as help orchestrate the Iraq War — prior to becoming Trump’s Venezuela envoy.

Bear in mind, Abrams’ record is not only extensive, but exhaustively chronicled: there are books and cover stories on the El Mozote massacre he vigorously downplayed; in 2013, Guatemalan courts found Efraim Rios Montt — one of the many dictators championed by Abrams — guilty of genocide. The fact that members of DC’s foreign policy circles felt emboldened to publicly defend Abrams shows just how entrenched the culture of impunity is in Washington.

Lastly, lest you think this forgiveness doesn’t extend to the heinous figures in the Trump administration, I give you former Secretary of Homeland Security Kirstjen Nielsen.

This April, Nielsen’s resignation prompted many, including a New York Times columnist, to preemptively warn us about the woman responsible for carrying out Trump’s sickening policy of caging immigrant children receiving cushy sinecures.

It took less than six months for Nielsen to be invited to do a speaking gig at the prestigious Atlantic Media event.

Given all that, can we really denounce Ellen as doing anything out of the norm? She is, in her sweet, huggy way, simply giving Bush his due. Her actions are no different from those of our elite institutions, where the war crimes of the privileged hold as much weight as a youthful indiscretion like a toilet paper prank. Everyone makes mistakes.

Perhaps this’ll change in the future. Perhaps we’ll have a #MeToo foreign policy moment one day, when we’ll decide those who helped destroy countless lives at home and abroad should be held accountable, or at least not be rewarded.

It could happen tomorrow, or years from now, or not at all. But until it does, let’s save the righteous indignation over Ellen’s sweetness. As the old saying goes, don’t hate the player, hate the game.