This piece is part of a series for the one year yahrzeit of the Pittsburgh Tree of Life synagogue massacre.

It required the passing of 11 months — a year of work and worry, a year of reflection, a year after the murder of 11 Jews at prayer — for me to reach full clarity about what had happened three blocks from my home, at the corner of Wilkins and Shady Avenues in Pittsburgh’s Squirrel Hill neighborhood.

One month, perhaps, for each worshiper killed at the Tree of Life synagogue on that fateful October morning in a half-empty sanctuary now wiped clean of even the last molecule of blood, now as much a symbol as a synagogue. The same number of months that observant Jews daily recite the Mourner’s Kaddish for a lost parent.

It took travel to another synagogue, in another country, for me to see fully what had occurred. Then at Kol Nidre, in the prayer book we were using at Montreal’s Temple Emanu-El-Beth Sholom, I found a sentence that — after the multitude of sentences I read, and the many that I wrote in the hours, days and months after the shooting — rendered the tragedy comprehensible, though surely not acceptable:

Avinu Malkeinu, remember those slain for their love of Your name.

There it was, and so it was for those killed at Tree of Life. They died defending their faith, for in an era where new blood flowers of anti-Semitism bloom — and it is perhaps no irony that the actual blood flower is an annual — the very act of observing Jewish rituals, or attending services, has become an act of defending our faith.

The tragedy at Tree of Life, a congregation named for that resilient metaphor describing the Torah itself, has marked Jews, Squirrel Hill, even Pittsburgh in the public consciousness. For those of us who are the synagogue’s neighbors, the wound is especially deep, and raw.

I was at the time of the shooting the executive editor of the Post-Gazette, which has an unusually intimate relationship with Squirrel Hill. It is where many of the paper’s journalists live — I passed that corner nearly every day — and it is a core of the paper’s circulation base. Walk the streets in the early morning hours, and the green bags holding our paper line the lawns.

I am very proud of the coverage our paper provided at that horrible hour, written, as the Yom Kippur service put it, in an alphabet of woe. We spoke to Pittsburgh, and we spoke for Pittsburgh — for its tradition not merely of welcome, not merely of tolerance, not merely of inclusion, but of deep respect and affection for people of all faiths.

Squirrel Hill had, and has, a special role for Jews. Unlike Boston, unlike New York, unlike Philadelphia, unlike Chicago, the the center of Jewish life did not migrate to Brookline, Scarsdale, the eastern Main Line or Glencoe.

There are vibrant Jewish communities, to be sure, in the Pittsburgh suburbs of Fox Chapel and Mt. Lebanon, but Jewish life is incontrovertibly centered in the city, in Squirrel Hill. It’s a place where the Dunkin’ Donuts and the Italian ice place have kosher certification; where time is kept by the clocktower with the Hebrew numbers on the Jewish Community Center; where there is both a mikvah and a matchmaker; and where one of the parlor games is to count how many synagogues there are in the neighborhood. (Together with my friend Ed Feinstein, a member of the Reconstructionist congregation Dor Hadash that met in the Tree of Life building, we came up with 11 over lunch one day. Maybe we double-counted one or two of them. Maybe we left a few out.) 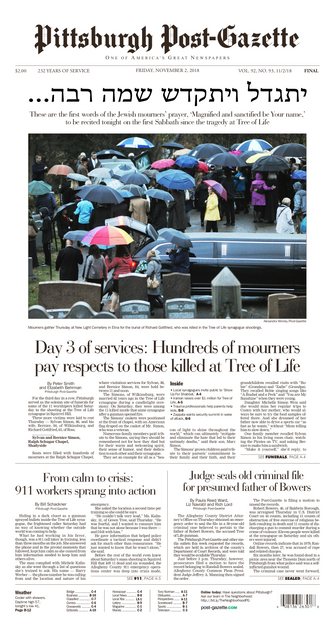 In the end, it was possible to share the pain of our neighbors and our readers, and it was possible to express solidarity amid the sadness with the families of the survivors. We did it with our coverage, which top editors insisted be compassionate, and we did it with our interactions with our sources and subjects: the police who rushed to the scene with bravery and selflessness; the doctors and nurses whose quick work saved lives; the faith leaders, whose resilience and resolve beggared belief, though belief was at the core of what they were doing.

And it was possible to join in the mourning even as we retained our professionalism. For we found that both were essential, both were indispensable.

And so it was that we came to print a banner headline in Hebrew, on the Friday morning following the Saturday shooting, reaching readers perhaps 12 hours ahead of the first Shabbat in this new era, a Shabbat where there would be no Shalom. We used massive black letters: the first four words of the Mourner’s Kaddish.

The idea for the headline came — wonder of wonders, miracle of miracles — as a jolt in the middle of the night. Without reflection or hesitation, an explanation for the decision spilled from my lips, and then from my keyboard as I wrote a letter to readers: When you conclude there are no words to express a community’s feelings, then maybe you are thinking in the wrong language.

It turned out that an excerpt from a 10th century prayer was the appropriate gesture — of respect, of condolence — for a 21st century audience mourning its dead, whether family, friend, congregant, neighbor or, simply, Pittsburgher. The goal: To use those words, known by heart by regular Shabbat observers, to bring our readers to the heart of the incident that so sadly marked our community, and to display the heart of our community.

The headline also prompted me to write perhaps the most extraordinary correction in the history of American journalism, explaining that the original prayer was written in Aramaic. Thus the final letter of the fourth word should have been rendered with an aleph rather than with the hay we employed that day.

It was then, as it is now, essential — in all moments, but in this moment especially — to get things exactly right. But here is one of the lessons of Tree of Life: Repairing the word is one thing, repairing the world quite another.

David Shribman, executive editor emeritus of the Pittsburgh Post-Gazette, led the paper’s coverage of the Tree of Life shootings that won the 2019 Pulitzer Prize. This year he is a visiting professor at McGill University in Montreal.