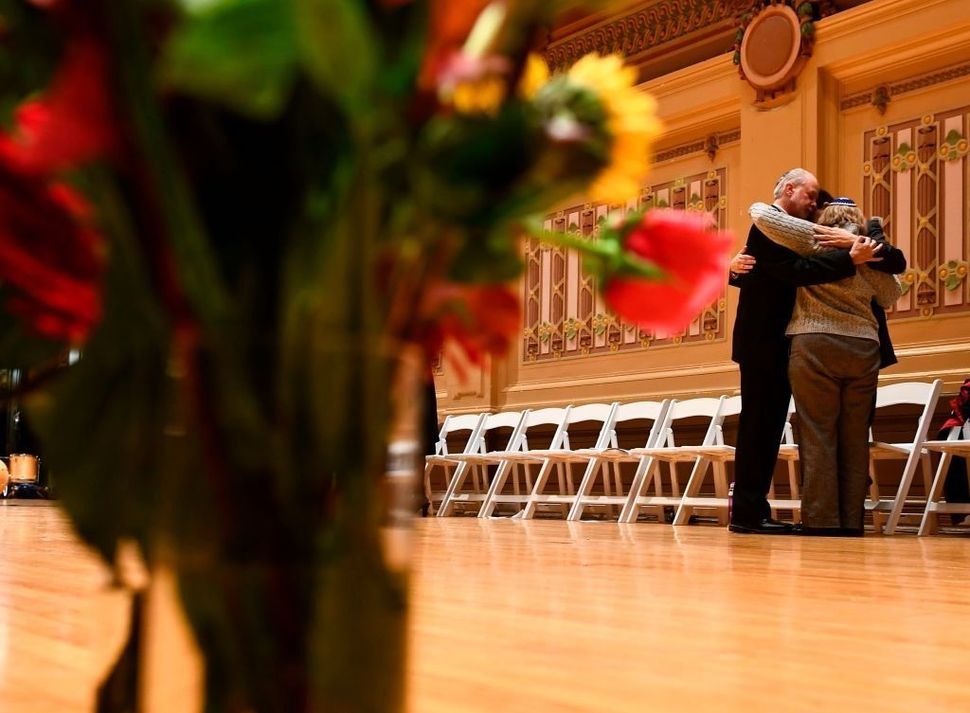 “We are all still standing,” said Rabbi James Gibson Tuesday morning. We spoke by phone as he prepared for the first of the funerals for victims of Saturday’s horrific shooting in Pittsburgh.

Gibson is the senior rabbi at Temple Sinai, a Reform congregation in Pittsburgh’s Jewish enclave of Squirrel Hill. His shul is less than a mile from Tree of Life synagogue, the site of the massacre.

“It has been pretty much nonstop since mid-morning on Shabbat,” said Gibson, 64.

In this close knit urban neighborhood, it is a given that Gibson has been an integral figure in an interdenominational group of rabbis and other community leaders ministering to the entire Jewish community here.

In the wake of the catastrophe, stories of this historically rooted, interconnected community coming to one another’s aid have made the rounds through social media and international outlets.

But locals say they treasure not only the resilience and mutual support from their neighbors, but also the denominational diversity and harmony of Squirrel Hill’s Jewish community – which many say is entirely unique to this community.

Their strong sense of unity as Jews means that intermingling of Orthodox, Conservative and Reform communities at both an individual and an institutional level is commonplace. Interdenominational friendships, festivals, schools and summer camps dot the area.

“This notion that we are all in this together pervades everything we do,” said Rabbi Gibson. “We all feel very enmeshed in each other’s lives here.”

As the longtime heart of Jewish Pittsburgh, the neighborhood is home to 20 synagogues and over 10,000 Jews within just a few square miles. In this cramped part of town, there are very few topographical boundaries keeping the various communities apart and people from different parts of the Jewish cultural-religious world live side by side sharing both public and religious spaces.

The Tree of Life synagogue is itself an example of this radical unity. The Conservative temple shares its space with two other congregations: Dor Hadash, a Reconstructionist shul and New Light, a conservative congregation.

Shani Ferguson, who lives in Philadelphia now, grew up attending Dor Hadash, recalls a childhood of feeling welcome in all types of homes and temples.

“There were Orthodox families, Conservative and Reform families,” Shani Ferguson “But in Squirrel Hill, you were just a Jew.”

Rabbi Gibson, 64, who did not grow up in the area himself, says that after 31 years here, he too has found this sense of identity as Jews above all is somewhat distinct here.

“My friends and my study partners here range throughout the breadth and depth of Jewish life,” said Gibson. “We really do feel an incredibly strong bond with each other that I have not necessarily found in other cities.”

Before the shooting, this mutual cooperation and interdependence was most evident two years ago, when organizations from all sects came together to build a new mikveh. Previously, the city’s only one was in a dilapidated former house in the neighborhood.

“That it had the support and financial donations from all the communities including the reform community, was really extraordinary,” said Gibson. “Because we depend on that mikveh too, to do conversions, and to send our brides before weddings.”

Leaders and scholars from Pittsburgh and around the country agree that Squirrel Hill’s style of communalism is unique in 21st century America. And while they agree that long-term proximity is a major factor, the question of why Pittsburgh Jews remained together is not entirely settled.

Unlike most Jewish communities in the 20th century, people in Squirrel Hill never fled to the suburbs in great numbers, enabling them to foster somewhat old-fashioned intergenerational faith community.

“I grew up in Detroit, where the Jewish community seemed to move five miles every five years,” said Butler. “But in Pittsburgh, we have natural borders. It’s a triangle, we have parks on all sides so there’s only so far you can go.”

Historian Dr. Barbara Burstin at the University of Pittsburgh agrees, but says there is more to the story.

“Within a few city blocks, you have the Yeshiva, modern Orthodox, Reform, Conservative, Reconstructionist, you can find all of that within a square mile. It’s uncanny how close everything is,” said Burstin. “And so that has to rub off. You can’t have such close proximity and not have a feeling that we’re all the same.”

“Some of the most desirable or equivalent communities outside of Pittsburgh, frankly, were not welcoming to Jews, so that certainly was an issue,” said Burstin.

Rabbi Michael Berger, professor of religion at Emory University, says Pittsburgh’s Jewish communities were somewhat protected from the forces that caused other cities’ communities to splinter.

“In the 1950s and 60s, when American Jews moved out of their cities, they tended to do it with the rest of their demographic,” said Dr. Berger, a native of Brooklyn. “Orthodox people all left around the same time and went to suburbs near each other. When the Reform people moved out of the city, they more or less of moved together.”

He says Atlanta was actually close-knit like Squirrel Hill until the 1950s, when the federal government built a free way through its Jewish hub, destroying many old buildings and gathering spaces. “After that, there was less keeping the Jewish community in place and people just fragmented and left,” said Berger. “But Pittsburgh avoided that.”

Others say it was Squirrel Hill’s proximity to the city’s downtown business district, educational institutions and healthcare campuses, all of which are extremely commutable by both car public transit. And these aspects are attractive not only to Jews, but to Pittsburgh’s residents as a whole.

“People of all kinds come for professional schooling and then they don’t want to leave,” said Dr. Butler.

Rabbi Gibson agrees. “The proximity of Carnegie Mellon, the University of Pittsburgh and its hospitals have played a huge role in keeping jobs close by.”

He says that Orthodox families in particular need to be within walking distance of synagogues and Jewish centers. In turn, the local Jewish schools and stores that cater to their needs stay put as well.

Rabbi Gibson says he is grateful for the solidarity among different Jewish organizations as well as clergy and lay people from nearby churches and mosques.

“The offers of help between each other here in the community for those affected has been so overwhelming that it is challenging when people call to say they want to come in and help us when we’re already there, with and for each other,” Gibson says.

She says that the shooting has brought back a lot of memories of her old home, and while her adopted city of Philadelphia had plenty of interaction between various denominations, she feels that it’s not quite as integrated as Squirrel Hill.

“I miss it,” said Ferguson. “And I sometimes regret that I’m not raising my children there.” She is devastated that Squirrel Hill is now a household name as the site of the worst anti-Semitic attack in U.S. history, when it should be famous for its unique Jewish heritage and nurturing character.

Virginia Jeffries is a reporter and student at the CUNY Graduate School of Journalism in New York City. She was born and raised in Pittsburgh’s Squirrel Hill neighborhood.