One Year Since Pittsburgh: The Danger of False Equivalence on Anti-Semitism 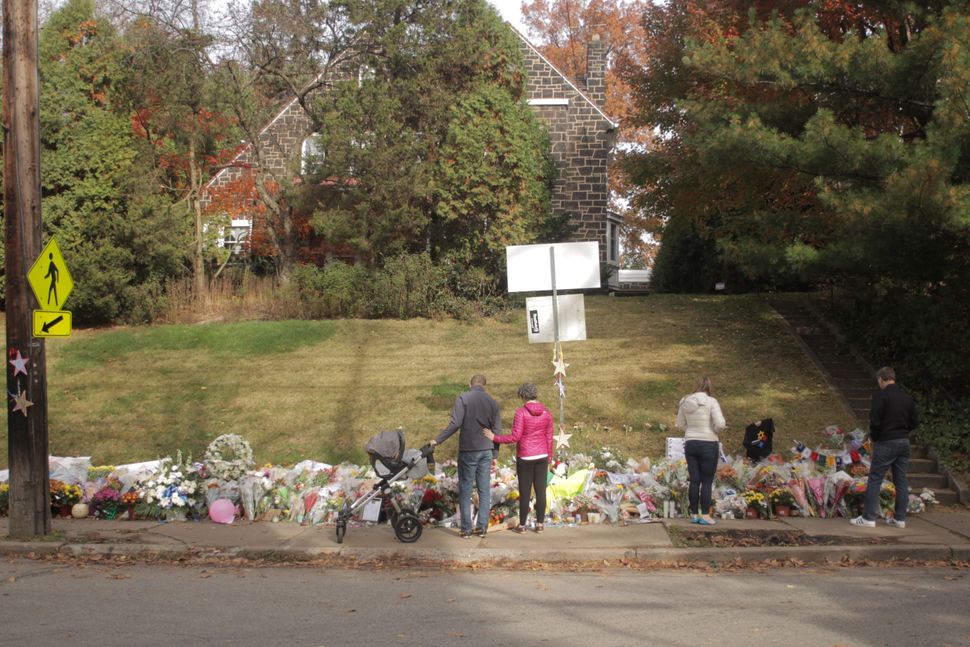 People visiting the memorial laid down a block from the Tree of Life synagogue. Image by Ari Feldman On Wednesday, President Trump visited Pittsburgh to attend an energy conference, where Jewish protestors interrupted his speech demanding he “stop endangering Jews.” In the city where a year earlier 11 worshipers were tragically killed in the deadliest attack on Jews in American history at the Tree of Life Synagogue, the protest was met with ridicule by President Trump and derision by an angry crowd.

With a wink and a nod to the “very tough people” in the room, Trump suggested that the crowd in Pittsburgh should endanger the peaceful protestors. The next day, he tweeted a video of his mockery to amplify his callous message, in which said: “don’t hurt ‘em. They don’t know they’re dealing with very tough people in this room.” The audience then laughed and applauded President Trump’s implicit threats of violence targeting the Jewish protesters.

This incident underscores the extreme danger posed by a president who has normalized hatred, and whose rhetoric and policies have inspired an unprecedented rise in violence targeting Jews. Since last year’s horrific shooting, we have seen a record high number of anti-Semitic incidents, and 12 white supremacists have been arrested for anti-Semitic terrorist plots similar to the synagogue shootings in Poway, Calif., and Pittsburgh.

As we remember the 11 lives lost one year ago, it is incumbent on us to also recognize that the primary source of threats to American Jewry come from white nationalists inciting and perpetrating violence. Any suggestion otherwise creates a false equivalence between virulent hatred and incitement to violence on the one hand, and a range of views on Israel – some driven by anti-Semitism – on the other.

President Trump’s repeated use of anti-Semitic, xenophobic and racist rhetoric has emboldened hate groups to become more public in expressing their dangerous vitriol. From the campaign trail to the Oval Office, Trump has publicly appealed to white nationalists and invoked the anti-Semitic tropes, symbols and conspiracy theories tracked here. This has directly corresponded with an increase in anti-Semitic incidents, which rose 60% during Trump’s first year in office, the largest single-year increase on record.

There has also been a 30% increase in the number of hate groups operating in the United States coinciding with Trump’s candidacy and presidency, with 2019 marking the highest number on record, according to the Southern Poverty Law Center. Counties that hosted Trump campaign rallies in 2016 reported a jaw-dropping 226% increase in hate crimes, and more than half of all religion-based hate crimes in 2017 targeted Jews.

These numbers reveal a troubling and unequivocal pattern – the U.S. president’s rhetoric has directly emboldened those threatening and murdering Jews.

Just as President Trump infamously equated neo-Nazis with those peacefully protesting them in Charlottesville, he has also contributed to a false narrative surrounding anti-Semitism “on the right and the left” when no such equivalence exists.

On the right, there is a growing movement that poses a physical threat to our security. Right-wing extremists were responsible for nearly 100% of all extremist-related killings last year, according to the Anti Defamation League. The shooters in Pittsburgh, Poway and El Paso were all white nationalists whose hatred was nurtured and spread in online platforms. The manifestos of the Pittsburgh and El Paso shooters echoed – verbatim – Trump’s deceiving references to an immigrant “invasion,” which motivated the Tree of Life shooter to target those he blamed for ushering in migrant “invaders.”

This growing threat has directly contributed to the need for increased security at our synagogues. Do you have to pass through a metal detector to attend high holiday services or drop your children at Sunday school? Well, I do, and it’s not because of any member of Congress’ views on Israel.

Jews understand this threat, and nearly three-quarters of us feel less secure than we did two years ago. According to a May poll conducted by the Jewish Electorate Institute (JEI), the majority of Jewish voters blame President Trump, at least partially, for the two synagogue shootings in the past year.

JEI recently conducted focus groups that examined Jewish voters’ perceptions of anti-Semitism, and this new research demonstrates that Jews believe threats to their safety largely stem from the actions and violence of the far-right. When asked specifically about rhetoric “on the left” widely perceived to be anti-Semitic, focus-group participants agreed it was fundamentally different than the physical threat posed by white nationalists targeting Jews.

President Trump has repeatedly tried to deflect attention from his responsibility for the rise of anti-Semitism by pointing to his embrace of Israel’s prime minister; using charges of anti-Semitism as justification for open racism directed at members of Congress; and alleging that Jews who vote for Democrats are either misinformed or “disloyal.” He’s also tried to distract and confuse with the narrative of false equivalence, which has been echoed in the press.

A recent study of press coverage of anti-Semitism in the past year conducted by Media Matters reveals that the media has focused on the perceived anti-Semitic rhetoric of the left more than it has covered anti-Semitic violence and actions of the right. Additionally, when looking specifically at rhetoric, 73% of the coverage focused on the left; the majority of which came from Fox News.

We must speak out against all forms of anti-Semitism, but we shouldn’t equate a range of views and voices on Israel – some of which are highly objectionable and even anti-Semitic – with the physical threat posed by those aiming to kill Jews. Anti-Semitism shouldn’t be viewed through a partisan lens and must be fought wherever it may emerge. We must also be clear-eyed about what poses a threat to our physical safety, and that of Jews around the world. White nationalist ideology has been embraced and emboldened by the man currently sitting in the White House, who is likely tweeting vitriol at some individual or group right now.

For the Tree of Life community, it’s too late for meaningful change that will bring back the 11 lives tragically lost one year ago. But it is not too late to recognize and properly identify the threat facing us all, and do more to – in the words of the courageous protestors in Pittsburgh this week – implore President Trump and all our elected officials to “stop endangering Jews.”

Halie Soifer is Executive Director of the Jewish Democratic Council of America, and a former senior policy advisor in the Obama Administration and national security advisor in the Senate.

One Year Since Pittsburgh: The Danger of False Equivalence on Anti-Semitism