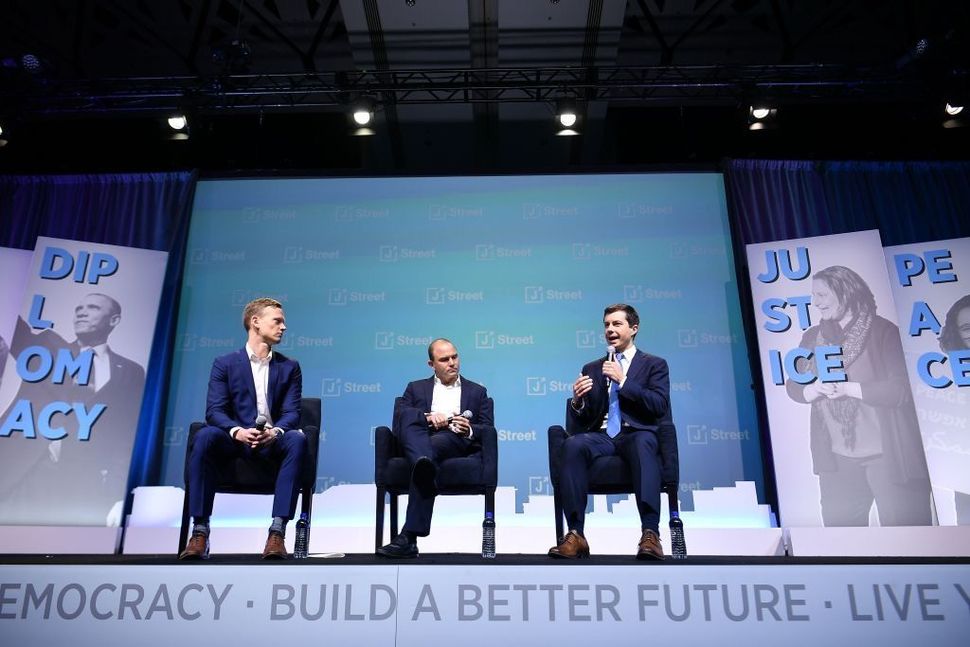 This week at the J Street Conference, Bernie Sanders said he’d tell the Israeli government that, “if you want military aid you’re going to have to fundamentally change your relationship to the people of Gaza.” Pete Buttigieg promised to ensure that American “funding is going to things that are compatible with U.S. objectives and U.S. law” rather than “promoting this settlement construction.” And Elizabeth Warren, in a videotaped message, said that America must find “ways to apply pressure and create consequences for problematic behavior.”

Using American aid as a lever to change Israeli policy has become a mainstream Democratic position almost overnight. To understand how dramatic that is, it’s worth revisiting recent history.

In 2016, Barack Obama agreed to give Israel $38 billion in military aid over 10 years — a significant increase over the previous 10-year-deal, which totaled $30 billion — without asking Prime Minister Benjamin Netanyahu to change Israeli policy towards the Palestinians in any way. He did so even though Netanyahu had publicly rejected Obama’s call for a Palestinian state near the 1967 lines, blasted Obama’s nuclear deal with Iran before a joint session of Congress and funded a massive expansion of settlement growth.

The Democratic nominee to replace Obama that year, Hillary Clinton, suggested that Obama had nonetheless not been conciliatory enough to Netanyahu. In her 2014 book, Hard Choices, she argued that it was necessary to connect with the Israeli leader “as a friend” rather than making him feel “cornered.” In 2015, she pledged to invite him to the White House in her first month in office. As president, she told AIPAC in 2016, she would “vigorously oppose any attempt by outside parties to impose a solution, including by the U.N. Security Council.”

Partly, that’s because the millennials who are pushing the party left on domestic issues are also further left than their elders when it comes to Israel. Partly, it’s because Netanyahu has eviscerated the old AIPAC argument that the best way to create a Palestinian state is for America to support Israel unconditionally. In fact, the more unconditional America’s support has grown in the Trump era, the more racist and authoritarian and devoted to permanent occupation of the West Bank Netanyahu seems to become. (Netanyahu’s potential successor, Benny Gantz, hasn’t said he supports a Palestinian state either).

But another factor in the shift is Bernie Sanders, who — without much media fanfare — has spent the Trump era quietly violating taboo after taboo when it comes to the American debate about Israel.

In 2017, Senator Sanders publicly discussed the Palestinian perspective on what happened in 1948. (“Like our own country, the founding of Israel involved the displacement of hundreds of thousands of people already living there, the Palestinian people. Over 700,000 people were made refugees.”) Last year he used his social-media platform to give people in Gaza a chance to describe what it’s like to live under a blockade. And for two years now he has publicly supported conditioning American military aid.

Liberated by his small-donor base from the orthodoxies of large Democratic contributors, Sanders has smashed the ideological barriers that constrained the Clinton-Obama Democratic Party on Israel much as he has on other issues. And, in so doing, he has revealed that policies that were once deemed unthinkable enjoy substantial support.

I’d never seen a poll on conditioning military aid until Sanders began speaking about it. But this spring, the University of Maryland discovered that 57% of Democrats support “economic sanctions” or “something harsher” in response to settlement growth. A Center for American Progress poll released this month shows that 71% of Democrats — and 56% of Americans overall — believe Washington “should not provide unrestricted financial and military assistance” to Israel.

By exposing the popularity of restrictions on American aid, Sanders has pressured his rivals to move in his direction. He’s allowed Warren and Buttigieg — who have been vaguer and more cautious in their embrace of aid restrictions — to look like relative moderates while taking positions that are still radical compared to Obama’s or Clinton’s. And he’s begun a discussion, still in its infancy, that will lead more mainstream journalists to investigate how American military aid to Israel actually works.

What they find will likely shift opinion even further. When Americans learn that Israel — uniquely among recipients of U.S. aid — can spend roughly 25% of the money it gets on Israeli weapons rather those those made in America, thus subsidizing an arms industry that competes with our own, even some Trump supporters will cry foul.

What this year’s J Street conference made clear is that when it comes to Israel, there are now two Democratic Parties. There is a faction, powered by young and progressive activists, which sees Netanyahu as Trump, AIPAC as the NRA, and the occupation as a moral obscenity subsidized by American money. And there is a faction, led by politicians with deep roots in Washington and close ties to the American Jewish establishment, who are still giving the same Israel speeches they gave before J Street was born.

In twin 10-minute addresses at J Street’s 1,200-person gala on Monday night, Sen. Chuck Schumer never mentioned the word Palestinian and House Speaker Nancy Pelosi said it exactly once (endorsing “a two state solution that enhances stability and security for Israel and the Palestinian people”). In his video message to the Conference, former Vice President Joe Biden offered no hint that he would contemplate restrictions or conditions on American aid.

If a progressive like Warren wins the White House in 2020, she will likely face a battle over military aid not only with Republicans but with powerful figures in her own party’s old guard. But that struggle itself will represent a momentous change.

Almost overnight, a debate that many thought impossible has broken out inside in the Democratic Party. What I heard at J Street was the sound of progressive Democrats losing their fear.

Peter Beinart is a Forward columnist and professor of journalism and political science at the City University of New York. He is also a contributor to The Atlantic and a CNN commentator. Follow him on Twitter @PeterBeinart.