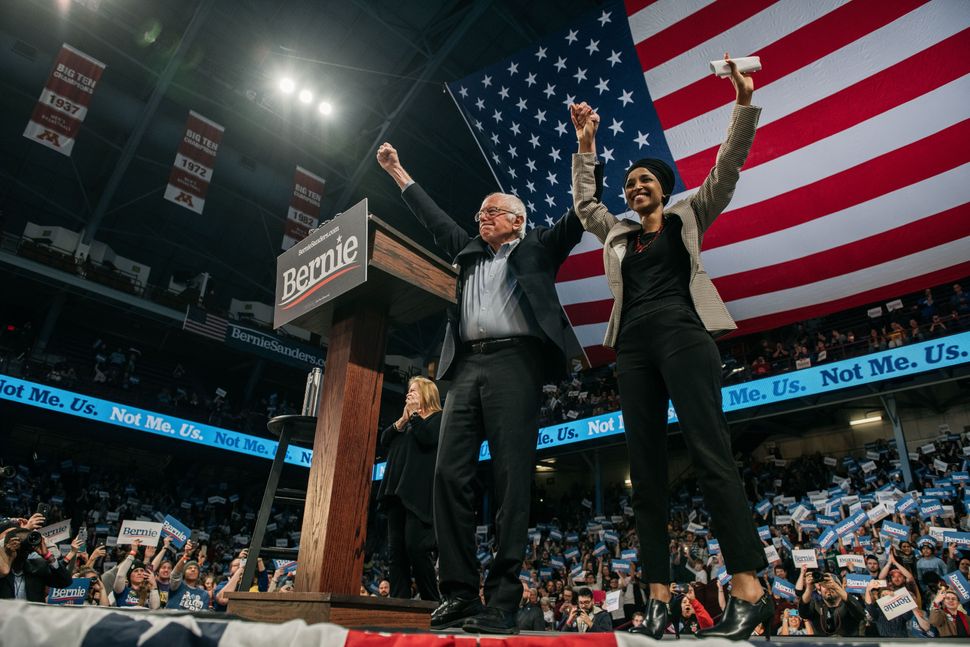 In early October, Bernie Sanders’ presidential campaign was on the ropes. The 78-year-old senator from Vermont experienced chest pain and was rushed to the hospital. Later, he would admit that doctors diagnosed him with a myocardial infarction, better known as a heart attack. It was just two weeks before the third Democratic Primary Debate.

While questions swirled around his fitness to run for the highest office in the land, Sanders got a much needed boost in the form of rolling endorsements from three of the four members of the so-called “Squad” – a group of young freshmen congresswomen of color. Sanders secured endorsements from Congresswomen Alexandria Ocasio-Cortez of New York, Ilhan Omar of Minnesota, and Rashida Tlaib of Michigan.

“For me, it wasn’t even about helping the senator. It was a moment of clarity for me personally in saying, What role do I want to play?” Ocasio-Cortez told NBC. “And I want to be a part of a mass movement.”

In the immediate wake of their endorsement announcements, it became clear that Sanders was not ready to step down from his campaign, nor from the movement he’s built and led.

“To put it bluntly, I am back,” Sanders said, accepting Ocasio-Cortez’s endorsement.

And Ocasio-Cortez’s endorsement makes sense. She worked as an organizer for Sanders’ 2016 campaign, and her district gave the Vermont Senator more than 41% of their votes. She herself was able to secure her seat with the help of the Justice Democrats, a progressive political action committee formed by leaders of Sanders’ 2016 campaign.

But Tlaib and Omar’s endorsements are less obvious, and have left some wondering why they would throw their support behind Sanders.

For one, Omar and Tlaib have repeatedly offended the Jewish community, making comments that many, including members of their own party, perceive to be anti-Semitic. Omar complained that Israel “hypnotized the world,” and cast American support for Israel as “all about the Benjamins,” evoking anti-Semitic stereotypes about Jews and money. And while she apologized for those comments, she did not apologize for a subsequent one about “the political influence in this country that says it is okay to push for allegiance to a foreign country,” which evoked an anti-Semitic dual loyalties trope.

Tlaib, too, has run afoul of the Jewish community with comments suggestive of accusations of dual loyalties, and with an alternative history of the role Palestinians played in the Holocaust.

Additionally, Tlaib has been openly supportive of a one-state solution, which proposes the end of the Jewish state. And though Omar supports a two-state solution, both Tlaib and Omar support the Boycott, Divestment, and Sanctions movement, a campaign viewed by many as anti-Semitic in that it seeks to delegitimize the state of Israel.

Sanders, on the other hand, is Jewish, supports a two-state solution between Israel and Palestine, and doesn’t support BDS.

While I do not support the BDS movement, we must defend every American’s constitutional right to peacefully engage in political activity. It is clear to me that S.1 would violate Americans’ First Amendment rights.

So how did these divergent positions coalesce into an endorsement?

The most cynical reading is that Sanders provides cover for Omar and Tlaib from further allegations of anti-Semitism. It’s the “some of my best friends are Jewish” defense. The same logic can be applied to explain Sanders’ support from Linda Sarsour, a Sanders surrogate who has supported the senator since 2016. Sarsour shares Omar and Tlaib’s views on Israel, but has gone a step further in alienating the Jewish community by associating herself with raging anti-Semite Louis Farrakhan, the Nation of Islam leader who likens Jews to “termites.”

No doubt it’s useful to have a Jew one can call upon to defend one against allegations of anti-Semitism.

But there’s another, stronger reason that these women are flocking to Sanders: socialism.

While Sanders has attempted to make himself more palatable to the mainstream by marketing himself as a “Democratic Socialist,” both his supporters and critics understand he’s a socialist who favors redistributive policies. And since the 2016 Democratic presidential primary, Sanders’ influence has only grown within the party, to the point where center-left Democrats running for president in 2020 are embracing Sanders’ policies like Medicare for All and tuition-free college.

When it comes to the relationship that Omar and Tlaib have with Sanders, it’s this economic agenda which is paramount; anti-Semitism and Israel are in the backseat.

Barring a surprise victory in 2020, this is likely the last time Sanders will run for president. By 2024 (or possibly 2028), the Overton window will likely shift further to the left in the Democratic Party. Who will be remembered for sticking with Bernie’s revolution should his ideas remain popular in the next five to ten years? For progressives, it’s a crucial association.

And Sanders seems to have concluded that his association with Omar and Tlaib would not hurt him politically, despite the Jewish community’s objections. With their help and that of Ocasio-Cortez, support from The Squad will ensure that his legacy lives on through them.

Siraj Hashmi is a commentary video editor and writer for the Washington Examiner. He previously served as assisting editor for Red Alert Politics and was an associate producer at SiriusXM Radio. You can find him on Twitter @SirajAHashmi.