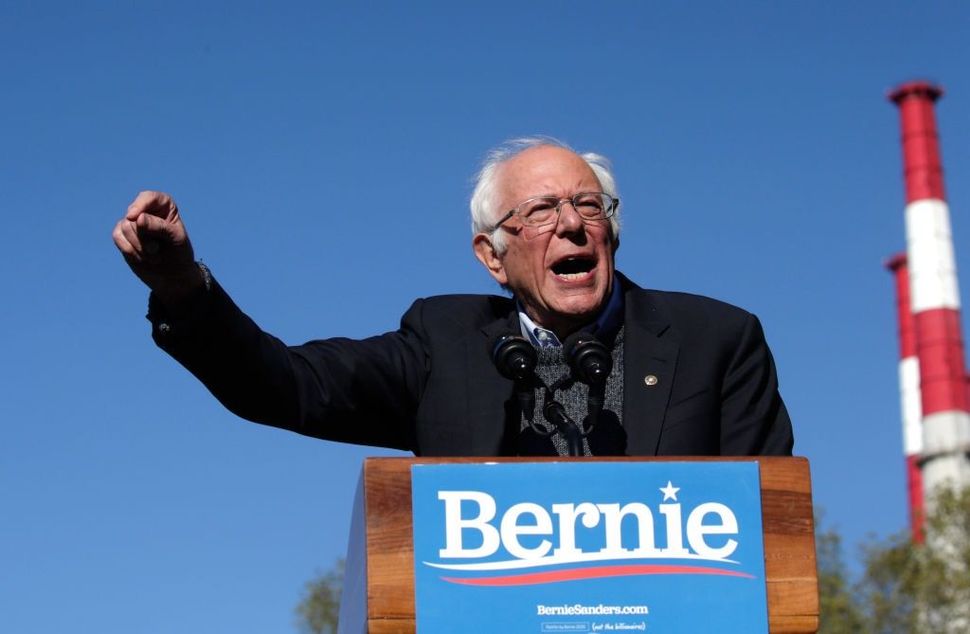 I have no idea what my parents, both lifelong liberal Democrats, would have made of the current unwieldy crop of presidential candidates. But about my maternal grandfather, Max Blustein, I have no doubt. I’m certain my Zeyde, who died in 1969 when I was in college, would have been unwavering in support of Bernie Sanders, as am I. My Zeyde and I would have bonded over shots of schnapps, applauding Sanders’ brand of democratic socialism and commiserating with his righteous anger.

Five feet two inches, generous with hugs and kisses, Max retired in 1955 after forty years in the laundry business, a zealous lifetime member of the Amalgamated Clothing Workers of America. Immensely proud of his American citizenship, gained in 1917, neither he nor my grandmother, Anna, ever missed an election. They lived on Social Security and a small union pension in a three-room apartment in Rego Park, Queens, that always smelled of chicken soup and fresh-baked knishes. 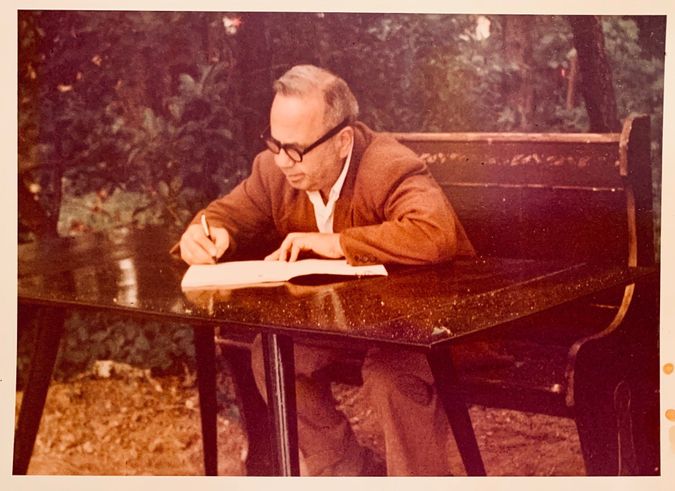 Max Blustein at his desk. Image by Courtesy of the Author

Zeyde, as my siblings, cousins and I called him, rose at 5 o’clock every morning and headed out to buy the daily Forverts, even while visiting us on Long Island, walking a mile each way to find it. Then he would sit down and fire off opinionated letters to public officials and journalists, printing laboriously in all caps.

He wrote repeatedly to President Johnson, imploring him to pass national health care for seniors. A typical letter of February 1964 made all Sanders’ essential points about Medicare for All. First, Max warmed up the President by pointing out what they had in common (“You have two daughters and I have two daughters, you had a heart attack and I had a heart attack…”). Then he got down to his plea: “I worked hard all my life but couldn’t save a dollar… We get along, if not for those darn sicknesses that come to old people. Every time something else, and the doctors and druggists have no pity. We are not asking for charity, but isn’t the United States rich enough to take care of its own citizens?”

Bernie Sanders’ straightforward, forceful language would have appealed to a man born in a house with a dirt floor somewhere near Kiev, who came to New York in 1909 at age 19.

When Bernie, talking about his proposed wealth tax on the Stephen Colbert show in September, said billionaires had “more wealth than they could spend in a thousand lifetimes,” I could hear my grandfather shouting, “You got it, mister!”

Whenever Sanders says the Democratic party “has gotta have the guts” to stand up to the healthcare industry, there is my Zeyde saying, “Dat’s right, vun hundred percent!” 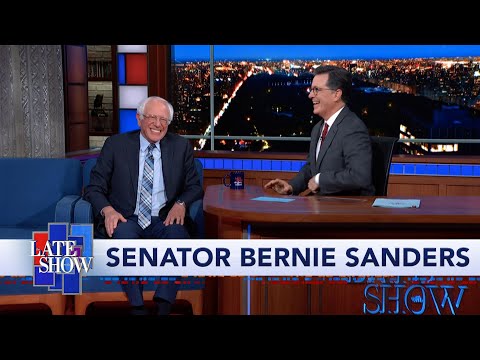 My grandfather spoke only rudimentary English until, in his 60s, he finally had time to attend free night classes at a local public school. That’s when he learned to write, playing with his adopted language, rhyming and punning, composing topical verses he read out loud at his Golden Age Club:

I live on Social Security

I don’t bother anybody for a cent

At the end of the month I am not broke

There wasn’t a federal program my grandfather didn’t like. He would have been a fervent advocate for Medicare for All, a living wage, free public college tuition, taxing extreme wealth, racial and environmental justice — every bit of Sanders’ platform.

Bernie would have loved Max, too, for his boots-on-the-ground activism. As my grandfather wrote to Robert Morgenthau during the Manhattan DA’s 1962 gubernatorial campaign against Nelson Rockefeller, “Let me give out circulars in the unions and old age clubs or even on the streets. We have three million retirees in New York State and that is a lot of votes.”

Also like Sanders, Max was a caring individual with non-sectarian values. His Jewishness was important; he and my grandmother were deeply faithful and couldn’t have lived any other way. They observed Shabbos and conducted long, serious Seders.

But through his union, club and other activities, Max had dear friends of different races and religions, including a few nuns. Among his papers is a feature article from a 1966 issue of the Catholic magazine Sign, about his affectionate relationship with Joseph, an African-American toddler from the New York Foundling Hospital, whom Max took care of several afternoons a week as part of the federally-funded Foster Grandparents program. There, in half a dozen photos, is Max pushing the two-year-old in a swing, in a stroller, dispensing hugs, blowing out birthday candles. He was as devoted to Joseph as the child was to him.

Political leanings have no basis in genetics; that much is clear in the rifts that have splintered American families in recent times. Yet in early 2016, as that primary season was heating up, I sat in a Philadelphia coffee shop with my grown daughter, Zoë, and my son, named Max after his great-grandfather, and asked, “So, who are you supporting?”

They answered practically in unison: “Bernie!”

Now, with multiple candidates in the race, their answer is still the same.

A few weekends ago, my daughter and I trekked to the gargantuan “Bernie’s Back” rally in Queens. It seemed an inflection point, with a youthful audience passionate about justice and equality and ready to take up the old banners, led by a septuagenarian with a voice from my Zeyde’s world.

If he’d heard that roaring crowd, Zeyde would have been beside himself with joy.

Cara Greenberg is a writer based in Brooklyn.