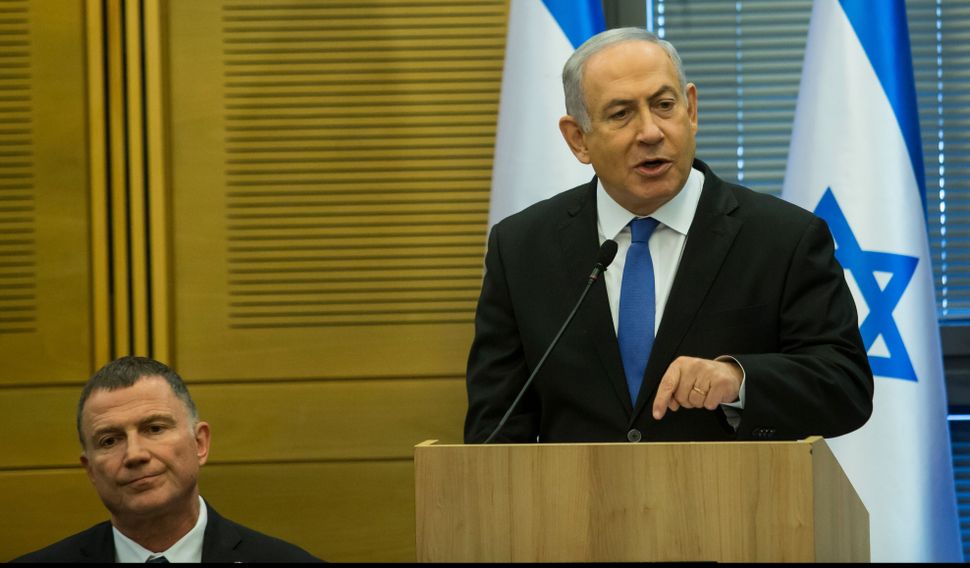 When Israel’s Attorney General Avichai Mandelblit announced on Thursday that he would indict Prime Minister Benjamin Netanyahu on three separate corruption charges, Netanyahu knew just what to say. He called a press conference in advance, for precisely one hour after the first announcement began.

Glaring at the cameras, he practically guffawed at points to swallow his emotion as he told Israelis, “They’re spilling my blood, and that of my wife and my son.”

He felt “helpless” in the face of horrible wrongs that have been done to him.

Is this the same Netanyahu whose entire political persona rests on being the strongman of Israel? He is King Bibi, Mr. Security or the master, the only one capable of taming the circus of Israeli politics. The slogan of his political campaign in 2019 had neither subtlety nor syntax: “Gantz, Left, Weak. Netanyahu, Right, Strong.” Now, just months later, his voice was quivering. Is Netanyahu finally facing defeat?

A longer and closer look shows just the opposite. These are practiced words, words in which the well-honed victimization have served a clear purpose over the years. In February, when Attorney General Avichai Mandelblit announced his intention to indict him pending a hearing, the headlines were uncannily similar: “Netanyahu chokes up: They’re spilling my blood and the blood of my family.” In October, he wrote on Facebook that “they are spilling the blood of my wife Sarah.” In 2015, Sarah Netanyahu told a court the same thing – “they’re spilling my blood,” in response to a lawsuit against her by employees of the official residence.

Netanyahu’s injured look is anchored by his self-sacrifice. His Thursday speech began, like many of his speeches, with the recitation of a litany of his sacrifices for the country. He repeated the sacrifice theme later in the speech, hitching his selfless devotion to Israel’s great success. He alone has made Israel “flourish.” He has earned Israel its rightful place of honor on the global stage.

But now, he thundered, the country stands to lose it all. Israel is facing a disease that threatens to destroy his leadership, which has brought such plentiful fruit to the people.

The disease is the Israeli legal system, and it targets him alone.

In the 1990s, Netanyahu famously attacked the left and the media, and it served his populist political rise well. In 2019, the enemy is the law itself.

In Israel Hayom, the freebie pro-Netanyahu newspaper bankrolled by Sheldon Adelson, not a day goes by without an embittered article slamming the State Prosecutor, the Supreme Court (in general), or the police, accusing them of a political plot or sarcastically deriding the complete illegitimacy of the investigations. These articles barely need to argue that the investigations were politically motivated; more often than not, that is the starting point; all the rest is commentary.

Netanyahu did not personally spark the wave of hostility in Israel against the judiciary, which has complex roots. But it accelerated heavily on his watch and with his encouragement. And over the last year, Netanyahu has plunged in, railing at each legal development.

His greatest rage is trained on the twin evils of the state prosecutor’s office and the police, which filled up much of his response on Thursday. These dark forces, in a vague collusion with the left and the media, were sworn to tearing him down from the start, per Netanyahu. They fabricated File #4000, the most severe case in which he is being charged with bribery. He accused the authorities of selective enforcement, called the process “polluted” perhaps a dozen times, charged investigators with blackmailing witnesses to lie and incriminate him and called the whole thing an attempted coup.

He concluded with a demand that is sure to become the next rallying cry for his supporters: “Investigate the investigators.” To do that, Netanyahu planted the idea that the state must establish an independent commission — essentially, a shadow law enforcement system to replace the sick one that has betrayed the people. By implication, this alone can restore Israel to its rightful strength.

The cumulative effect has been a deep blow to the judiciary as a whole. As Netanyahu rightly pointed out, the public is rapidly losing trust in the law: a recent poll showed that only a minority of Israelis express high levels of trust in the Supreme Court (44%), the court system (38%), the state prosecutor (28%), or the police (22%).

Netanyahu cited this trend as evidence that the public is disgusted by the ruthless political agenda of the investigations. For his stalwart supporters, it has worked. He won 26% of the vote in both elections of 2019. In a Channel 12 survey conducted just hours before Thursday’s announcement of indictment, 30% said he should continue serving as Prime Minister if indicted. For the base, victimization is his immunization.

But there’s another reading: Netanyahu has projected his sins of corruption onto the legal system itself to deflect and delegitimize the proceedings against him.

Either way, the slow drama of institutional collapse is happening under Netanyahu’s leadership. In his frenzy to sell the “strong” Israel, he has eroded the political culture to the point of non-recognition.

Netanyahu may be one step closer to his political end or even to jail; the country will have to pick up the pieces after he’s gone.

Dahlia Scheindlin is a public opinion expert and political analyst. She is a policy fellow with the Mitvim Institute and The Century Foundation, and a regular writer for +972 Magazine. She conducted polling and advising for Meretz/Democratic Union at an early stage of the current campaign.