Our Orthodox Family Was Attacked On A Train. A Brave Muslim Woman Intervened. 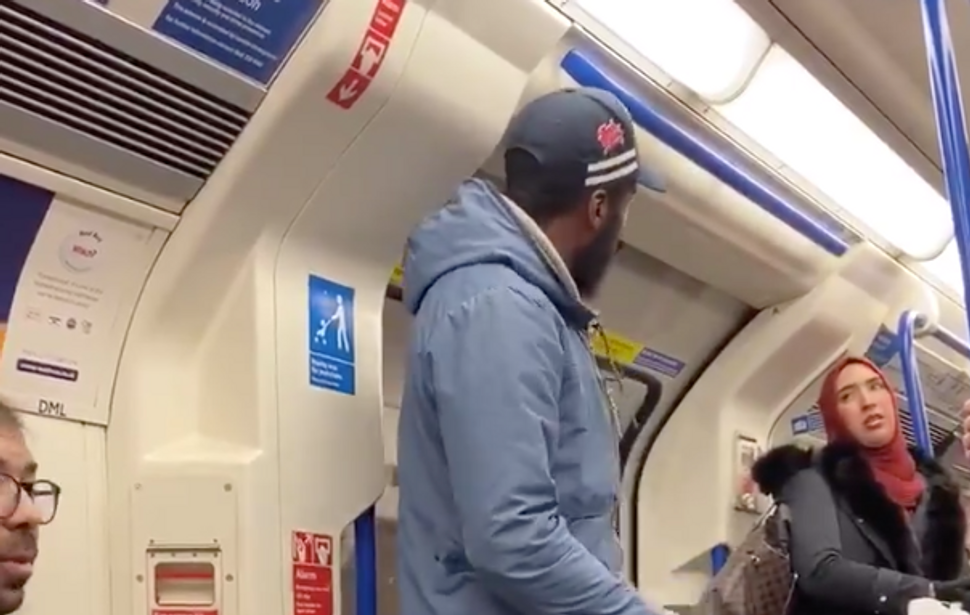 The author of this piece was filmed while he and his children were attacked on a train in London. The Forward normally identifies all of our op-ed writers, but the father expressed a fear of retaliation for speaking out, and has asked to remain anonymous. We have honored his request.

To many of you, the disturbing viral video of an anti-Semite ranting at a Jewish family on the underground is just that, a video. To our family, this video, which captured just two minutes of a far longer ordeal, is a stark record of the incredibly frightening experience we went through that day. I want to share a first hand account to let the world know what minorities experience on a daily basis and a message of hope.

On the morning of Friday 22nd November, my pregnant wife, our three young children, and I were on the Tube traveling from Hendon Central to Covent Gardens. We were engaged in regular family chatter. At some point, a man boarded the train and approached us. In an aggressive tone, he asked if we were Jews, though it was obvious that he knew we were Jewish since we were wearing our highly noticeable religious skullcaps. He immediately began to shout at us that Jews started the slave trade and that our family would in turn be his slaves. Along with many other vile threats, he said the Jews were from the synagogue of Satan, and were responsible for planning and perpetrating various tragedies and atrocities, such as 9/11. His comments sounded like they were taken directly from the Protocols of The Elders of Zion.

Around noon I witnessed appalling anti Semitic abuse towards this Jewish Family on the northern line. Fair play to other passengers who stood up to him. If you recognise the guy please report to ⁦@metpoliceuk⁩ pic.twitter.com/YxzwAnDqTJ

Unfortunately, as a noticeably Jewish person, it’s not uncommon to have anti-Semitic abuse hurled at me. But those encounters usually take place in open spaces, and are done in passing. It is another matter entirely to be locked in the confined space of a train carriage, with nowhere to run or hide.

As you can tell from the video, we were all scared. My only thoughts were how to keep our children calm, shield and protect them, and somehow deescalate the situation.

At this point, a man wearing a baseball cap bravely tried to intervene, becoming himself the subject of the man’s threats. Then, a Muslim woman wearing a headscarf, who we now know as Asma Shuweikh, stepped in. This was an even more courageous act, since the man had already shown a willingness to resort to, at the very least, violent threats. He then directed his ire at Asma for stepping in.

Without her intervention and distraction, he would have continued his abuse towards us, which we are certain would have escalated to physical violence. Asma’s actions were nothing short of heroic. Others then offered assistance by switching seats and talking to our children.

The ordeal finally ended for us when we left the train. We are extremely grateful to all who stepped forward in this charged situation.

Experiencing anti-Semitism even these days is unfortunately not as rare as reported sightings of the Loch Ness monster. And sadly, for most of these incidents, there are no cellphones ready to record and post the events to social media to raise awareness.

Anti-Semitism is on the rise, ranging from everyday verbal abuse to ever more frequent physical attacks to the vast varieties of anti-Jewish sentiment all over. But it often flies below the radar, or is willfully ignored.

I want to use the opportunity of the virality of this incident to highlight two things. First, it should serve as a reminder to everyone that ant-Semitism is alive and well. The scene of a Jewish family at the receiving end of abuse like the one you saw of my family is not an outlier. It is a reality that Jews worldwide live with every day. It is important that we not delude ourselves that the liberal democracies we live in have stamped out this ancient specter of evil that has haunted Europe and the world for thousands of years.

But mainly, while this incident was a grim reminder of bigotry, it also serves as a beacon of hope. The assistance we received was heartwarming. A few people came to our aid, but I want to specifically mention Asma. Asma shattered the mistaken belief that Jews and Muslims must be at odds by standing up to our abuser, putting herself in harm’s way to assist us. In so doing, Asma insisted on our shared humanity; no matter what we look like on the outside, on the inside we are all the same.

Asma’s actions stand as a direct rebuke to the vision of racial hatred and division presented not only by the man on the train, but by many in our society.

I’m indebted to Asma, both for helping us and for serving as an example to the world about how, despite our differences, through kindness and understanding, we can live together in peace and harmony.

Our Orthodox Family Was Attacked On A Train. A Brave Muslim Woman Intervened.