What Israel Can Learn From The Hasmoneans 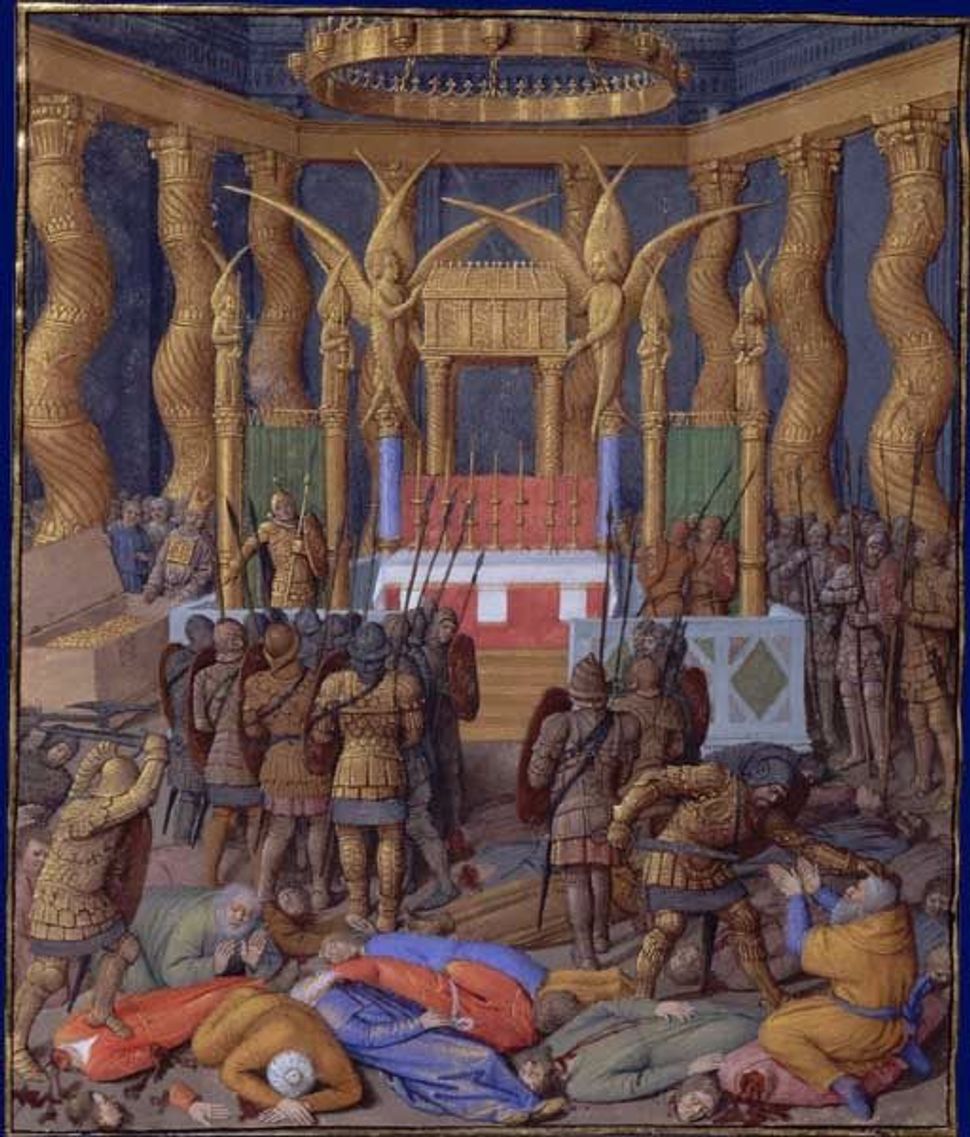 Stop me if you’ve heard this one: Israel is locked in conflict over how to treat non-Jewish people living in the land. Stark divisions are growing between radically different visions of what being Jewish means. Tensions are rising as lines blur between religious and civil authority. And the nation’s relationship with the world’s dominant superpower grows both closer and more fraught.

I’m referring to the Jewish people’s most recent previous experience with statehood before the modern State of Israel: the Hasmonean Kingdom, created in the 160s BCE after the Maccabean revolt, and ending in 63 BCE when Pompey the Great converted Judea into a Roman province.

Mark Twain never actually said this, but nonetheless it’s true: “History doesn’t repeat itself, but it rhymes.” If you look at the history of the Hasmonean Dynasty, you’ll see obvious similarities between then and now — similar structural problems that have Israel faced in both eras. As a people that prides itself on learning from out past, we need to ask the question: Given that the structural issues are so similar, are we repeating the same mistakes of the Hasmoneans, or are we learning from them?

To confront its problems, the Hasmoneans made four shortsighted and disastrous decisions that led to the loss of Jewish independence for two millennia:

Like today, the Land of Israel during Hasmonean times had significant non-Jewish populations. At the beginning of the dynasty, Simon Maccabee drew his borders to keep the realm mostly homogeneous, but later, the Hasmonean state expanded to include large populations of Samaritans, Idumeans, Itureans, Nabateans, Greeks, Arameans, Phoenicians, and others.

Two Hasmonean Kings, John Hyrcanus and Alexander Jannaeus, enacted policies regarding those “occupied” peoples that had disastrous consequences. Hyrcanus conquered and annexed Idumea. In those days, annexation was not just political but religious. For the first and only time in Jewish history, a foreign people was forced to convert to Judaism “en masse.”

This proved disastrous. The Idumeans — and other “annexed” peoples, like the city states of Gaza, Ashkelon and Akko — became a perennial “fifth column” inside the Jewish State. The stupidity of annexation became painfully evident when a certain grandson of Antipater, the Idumean chieftain converted by Hyrcanus, seized the crown. He was Herod the Great, an infamously brutal tyrant.

Jews will be Jews. Like today, in Hasmonean times, the Jewish People was diverse and divided between opposing factions: Sadducees, Pharisees, Essenes, and others. Both Hyrcanus and Jannaeus served as high priests and naturally sided with the Sadducees, who represented the Temple priesthood and were deeply entrenched in the political system. Hyrcanus exiled some Pharisaic rabbis and Jannaeus slaughtered thousands of them outright.

Non-Sadducees found it easier to practice their Judaism in the Diaspora than in the land of Israel; for example, Yehoshua Ben Perahia, one of the Sanhedrin’s leaders, was persecuted in Israel but lived freely in Alexandria.

The Hasmonean mistake of refusing to accommodate Jewish diversity deepened divides in the Jewish People and led eventually to two bloody civil wars that weakened the state from within.

Destroying the separation of powers

The first Hasmonean ruler, Simon Maccabee, respected a few cardinal rules of Judaism’s “separation of powers.” Being a kohen, he was appointed High Priest, but he refused to be anointed king as well. Instead, he opted to use the Hebrew term “nasi,” “ethnarch” in Greek, and presented his position (at least theoretically) as being temporary and contingent on the people’s acceptance.

A Jewish king, he knew, could only be from the House of David and could not serve simultaneously as High Priest; there had to be a separation between religious and civil power. Simon also ruled with the consent and guidance of a council of elders or gerusia, which was later called Sanhedrin. Although it wasn’t a separation of powers in the modern sense, Simon’s power was far from absolute. He didn’t have judicial power, as the Sanhedrin served as a higher court, and the concentration of religious and secular power was supposed to be temporary.

His descendants, however, eliminated whatever separation of powers existed. Hyrcanus was still too squeamish to call himself melekh (king), so he started slowly. On bilingual coins of the time, the Hebrew side still calls him “nasi,” but the Greek side says not “ethnarch” but “basileos” (king).

He tolerated an independent Sanhedrin for some time, but he ultimately exiled some of its leaders. Jannaeus, his successor, was emboldened; he called himself king both in Hebrew and Greek, and retained the position of High Priest. He also packed the Sanhedrin with his acolytes and established the practice of overriding any judgement of the Sanhedrin that he didn’t like.

Having no separation of powers, Jannaeus became a despot. By the sixth year of his reign, he was killing opponents and the most brilliant sages were leaving the country by the thousands in the first Jewish “brain drain.” Like with most tyrants, the state disintegrated after his death; a civil war ensued and that marked the beginning of the end of Jewish independence.

Depending on One Superpower

While the Maccabees fought the Seleucid Empire, a much larger player was becoming the only superpower of the Mediterranean: Rome. Rome had subtly supported the Maccabees’ Revolt. Judah Maccabee made a treaty with the Roman Senate and later the relations between the allies became even closer. Rome protected the Hasmonean State; the Seleucids knew that it was better not to mess with an ally of Rome and had no choice but to tolerate Judean territorial expansion.

That was good diplomacy by the Hasmoneans — but dangerous, too. The Hasmoneans put “all their eggs in one basket” by relying on Rome alone. A much better policy would have been to work out a multi-party alliance including other powerful actors, like the powerful Parthian Empire, which could have counterbalanced the power of Rome.

Rome eventually turned on the Jews, and we know how that ended. Depending exclusively on capricious, egocentric, and whimsical emperors is rarely a good idea.

While no two historical epochs are the same, the four structural issues that conditioned the Hasmonean State are absolutely relevant today. Will modern Israel learn from this historical precedent, or will she make the same mistakes that the Hasmoneans did?

Let’s examine each of them separately.

The idea of annexing the West Bank, which used to be fringe, is gaining momentum; in fact, Prime Minister Netanyahu has already promised partial annexation if he gets the opportunity.

The need to control strategic territory, now as in Hasmonean times, is understandably seen as necessary for the state’s security. But the dangers of annexation now are even greater than when Hyrcanus annexed Idumea. As every sane analyst knows, annexing the territories means absorbing over five million Arabs, who will join the 1.5 million Israeli Arabs in jeopardizing the Jewish majority of the state.

Following the Hasmoneans, the government of Israel officially favors one particular stream of Judaism, while other streams are spurned today as they were 2,000 years ago by Hyrcanus and Jannaeus. True, thank God, the Reform Jews today are not being killed like the Pharisees of yore, but they are denied rights and equality under the law.

Will discrimination against the non-Orthodox in Israel reach a tipping point after which vast segments of the Jewish People will cease to see the Jewish state as the home of all Jews? Or will a new pluralist paradigm be enacted?

Destroying the separation of powers

Israel today is a model of democratic institutions — especially regarding the independence of its judiciary and legal system. Just last month, we saw an independent attorney general indict a serving prime minister. But two major proposed changes have gained currency this year: One proposal would grant immunity from prosecution to the prime minister, which means, de facto, that he is above the law. The second is the infamous “override law,” which allows a simple majority of Knesset members to override any High Court decision.

In Israel, there’s already no separation between legislative and executive power, because the government is formed by the Knesset and the cabinet is comprised of Knesset members. Under this change, the ruling coalition would have absolute power — legislative, judicial, and executive. Will separation of powers hold or are we moving towards a concentration of power like the one that existed during Jannaeus’s time?

Depending on One Superpower

Today, Israel is close to relying exclusively on America. Meanwhile, American support is a blessing for Israel, but isn’t modern Israel making the same mistake the Hasmoneans made with Rome? One might have thought a few years ago that America doesn’t turn on allies, but is that still true?

Regardless of what you may think of the current trajectory of the U.S., no country can dominate the globe forever. China is rapidly rising. Russia is expanding its influence. Meanwhile, Israel’s over-reliance on America alienates other potential allies and partners.

Stop me if you’ve heard this one before: After many generations of Jewish suffering under foreign rule, a long-shot freedom movement creates a miraculous revival of Jewish sovereignty in the Land of Israel — only to squander the dream they had built, allowing their independence to devolve into self-destructive annexation of others, needless internal division, concentration and corruption of power, and reliance on a single foreign benefactor. The miracle ends in catastrophe, and becomes a short–lived, failed experiment.

That describes the Hasmoneans. It doesn’t describe Israel today.

But Israel is at an inflection point, a critical juncture regarding the same four dilemmas that the Hasmoneans faced. Decisions being made today, this year, this month, this very week, will determine whether we make the same mistakes they made or whether we will learn from their failed experience.

There are many things that we can’t control, and historical periods don’t compare perfectly. But when history so clearly offers us the gift of hindsight, we should pay attention.

Andrés Spokoiny is president and CEO of Jewish Funders Network, which works with Jewish funders, both individually and collectively, to improve and maximize their philanthropic impact.

What Israel Can Learn From The Hasmoneans