Yasher Coach, Elissa Slotkin. Your Honorable Service Made Me Proud To Be Your Constituent. 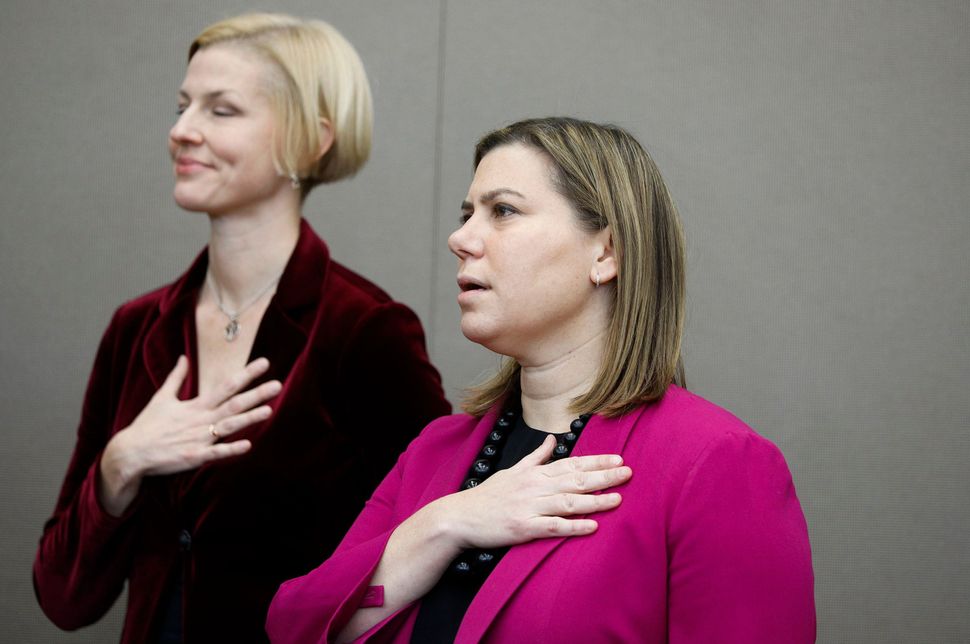 On September 23, a week before the High Holidays, my congresswoman, Elissa Slotkin of Michigan, joined seven other national security Democrats in declaring their support of an impeachment inquiry in President Donald Trump. A week later, when she arrived for Erev Rosh Hashanah services at one of our Metro Detroit synagogues, she was met with rapturous applause from a community known for its political conservatism. On the eve of the Jewish New Year, Congresswoman Slotkin’s community stood with her and gave her strength. On the eve of the secular New Year, as she prepares for re-election, I once again say to Congresswoman Elissa Slotkin “Yasher Koach.”

In this tumultuous moment in our nation’s political life and in our Jewish community, I think often about that Hebrew expression, “Yasher Koach,” “may you have strength.” In the Jewish community, we use these words to exhort our fellow Jews to stay strong as they seek to meet life’s challenges, and to acknowledge them when they do. These words are especially relevant in acknowledging the eminent strength and courage of Congresswoman Slotkin. A former CIA officer and high-ranking Pentagon official, Rep. Slotkin beat a longtime Republican incumbent in a moderate district spanning Michigan’s state capital and Detroit’s northernmost exurbs in last year’s midterm elections. In so doing, so was part of a blue wave that gave the Democrats the majority they needed to impeach the president.

On Monday, I watched as Rep. Slotkin explained to an overflowing crowd of her mid-Michigan constituents — almost evenly split between supporters and detractors — her difficult decision to support articles of impeachment of the President of the United States.

The atmosphere in the room seemed to distill the state of our country’s polarized politics. Many cheered and clapped for our congresswoman. Many shouted at her. Many called her names. Some accused her of treason. Throughout it all, she spoke calmly, pointedly, and cogently about the rigorous process she followed — inspired by her CIA training — that allowed her to make the decision to stand up for American democracy and the rule of law, and fulfill her oath to the Constitution.

Earlier today, Rep. Elissa Slotkin of Michigan faced a mixed reaction as she explained to her constituents at a town hall that she planned on voting to impeach President Trump pic.twitter.com/RetaVz8mlA

I was not alone in being deeply moved by her courage, doubly affecting given that Rep. Slotkin did not run for Congress to impeach a president; she ran to increase access to health care, ensure clean drinking water, and defend our national security.

In a Detroit Free Press article explaining her controversial decision, Rep. Slotkin wrote, “Over the past few months, I’ve been told more times than I can count that the vote I’ll be casting this week will mark the end of my short political career. That may be. But… there are some decisions in life that have to be made based on what you know in your bones is right. And this is one of those times.”

Reading those words on Monday morning, I felt a wave of emotion wash over me. There could not be a more stark contrast between leaders like Elissa Slotkin, who defend our democracy without consideration for their personal or political concerns, and those like Donald Trump, who pursue their own personal interests no matter the heavy casualties for our democracy.

I have gotten to know Congresswoman Slotkin over the past year, both as a constituent, and as founder and chair of the Michigan Democratic Jewish Caucus. She is a wickedly funny, cerebral, and deeply serious leader whose concern for those she represents is matched only by the strategic savvy with which she approaches her job.

Several times she has taken the time to talk with me about issues important to Michigan’s Jewish community, such as combating anti-Semitism and strengthening the U.S.-Israel defense partnership — issues about which she has been on the forefront in the 116th Congress. But Rep. Slotkin will always be first and foremost a resident of Michigan’s 8th district. And it’s in that capacity that she has fought for me.

In acknowledging her courage in voting her conscience, I will work tooth-and-nail to galvanize my community to fight for every vote in Michigan’s 8th district. We will go door-to-door, we will call voters, and we will fundraise — because Elissa Slotkin represents the best of who we are as a community, a state, and a country. And we need leaders like Rep. Slotkin to lead our country out of its current darkness — now more than ever.

In a conventional Jewish family of doctors and businesspeople, I am often asked how I could ever want to work in politics, when the entire business is “so corrupt” and “everyone lies.”

Noah Arbit is founder and chair of the Michigan Democratic Jewish Caucus.

Yasher Coach, Elissa Slotkin. Your Honorable Service Made Me Proud To Be Your Constituent.