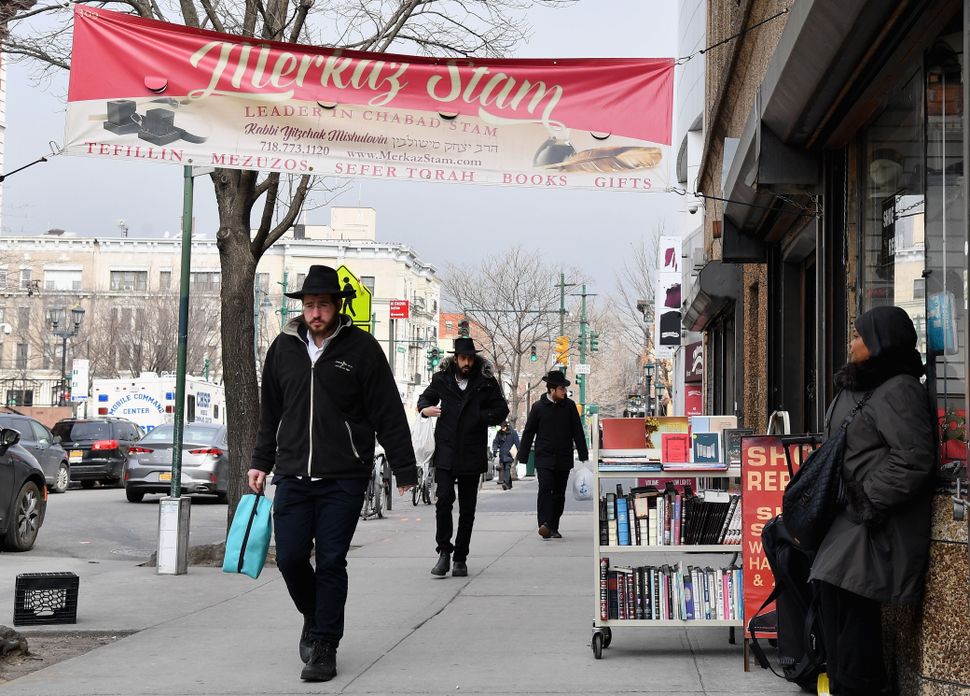 Orthodox Jewish men walks in the Brooklyn neighborhood of Crown Heights on February 27, 2019 in New York. – Residents of Crown Heights, a diverse New York neighborhood far from Manhattan’s skyscrapers, are trying to understand a spate of anti-Semitic attacks that has brought back painful memories. In recent months, several people wearing the type of black clothing and hats associated with the Orthodox Jewish community have been viciously assaulted — sometimes in broad daylight. So far this year, complaints of anti-Semitic crimes have soared by 71 percent in New York, compounding a 23 percent increase in 2018 (Photo by Angela Weiss / AFP) (Photo credit should read ANGELA WEISS/AFP via Getty Images) Image by Getty Images

Hanukkah of 2019 will be remembered as the week that the anti-Semitic violence that has become the new normal for us Orthodox Jews finally made it into mainstream consciousness. According to the Anti-Defamation League, at least 10 attacks took place over Hanukkah alone, reinforcing what we in the community have known for a while now: It’s open season on visibly Orthodox Jews. The violent run that overlay the Festival of Lights culminated in a horrific stabbing attack in the home of a Monsey Rabbi, where many were wounded as they gathered for Menorah lighting. But it comes on the heels of dozens of violent attacks that have plagued Orthodox communities across New York and New Jersey for the past few years.

Of course, there was a certain relief at having the physical attacks against us recognized: Finally, the mainstream media and even liberal and left-wing politicians and activists were speaking up about the violence against us after such a lengthy, inexplicable silence. Some argued that it took so long to speak up about these anti-Semitic attacks because the majority of the perpetrators were not white supremacists but African Americans — members of a community that is itself marginalized and frequently under attack.

That may be true. But if it is, it’s upsetting, not only because it erased our suffering but because of the racist underpinnings of such a view. After all, it was hardly the African American community in its entirety that was committing or even supporting these acts. They were committed by individuals, often young and sometimes mentally ill individuals. And though there was precious little by way of condemnation, it wasn’t like these acts of violence and vandalism were supported by our African American neighbors.

Indeed, in its newfound voice addressing these attacks, the left landed on a narrative that is almost as upsetting as their silence was: casting the attacks as a symptom of underlying tensions between the Orthodox and Black communities.

Even before the bloodshed in Monsey, the spike in attacks led Mayor Bill DeBlasio to announce on Friday that there would be an increased police presence in the three Brooklyn neighborhoods which had been hardest hit by anti-Semitic violence. These patrols, which will include more visits to shuls and other high-visibility targets, were welcomed by the local Orthodox communities, who have been begging for something like this for quite some time now, and members of my own community and other frum Jews across New York and New Jersey were relieved that finally someone was doing something. For Orthodox parents especially, it was a huge relief.

Another assault on a vulnerable Chasidic Jewish target. This unacceptable climate of open season on Jews must be vigorously confronted. We again call on City & Police leaders to stop this madness .@NYCMayorsOffice @BilldeBlasio @Pinnyringel @NYPDChiefofDept@ADL_NYNJ @NYPDONeill https://t.co/9KPEGdhLWq

But while Orthodox Jews were happy to have an added level of deterrent aimed at halting those who looking to do us harm, not everyone saw it that way. Almost immediately after the announcement, a counter argument began to develop online. Activists — many of them from the Jewish left — began to argue that there would be a cost to these increased patrols. They argued that an increased police presence would negatively impact other disenfranchised minority communities who live alongside Jews in those neighborhoods.

This is a valid concern. Police brutality against African Americans is a real issue. Many of the members of the communities where the increased patrolling is proposed have historically had a complicated relationship with the NYPD.

But it’s faulty, zero sum thinking that insists that Jews being safe enough to walk the streets of their neighborhoods is somehow in tension with protecting other minorities. It’s the language of this argument more than the solution proposed that is pitting Jewish safety against that of the communities we share.

Of course, if there were another solution, we would be happy to accept it. But it’s important to note that in addition to the increased police presence, Mayor De Blasio also announced “Neighborhood Safety Coalitions” made up of diverse members of all communities, which will go a long way towards mitigating the police presence and bringing the communities together to protect each other.

Most importantly, he’s finally offering solutions — something his critics are admittedly without.

There’s something deeply disturbing about trashing the solutions to other Jews being beaten in the streets of your own city without offering anything as an alternative. It makes me as an Orthodox Jew feel that for these people, keeping Jews safe is simply not worth it. And some just come out and ask, “Is the trade-off worth it?”

If the National Guard are deployed and more police are on the streets to keep Jews safe, what will that mean for Black communities? Is the trade off worth it? Is this the answer? Is this lasting safety for all?

The language of a trade-off betrays what underlies this line of attack: an insistence that Jewish safety means “positioning” Jews and people of color against each other. But it’s the rhetoric from the left that’s dividing these communities into two oppositional ones, not the attempts to solve the months and months of violence.

I am heartsick over how [white & POC] Jews and [Jewish & non-Jewish] POC are positioned against each other, often with assistance from reactionaries claiming to rep one community.

Imagine if we let ourselves build and fund a vision of safety that actually worked for all of us?

Put simply, if you think that solutions to the violent attacks are sowing division, you are conveying to Orthodox Jews that their safety is inconsequential to you. And perhaps even worse, you are conveying that you believe these attacks are emblematic of the communities from which their individual perpetrators hail, or that those communities would not prefer to be places where Jews aren’t attacked. It’s a view that maligns our neighbors in a way that I have not heard anyone in our communities do, and thankfully so; holding a community responsible for the actions of individual wrongdoers is the definition of racism. And while our community is not free of racism (none is), this language of a conflict between Blacks and Jews is nowhere present in the mainstream Orthodox community. There is nobody I know of who talks about these attacks as part of some more significant conflict. Nobody cares what the ethnicity is of the person who is harassing, beating, or shooting them is. All they want is to be safe.

And yet, these bad-faith actors seem focused on making sure people think it is a conflict between two communities. It is they who seem to be focused on creating greater divisions. At a time when there is a need to build bridges, they are setting them all on fire as though they were in a field of straw men. Speaking ostensibly on behalf of minority communities, these people are saying no to the proposed solution, then shrugging at the problem and suggesting nothing else.

Flooding POC neighborhoods with cops is going to carry real costs, potentially even fatal ones, for tens of thousands of people who have no complicity in these attacks. I’m also deeply uncomfortable with the optics of cops functioning as security for Jews against POC. https://t.co/WpTsaTwPR9

What’s even worse is that this muddying of the waters handicaps political leadership, turning everything leaders might be able to do to ensure Jewish safety into a more complicated issue than it has to be.

Protecting Jews isn’t — and should never be portrayed as — an attack on the African American community. Saying otherwise maligns our neighbors, and puts Jews at risk. That is precisely what anti-Semites want.

Eli Steinberg lives in New Jersey with his wife and five children. They are not responsible for his opinions, which he has been putting into words over the last decade, and which have been published across Jewish and general media. You can tweet the hottest of your takes at him @DraftRyan2016.