We liberal Jews have joined in dehumanizing our Orthodox brethren 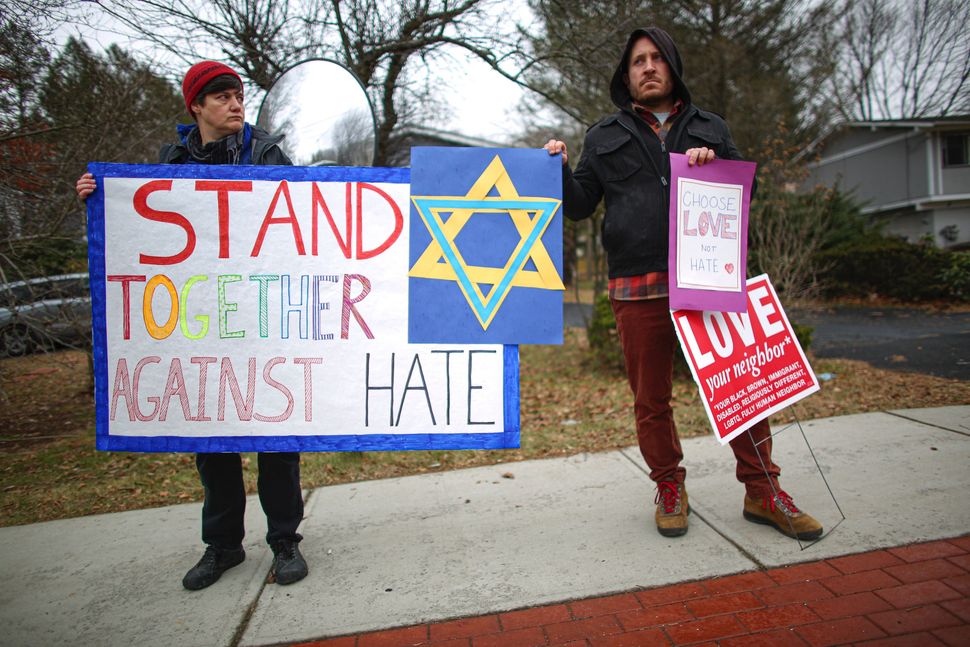 People hold signs of support near the house of Rabbi Chaim Rottenberg on December 29, 2019 in Monsey, New York. - An intruder stabbed and wounded five people at a rabbi’s house in New York during a gathering to celebrate the Jewish festival of Hanukkah late on December 28, 2019, officials and media reports said. (Photo by Kena Betancur / AFP) (Photo by KENA BETANCUR/AFP via Getty Images) Image by Getty Images

My mother likes to tell the story of her hospital roommate when I was born 24 years ago in Ramapo, New York, mere miles from Monsey, where an attacker went on an anti-Semitic stabbing rampage. Her roommate was an ultra-Orthodox woman in her early twenties who was having her fifth child, a boy. My mom was 33 years old and having me, her second and final child. Eight days later, each of those boys would have a bris, in line with the Jewish custom common to both the ultra-Orthodox and my largely non-observant family. From there, I presume our parts in the American Jewish story diverged. I was raised in Clarkstown, the town next to Ramapo, attending public schools in a secular family, while he grew up in an ultra-Orthodox family and likely has one of his own now.

I tell this story to demonstrate how different the Jewish American experience is, even for Jews born and raised in Rockland County, only a few miles apart.

But it’s not just difference. Hostility towards the region’s ultra-Orthodox community has existed as long as I can remember. “Those Jews are destroying Rockland” was something I often heard growing up, from old and young Rocklanders alike. Not Jews like me, I was reassured, just those ones in Ramapo, the ones with the payos and shtreimels. Ostensibly, these complaints were about overdevelopment and troubling decisions made about the East Ramapo schools. But the underlying hatred towards a minority community, conveyed through dehumanizing rhetoric that would make Adolf Hitler feel at home, was unlike anything I’d ever heard openly discussed in America.

As painful as it is to admit it, it wasn’t only non-Jews who spoke this way. Most remarkable was the secular Jews who tolerated — or even participated — in these vitriolic attacks.

I’ve always thought the tension between Rockland’s secular and Hasidic communities called to mind Philip Roth’s short story “Eli the Fanatic,” where the titular character feels a particular animus towards his new Orthodox neighbors rooted in a desire to prove his loyalty to his secular neighbors. Roth’s short story was set in the 1940s but these divisions remain as we enter the new decade.

Just like the non-Jews, the secular Jews had their excuses for attacking the Orthodox. “They don’t even consider us Jews!” was something I was told countless times by secular Jews. My late grandmother’s pointed response to this line of thinking was that Hitler didn’t care about such things when deciding who was Jewish and who was not. Her point was that we can’t look at the ultra-Orthodox as foreign. My grandmother believed there was one Jewish community in Rockland, not two; accept that and then discuss differences, keeping in mind that if you wouldn’t tolerate hate speech towards secular Jews, it shouldn’t be tolerated towards ultra-Orthodox Jews either.

My grandmother was not the norm, and I’m sad to say, the views of a divided community so deeply affected me that I was surprised when, after the stabbing, a close friend who lives in Germany reached out to me expressing his condolences over the attack in my community. I had taken him through Monsey when he visited to show him how culturally different it was — the billboards in Yiddish on Route 59, the ultra-Orthodox Jews who were hard to find outside of New York and Israel.

“Why offer condolences to me?” I thought. This wasn’t an attack on my community.

But that was the wrong way to think about it. This was an attack on Jews. Whether an attack occurs in a Conservative synagogue in Pittsburgh or an Orthodox home synagogue in Monsey should not have any influence on one’s response.

So my plea to my fellow secular Jews, Jews who may feel no kinship with the Orthodox or ultra-Orthodox community, or feel this was an attack solely on a part of the American Jewish community that wasn’t directed towards “us”, is as follows: What unites us as Jews need not be our religious beliefs or practice, but merely our background as Jews. Atheist or Hasidic, Ashkenazi or Sephardic, preferring matzo brei with salt or matzo brei with sugar — we must stand together despite our differences.

At the very least, our love for the religious freedom and the relative sanctuary from prejudice that brought many of our families to America should buttress our steadfast opposition to this type of hate.

Mike Gurock is a Manhattan-based management consultant. He is a graduate of the University of Pennsylvania and was born and raised in Rockland County, New York.

We liberal Jews have joined in dehumanizing our Orthodox brethren