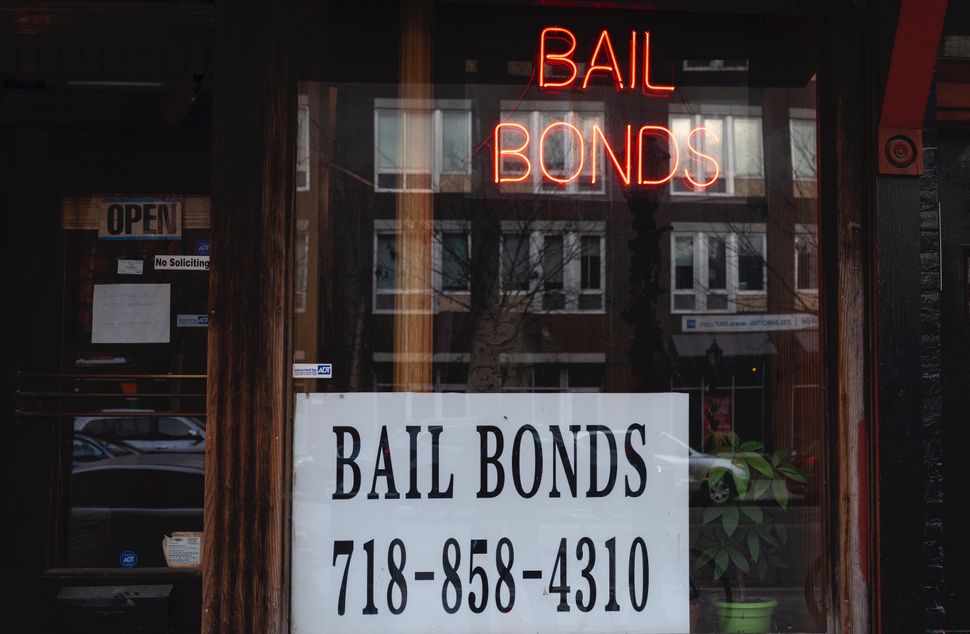 A sign advertises services for bail bonds along Atlantic Avenue near the Brooklyn Detention Complex in Brooklyn, New York, December 21, 2019. A state license is required to be a bail bondsman. (Photo by Robert Nickelsberg/Getty Images) Image by Getty Images

A week ago Sunday, 25,000 people participated in the “No Hate, No Fear” march across the Brooklyn Bridge, coming together to stand up to anti-Semitism in solidarity with the victims of recent attacks in New York. We remain concerned for their welfare and committed to keeping our communities safe.

One widely shared photo taken that day showed New York’s political and Jewish leaders clustered around a banner at the front of the march. The image echoes the iconic photo from the 1965 voting-rights march, of Dr. Martin Luther King leading marchers across the Edmund Pettus Bridge in Selma, Alabama.

King and the other courageous civil rights heroes were profiles in courage who risked their lives by crossing the Pettus Bridge in support of racial justice.

Unfortunately, some of the leaders who crossed the Brooklyn Bridge on Sunday have become profiles in capitulation or, worse, fearmongering. Rather than address the actual challenge of combating anti-Semitism, and in the rush to do something — anything — to look tough in the fight against anti-Semitism, they have pinned blame for anti-Semitism on a scapegoat — criminal justice reform and, specifically, New York’s brand-new bail reform law.

That’s especially problematic, because, for Jews, scapegoating has a long and terrible history. It is often the anti-Semite’s ploy to blame Jews for problems we were not responsible for creating.

Nevertheless, in the rush to judgment, that is exactly what is happening with the cries to “fix” bail reform, which are snowballing in New York City and, as the 2020 legislative session opens, in Albany. The argument is that the new law, which ends cash bail for misdemeanors and nonviolent felonies, is responsible for putting Jews at increased risk of being victimized in anti-Semitic attacks.

What evidence do the law’s opponents cite? They keep recycling one case that occurred before the no-bail law went into effect on Jan 1, in which Tiffany Harris allegedly used anti-Semitic slurs and slapped three Orthodox women, and was released without bail.

Harris was rearrested after hitting someone unrelated to a hate crime, was set free under supervised release, and then arrested a third time, at which point the judge, recognizing Harris has mental-health issues, civilly committed her.

What about the other anti-Semitic attacks that occurred in New York? Many in the last year involved juveniles, who are not subject to bail. And Grafton Thomas, who is suspected of attacking a Hanukkah party in Monsey, N.Y., with a machete, is charged with committing a violent felony, which is not covered by the new law; he is in jail with bail set at $5 million.

The same rationale would have prevented the two people who fatally shot three people in the Jersey City kosher supermarket from being eligible for New Jersey’s bail-reform law.

Rolling back bail reform to combat anti-Semitism is a non sequitur. It’s like washing the dishes to combat bedbugs. Some Jewish community leaders have jumped onto the revisit-bail-reform bandwagon. Instead, they should be standing up and shouting “Dayenu!”

Here’s what’s actually at issue with bail. According to the Prison Policy Institute, based on data from the U.S. Justice Department’s Bureau of Justice Statistics, 99% of the growth in the U.S. jail population between 1999 and 2014 were people awaiting court hearings who could not afford to bail out.

Bail perpetuated our society’s inequalities, because it most heavily impacted those least able to pay, which often meant African-Americans and other people of color.

Stuck in jail, these individuals lost jobs, homes, educational opportunities and custody of children. It was also often harder for them to prepare to defend themselves in court.

Those who posted bail often had to take loans from predatory bail bondsmen, who charged exorbitant interest. By contrast, individuals with means, including members of violent street gangs, had no problem posting bail, despite any danger they might pose.

Among the most prominent examples of the bail system’s injustice was Kalief Browder. Accused of stealing a backpack, he spent three years on Rikers Island as a teenager, because he could not afford to post the $3,000 bail that the judge had imposed, and ultimately committed suicide after he was released.

Unlike Tiffany Harris, Kalief Browder’s story is no isolated anecdote. It’s a particularly egregious example of a system that regularly kept individuals behind bars for extended periods of time, before they ever had their day in court.

Recognizing its unfairness, many New York City judges already were moving away from imposing bail before the state legislature passed bail reform. They began using other tools, like supervised release and automated reminders to ensure that individuals returned to court.

Rolling back bail reform, therefore, not only reverses a major legislative accomplishment, it goes against the shift in New York City away from a reliance on bail. The two most frequently made arguments in support of revising or reversing bail reform entirely ignore this reality.

The first focuses on the fact that the New York law prevents judges from considering whether an individual poses a danger to themselves or others when setting bail. That prohibition has been part of the New York law for more than 40 years. New York recognized that factoring dangerousness and ability to pay should not be connected.

Judges have other means to address danger. They can impose other non-monetary pretrial conditions and in some cases, including violent crimes, they can remand the individual to custody without bail. The no-bail law also does not alter a judge’s ability to civilly commit individuals with serious mental health issues when they pose a risk to themselves or others, or to order someone held pending a determination of the mental fitness to stand trial.

These determinations do not — and should not — depend on the ability to purchase a “get out of jail for pay” card. If judges start taking danger into account, we will be creating a whole new opportunity to bake even more racial discrimination into the bail system.

The other argument would remove hate crimes from the no-bail law. But almost all violent crimes, including most violent hate crimes, already remain bail-eligible. With respect to those hate crimes that aren’t eligible for bail — hate crimes that cause no physical injury — some advocates would take the draconian step of keeping all accused behind bars until trial.

By contrast, others want to make them bail-eligible — without offering any evidence that bail does anything to deter or prevent anti-Semitic hate crimes from occurring in the first place.

Revising or revoking New York’s nascent no-bail law won’t help to prevent anti-Semitic attacks, and Jewish community leaders need to think long and hard about the message they are sending by getting onto this bandwagon.

Moreover, many Jews, like millions of other Americans, including the major 2020 Democratic presidential candidates, now recognize that the criminal-justice system perpetuates the racial injustice and inequality that started with slavery and was passed down through lynching, Jim Crow, and segregation. Those who dispute this stark reality are the criminal-justice equivalent of climate-change deniers.

Rolling back criminal-justice reforms by scapegoating bail reform in New York in the name of protecting Jews would send a shameful and false message that preserving a racially discriminatory criminal-justice system is the price of combating anti-Semitism. This will drive a wedge between Jews and the very allies we should be working with to devise effective strategies to counter the prejudice and bigotry that has fueled the recent attacks.

It is demeaning to the fight against anti-Semitism and divisive in the effort to find common ground, and it has to stop.

It’s not enough to walk across a bridge in a show of unity within the Jewish community. “No Hate, No Fear” means we need to build bridges instead of burning them.