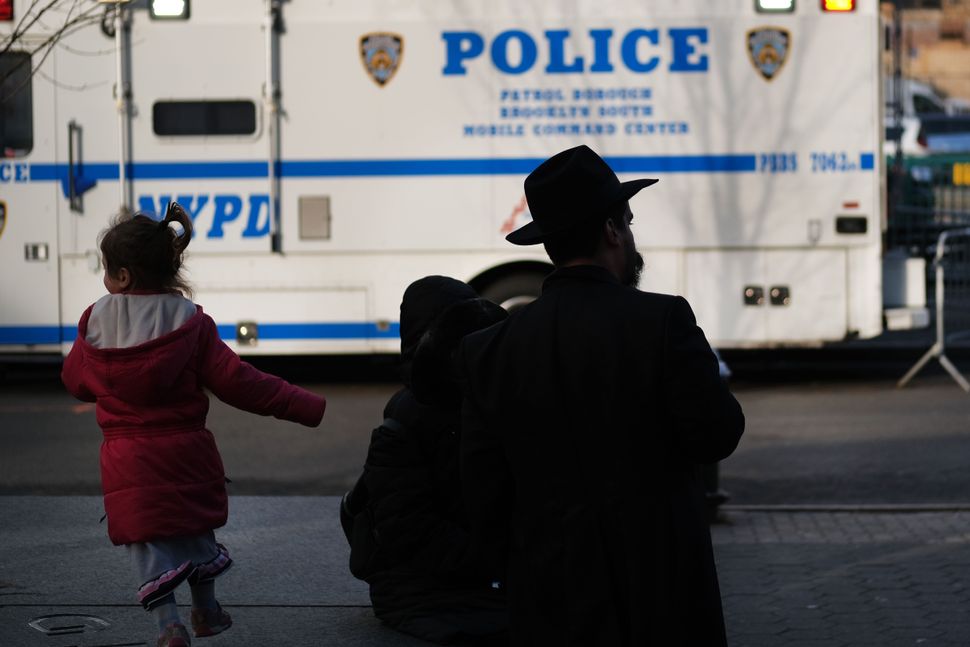 People walk through the Orthodox Jewish section of the Crown Heights neighborhood in Brooklyn on December 31, 2019 in New York City. Five Orthodox Jews were stabbed at a synagogue on Saturday evening in the upstate New York town of Monsey. Tensions remain high in Jewish communities following a series of attacks and incidents in recent weeks. (Photo by Spencer Platt/Getty Images) Image by Getty Images

It’s been more than a week since the Forward published an article by our investigative reporter, Molly Boigon, detailing her rejected requests for records from the New York Police Department about the spike the city has seen in anti-Semitic hate crimes.

In that time, our efforts have been publicly applauded by colleagues at The City, The New York Times, BuzzFeed, and New York 1. Some lawyers have offered to help us sue for the data, noting that the NYPD is notoriously fierce in fighting Freedom of Information Law actions. A congresswoman has promised to push for more information to be made public.

If fighting anti-Semitism is among City Hall’s highest priorities, why this lack of transparency? What is Deborah Lauter’s office doing to intervene? https://t.co/YWETBrEev8

Also in that time, more Jews in Brooklyn’s Orthodox neighborhoods may have been slapped or slandered or shamed. We don’t know which of these things, or how many, or by whom, or what happened to them — we don’t know because the police department won’t tell us anything beyond the total number of recorded hate crimes (10 as of Sunday) and those categorized as “Semitic” (6).

During these days since making our requests public, we have heard nothing from Mayor Bill de Blasio, who in December called the rising anti-Semitic violence a “crisis” and announced both more patrols in places like Crown Heights and new school curriculum to combat hate.

This is a really important story https://t.co/Alhavw0gR1

De Blasio, of course, oversees the N.Y.P.D. He should tell his commissioner, Dermot Shea, to comply with the Freedom of Information Law and release the records now.

We have also not heard anything from Gov. Andrew Cuomo, who held a news conference in December declaring anti-Semitism “an American cancer in the body politic.” Cuomo, of course, has no direct oversight of the city’s police department, but he could use his bully pulpit or act behind the scenes to pressure officials to do the right thing.

Why won’t the NYPD hand over documents related to anti-Semitic hate crimes? https://t.co/EPaNa8k1Cx via @jdforward

New York’s borough presidents? Silent. City council members, including those who represent these neighborhoods or sit on committees relating to criminal justice? Nothing.

What about the city’s new anti-Semitism czar, Deborah Lauter? Surely she’d like to see the records showing how many suspects have been arrested for these attacks, what were their backgrounds and motivations, how many proceeded to trial and what were the outcomes. Maybe she has the records. If so, she should release them. If not she should add her voice to ours demanding them.

This isn’t some journalistic exercise, this is a cornerstone of a functioning civic society. It’s about the public’s right to know what is happening in our communities and how our public employees are spending our tax dollars. It’s about accountability, and about insight.

The Jewish community is galvanized — 25,000 people marched across the Brooklyn Bridge last Sunday in rejection of hate and fear. The political establishment is focused — Rep. Max Rose of Staten Island held a hearing on Capitol Hill on Wednesday. People are scared.

We cannot work to fix society’s problems if we don’t understand them, and the swirling theories about what is underpinning this rising tide of hate are dangerously vague and unfounded. We need facts, data, detail, analysis, trend lines. Only then can our leaders start to really address the root problems.

Knowledge is power. But the people who hold the power have to share their knowledge. That’s how democracy works.