Why are we so obsessed with John Demjanjuk? 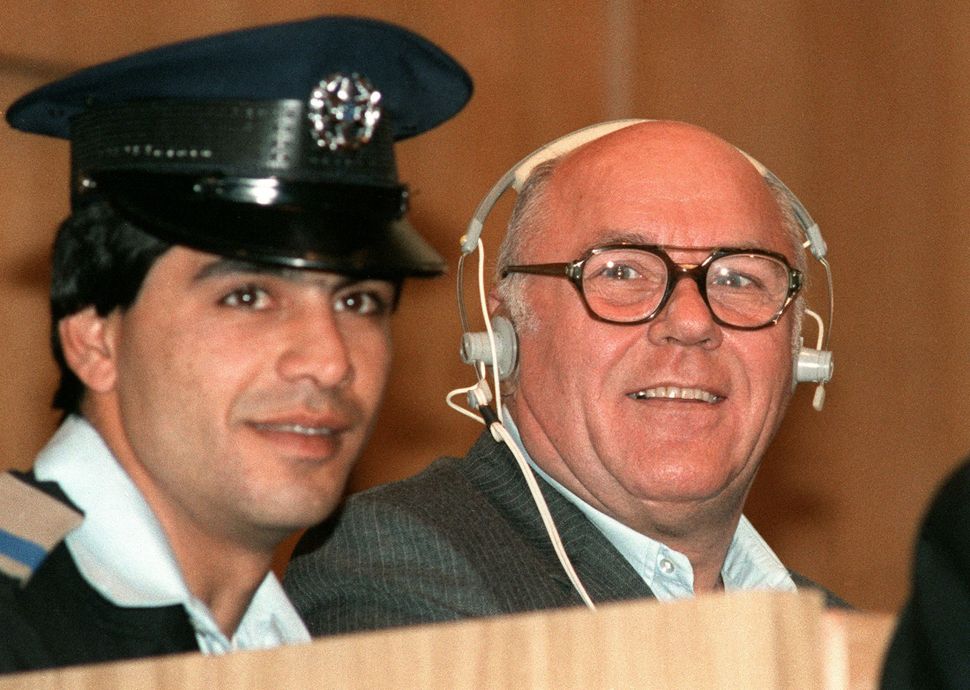 On Tuesday, the United States Holocaust Memorial Museum released a photo of Sobibor guards that purports to reveal Nazi collaborator John Demjanjuk in a guard uniform at the Sobibor Death Camp. German historian Martin Clippers said the museum used the German police to conduct a biometric examination to affirm it was Demjanjuk. 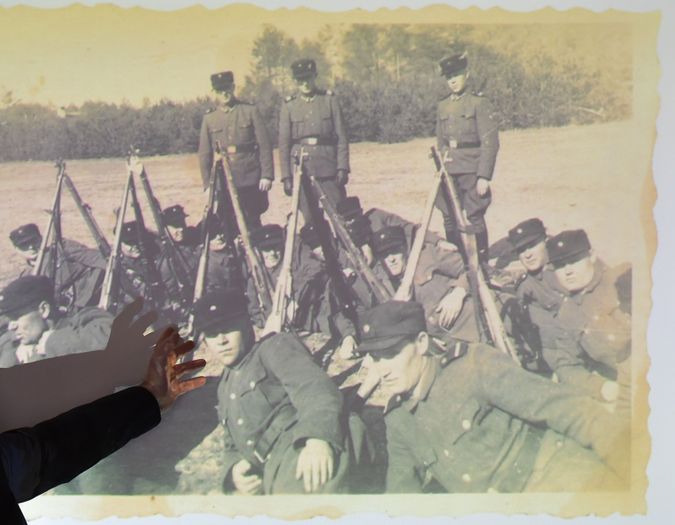 A staff member of the Topography of Terror archive points at a historical photograph allegedly showing John Demjanjuk during a press conference on newly discovered photos from Sobibor Nazi death camp on January 28, 2020 in Berlin. Image by Getty Images

I have seen the picture and it may well be him. But this photo is not what proves that Demjanjuk was at Sobibor. It is the overwhelming amount of documentary evidence found in both German and Russian archives that details Demjanjuk’s posting to Sobibor in March 1943, as well as his Trawniki Guard service ID which lists his posting to Sobibor, and his ID Number (1393) which appears on the posting documents as well, and the supporting evidence of the trial testimony of his fellow guard Ignat Danylchenko who also appears on the transfer documents.

Given all this documentary evidence, why are we still so obsessed with Demjanjuk?

Netflix’s documentary series “The Devil Next Door” chronicles Demjanjuk’s rollercoaster of trials over a 40-year period in the United States, Israel and Germany, during which he denied any and all collaboration with the Nazis and participation in the Nazi crimes of mass murder. Demjanjuk died in a nursing home in Germany in 2012, age 91, while awaiting the appeal of his German conviction as accessory to the murder of 29,000 innocent civilians — Jewish men, women and children — at Sobibor.

“The Devil Next Door” accomplishes no easy feat: After five hours, it leaves one with many questions about Demjanjuk’s guilt and leaves the viewer still wanting to know more.

I know this feeling well. For more than thirty years, since I first came across an article about John Demjanjuk’s 1986 deportation to Israel to stand trial for Nazi War Crimes — the first person to be so charged since Adolf Eichmann — I have been obsessed. I covered the trial in Jerusalem and wrote my first book about the Israeli District Court trial in 1990. I have followed every twist and turn in the case since, up to and including the Netflix documentary in which I appear prominently, and have recently published my comprehensive account of Demjanju’s trials and denials in “Ivan of The Extermination Camp.”

Part of the reason I and now so many thousands of viewers are obsessed with this case is because we don’t know everything — and what we don’t know is always more tantalizing that what we do know. Moreover, Demjanjuk’s denials, evasions and outright lies belie a fundamental mystery: How could someone who was a good husband, a good father, a church-goer and a good citizen have been a Nazi death camp murderer?

Initially, in 1987, at the time of Demjanjuk’s trial in Jerusalem, there was a great deal we didn’t know. Little was known about the Treblinka Extermination Camp where some 870,000 innocent Jews were murdered in little over a year. Even less was known about the Sobibor Death Camp where 250,000 were murdered (some 29,000 during the period Demjanjuk served there). And few people had ever heard of the Trawniki Camp where death camp guards such as Demjanjuk were trained, or the Flossenburg concentration camp where Demjanjuk also served. Almost no one had ever seen an original of a Trawniki Nazi ID Card such as Demjanjuk’s, which would prove to be a damning piece of evidence against him.

Once the Holocaust survivor witnesses testified — those few who had escaped Treblinka — the whole of Israel became obsessed with the trial, listening on the radio, pulling over in their cars to pay closer attention to the words of those who’d been “on that other planet Treblinka,” as witness Pinchas Epstein called it. But their testimony identifying Demjanjuk at Treblinka, as compelling and credible as it was, nonetheless introduced its own doubts regarding eyewitness testimony. 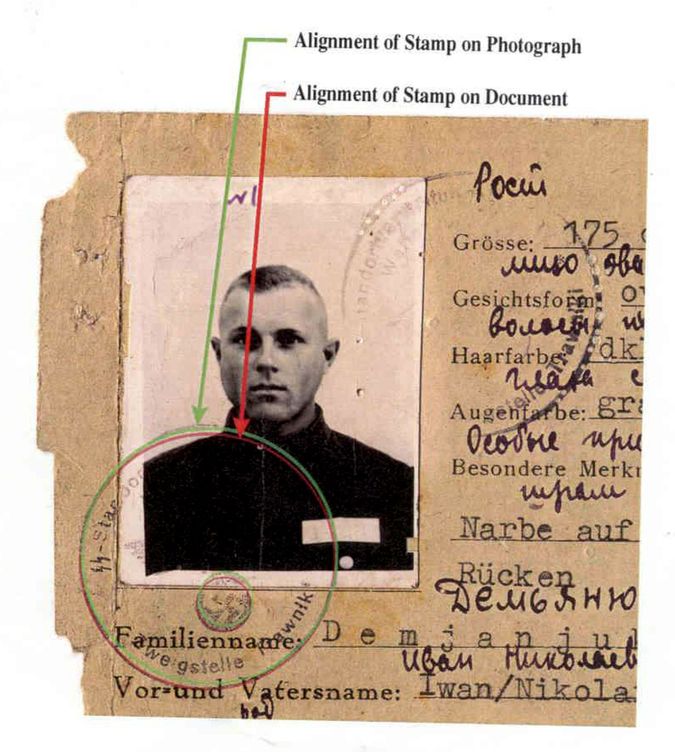 A case photo from the U.S. Department of Justice shows John Demjanjuk whose U.S. citizenship was revoked by a U.S. District Court judge ruling he entered the country illegally by hiding his past as a Nazi death camp guard. Wartime documents revealed that Demjanjuk was a guard in three SS camps and had lied to enter the United States in 1952 and to win citizenship six years later. Image by Getty Images

During the course of the trial, I also met several Holocaust deniers such as Jerome Brentar and James McDonald who were associated with Demjanjuk’s defense. They were very gregarious, friendly fellows who insisted to me that they did not deny that Jews were murdered by the Nazis, but just that they found inaccuracies in those accounts. They were truth seekers, they told me. They, too, were obsessed with every detail of the Demjanjuk case.

After the collapse of the Soviet Union, trial testimonies of other former Soviet nationals who served at Treblinka identified an Ivan Marshenko as the gas chamber operator of Treblinka. Marchenko was nine years older than Demjanjuk, substantially taller, had dark hair (Demjanjuk was at 21 already balding) and possibly had a scar on his face. The survivors who had identified Demjanjuk had been specific about his age being closer to 21-22, his baldness, his eyes, and his distinctive gait.

Although the Soviet testimonies had little probative or evidentiary value — those witnesses were no longer living, could not testify or be cross examined and there was no knowledge of whether their statements were given under duress — nonetheless, taken together, they were sufficient to create reasonable doubt that Demjanjuk was that Ivan, the monstrous and sadistic “Ivan the Terrible” of Treblinka.

This did not mean that Demjanjuk was not at Treblinka as a death camp guard or that, as a trained mechanic, he did not operate the gas chambers at some time. Just that there was doubt.

Just as we will now debate whether or not it is really Demanjuk in the newly released photos, it is the art of such true crime programs as “The Devil Next Door” to encourage viewers to think that if one aspect of Demjanjuk’s guilt is wrong or mistaken, then perhaps all of it is. But those same Soviet archives, as well as ones in Germany, revealed further documentary evidence proving Demjanjuk served at the Sobibor Death Camp as a full and voluntary participant in the mass murder there (he was paid and given leave) and at the Flossenburg and Majdanek camps. There was also evidence that Ivan Marshenko had left Treblinka by June of 1943, while those survivors who identified Demjanjuk saw him at Treblinka until the August revolt. In other words, more questions, and more doubt.

Still, extending such doubt to all of Demjanjuk’s crimes during the war years, as “The Devil next Door” attempts, or to whether that is him in the photo at Sobibor, does a disservice to the successful efforts of prosecutors and judges in the United States, Israel and Germany who over the years weighed the evidence before them, carefully and professionally, to find Demjanjuk guilty, as well as the many historians, experts and witnesses who appeared in those trials who have substantially added to what the world knows about the Holocaust.

This new photo, taken at Sobibor, if indeed Demjanjuk, adds to our knowledge of the camp and how average men participated in the heinous mass murders of thousands upon thousands of innocent Jewish men, women and children. In the case of John Demjanjuk, we now know an overwhelming amount about his Nazi service and his participation in mass murder as an experienced death camp guard.

Still, as long as everything is not known definitively about the entirety of Demjanjuk’s Nazi service, questions will remain. And so will the obsession to find answers.

Tom Teicholz is a journalist and author of Ivan of the Extermination Camp: How the Trials and Denials of Nazi Collaborator John Demjanjuk Have Added to Our Understanding of the Holocaust (Pondwood Press/Amazon).

Why are we so obsessed with John Demjanjuk?