Netanyahu traded Israel’s independence for the ‘deal of the century’ 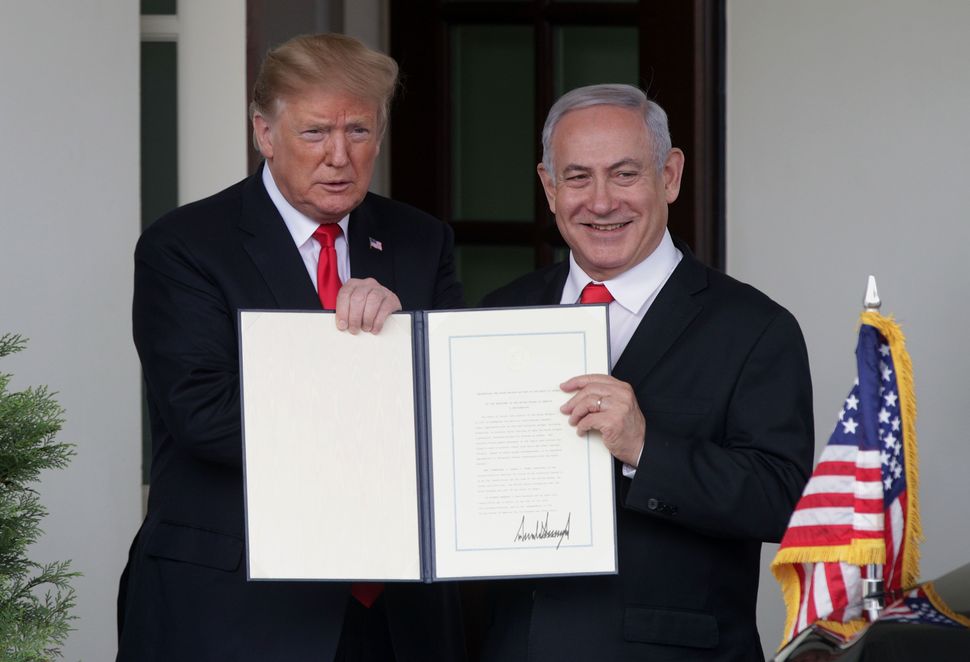 WASHINGTON, DC – MARCH 25: U.S. President Donald Trump (L) and Prime Minister of Israel Benjamin Netanyahu (R) show members of the media the proclamation Trump signed on recognizing Israel’s sovereignty over Golan Heights after a meeting outside the West Wing of the White House March 25, 2019 in Washington, DC. Netanyahu is cutting short his visit to Washington due to a rocket attack in central Israel that had injured seven people. (Photo by Alex Wong/Getty Images) Image by Getty Images

The proposals laid out by President Trump yesterday seemingly cement “unshakeable, unbreakable” U.S. support for Israel by offering the Israeli government unconditional American support for immediate annexation of land in the West Bank, while conditioning and constraining Palestinian self-determination to meet any and all Israeli security needs.

While formally presented as a basis for negotiations, the plan is structured as a diktat. Palestinians can accept the proposals or not; America will recognize Israeli annexation either way.

This unconditional American support is likely welcome to American supporters of Israel who were made uncomfortable by previous American administrations’ efforts to press both sides toward agreement through carrots and sticks: settlement freezes, aid conditionality, and other tools of statecraft.

As with Trump’s recognizing Israel’s capital in Jerusalem, moving the American embassy, and recognizing Israeli sovereignty over the Golan Heights, it may be tempting for supporters of Israel to sigh in wonder at the gifts bestowed by so sympathetic an American president.

But the Trump Administration’s focus on dictating, rather than negotiating, an outcome to the Palestinian-Israeli dispute has risky and potentially dramatic consequences for Israel and the US-Israel relationship. For however generous it may be, the Trump proposal violates the long-standing Israeli government position rejecting solutions to the conflict imposed from any outside actor, even the United States.

For decades, Israeli leaders insisted that peace could not be imposed from outside, but had to be negotiated directly between Israel and its adversaries, the Arabs who refused to recognize Israel’s existence and the legitimacy of its presence in the Middle East. This position was the basis, for example, for Menachem Begin’s rejection of the Reagan Plan in 1982. It was also the basis for Israel’s rejection of UN Security Council actions like the December 2016 condemnation of Israeli settlement activity.

Israel’s rejection of imposed solutions was deeply rooted in the very concept of Jewish self-determination, as well as in the well-grounded conviction that no imposed solution would win sufficient buy-in from Israelis, Palestinians, and Arab neighbors to last for very long. The generations of Israeli leaders from 1948 until today understood that Israel’s security in the region depended ultimately on the willingness of Israel’s neighbors to accept it; and that, until then, Israeli unilateral action might enable self-defense and deterrence, but could not provide lasting security.

The current Israeli prime minister has chosen to abandon that long-standing Israeli position, and instead to grab what he can get from an American president who doesn’t sweat the details.

It’s clear that, whatever else the Trump proposals may do, they do not end the conflict that has endangered Israel’s survival and security, and cost the lives of many thousands of Israelis, Palestinians, Egyptians, Lebanese and others for over a century.

The fundamentals of the Arab-Israeli conflict are Arab rejectionism, Palestinian dispossession, and Israeli occupation. This Trump “plan” resolves none of them.

Trump calls on Arab governments to normalize ties with Israel and negotiate peace agreements “eventually,” but ignores the clear consensus of Arab states in the Arab Peace Initiative that normalization will only follow an agreement with the Palestinians and a just settlement of the refugee problem.

In the Trump plan, Israel will remain responsible for overall control, not just of borders, but of Palestinian citizens’ movement along roads and bridges and tunnels within their supposed state, and even of Palestinian internal security to the extent that Israel feels the need.

During the four-year period in which the Trump plan says the Palestinians can consider the offer on the table, Palestinian and Israeli construction in the Palestinian-designated territory is frozen, while Israel may continue to build in the areas it intends to annex, other than a dozen tiny settlement enclaves.

Who will enforce that freeze? Israel. In other words, this plan offers no means for Israel to escape the occupation — because the proposal essentially codifies the existing relationship between Israelis and Palestinians into a permanent outcome. The Israeli government will remain responsible for every aspect of Palestinian life that it is now responsible for, and Palestinians, even if they meet the onerous conditions laid out to win statehood, will not gain real independence from Israeli control.

Looking clearly at what the Trump plan means for the reality of Israeli and Palestinian life, it’s clear that this proposal would merely shift the occupation, and the Palestinian-Israeli conflict itself, into a new phase — one that will likely demand more, and more heavy-handed, security operations by the IDF and Shin Bet against Palestinians than the present.

Given this stark reality, why would a leader as seasoned as Benjamin Netanyahu embrace the Trump proposals? Perhaps because Netanyahu himself never really bought into the possibility of Arab acceptance of Israel; he has consistently staked his political arguments on a view that the next war is always around the corner, and a siege mentality is only rational.

This plan agrees, and essentially promises Israel endless occupation and endless conflict. But if the prospect of future conflict is paramount, abandoning Israel’s longstanding rejection of imposed outcomes seems paradoxical.

One can easily imagine a capricious Trump, with different objectives in his second term, imposing other outcomes, perhaps related to Iran or Syria, on a vulnerable Israel. One can also imagine a future American president using the Israeli acceptance of American dictates as a precedent and imposing on Israelis and Palestinians new terms that are far less favorable to Netanyahu’s preferences.

In the end, one cannot ignore the strong political incentives that push Netanyahu to throw caution to the wind and embrace this American-sponsored annexation plan. Both Netanyahu and Trump face tough re-election fights election this year, as well as perilous legal challenges, and so their calculations at the moment are very short-term and self-interested. Even Benny Gantz, a cautious voice on annexation until now, couldn’t see far enough past March 2nd to avoid voicing his support for the Trump plan.

But after March comes a new Israeli government, and after that comes November. This American president’s diktat today may not be worth much a year from now; the Arab-Israeli conflict will still be here.

Tamara Cofman Wittes is a senior fellow in the Center for Middle East Policy at the Brookings Institution. She served as Deputy Assistant Secretary of State for Near Eastern Affairs under President Obama.

Netanyahu traded Israel’s independence for the ‘deal of the century’