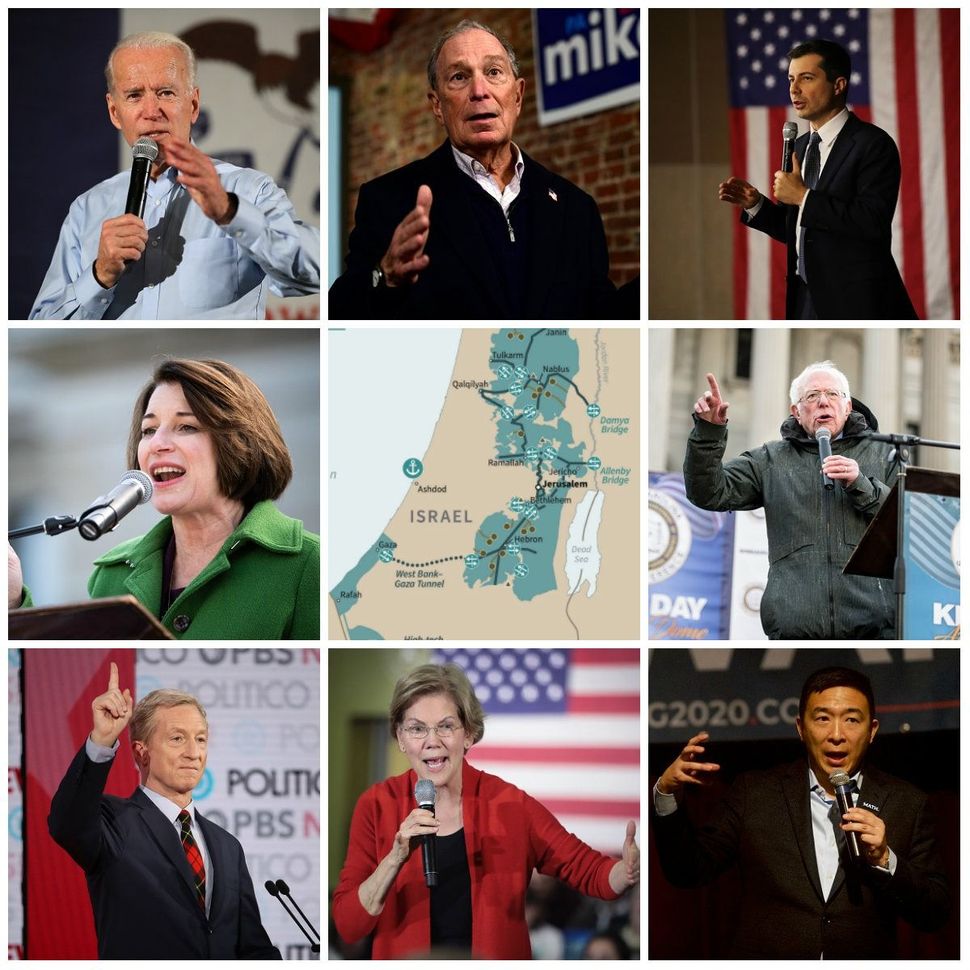 The candidates running in the Democratic presidential primary have very little positive to say about President Trump’s foreign policy — and his newly-unveiled Israeli-Palestinian peace plan is no exception.

The Democratic presidential race hasn’t touched on Israel that much —some candidates, mostly on the left, have proposed putting conditions on American military aid to the Jewish state, while others, mostly in the center, have criticized that idea.

But nearly every major candidate appeared to be on the same page when reacting to the plan — they don’t like it.

Most took issue with the fact that Palestinian leaders, who have been boycotting the Trump administration for more than a year, weren’t involved with making the plan at all and don’t approve of it. Several also criticized the fact that it approved of Israel annexing West Bank territory — which Israeli Prime Minister Benjamin Netanyahu said he would do as soon as next week.

Biden has sought to maintain the Democratic Party’s line on Israel — backing the two-state solution, supporting Israel’s right to defend itself but criticizing some of Prime Minister Benjamin Netanyahu’s actions toward the Palestinians. Biden has said that withdrawing American military aid to Israel is “bizarre” and “absolutely outrageous.” But he had no sympathy for Trump’s peace plan.

A peace plan requires two sides to come together. This is a political stunt that could spark unilateral moves to annex territory and set back peace even more. I’ve spent a lifetime working to advance the security & survival of a Jewish and democratic Israel. This is not the way. https://t.co/H6IhtP1YJd

Bloomberg, one of two Jews remaining in the race, has been the candidate who has most prioritized Jewish voters — he was the first candidate to name a director of Jewish outreach, and he made a speech in Miami last week about his Jewish identity and love of Israel. Bloomberg’s reaction was more equivocal than many others — perhaps relieved that the plan allowed for the creation of an independent Palestinian state, despite rumors to the contrary in the run-up.

Buttigieg is usually considered on the center-left, but he is one of a few candidates who has considered putting conditions on aid to Israel. He promised in June that if Netanyahu unilaterally annexed West Bank settlements, a President Buttigieg “would take steps to ensure that American taxpayers won’t help foot the bill.” Buttigieg had similar criticisms of the Trump plan’s approval of annexation.

This president’s Mideast “Deal of the Century,” like so much else he’s done in foreign policy, makes complex situations worse.

Peace requires both parties at the table. Not a political green light to the leader of one for unilateral annexation.

Klobuchar, one of the moderate candidates, told The New York Times in December that Trump’s moves have eroded bipartisan support for Israel and made the Jewish state less safe. She is a supporter of the two-state solution and has called for a resumption of peace negotiations, and opposes the annexation of the Jordan Valley. She signed a letter with 11 other senators expressing “profound concern” that Israel implementing the plan unilaterally would mean the end of the two-state solution.

Trump’s one-sided plan is a recipe for even deeper division and undermines efforts to achieve a viable and sustainable two-state solution that supports the legitimate rights and aspirations of both Israelis and Palestinians.

Sanders, the other Jewish candidate in the race, has been the most vocal critic of the Israeli government. He has said that some military aid to Israel should be redirected into humanitarian aid for the Gaza Strip. ““It is no longer good enough for us to be simply pro-Israel,” Sanders said in a November debate. “I am pro-Israel. But we must treat the Palestinian people as well with the respect and dignity they deserve.” He also signed the senators’ letter, and issued his own tweets saying the plan would “only perpetuate the conflict.”

It must end the Israeli occupation and enable Palestinian self-determination in an independent state of their own alongside a secure Israel. Trump’s so-called ‘peace deal’ doesn’t come close, and will only perpetuate the conflict. It is unacceptable.

Steyer, a hedge fund billionaire, is running on a platform of environmental sustainability. His website does not mention Israel at all. Steyer does not appear to have made a statement about the peace plan — the Forward has reached out to his campaign for comment.

Warren is a supporter of the two-state solution, and has said in October that if the Israeli government moves in the “opposite direction” from that idea, then “everything is on the table” when it comes to adjusting military aid. She also told The New York Times in June that the United States “cannot dictate the terms of a long-term settlement with the Palestinians and the Israelis.” Warren was the first presidential candidate to respond to Trump’s speech, calling it a “sham” — and promising to undo it if elected. She also signed the senators’ letter of concern.

Trump’s “peace plan” is a rubber stamp for annexation and offers no chance for a real Palestinian state. Releasing a plan without negotiating with Palestinians isn’t diplomacy, it’s a sham. I will oppose unilateral annexation in any form—and reverse any policy that supports it.

Yang, a businessman and first-time candidate, is running on a platform of instituting a universal basic income program. The foreign policy section of his website does not mention the Israeli-Palestinian conflict. Yang does not appear to have made a statement about the peace plan — the Forward has reached out to his campaign for comment.