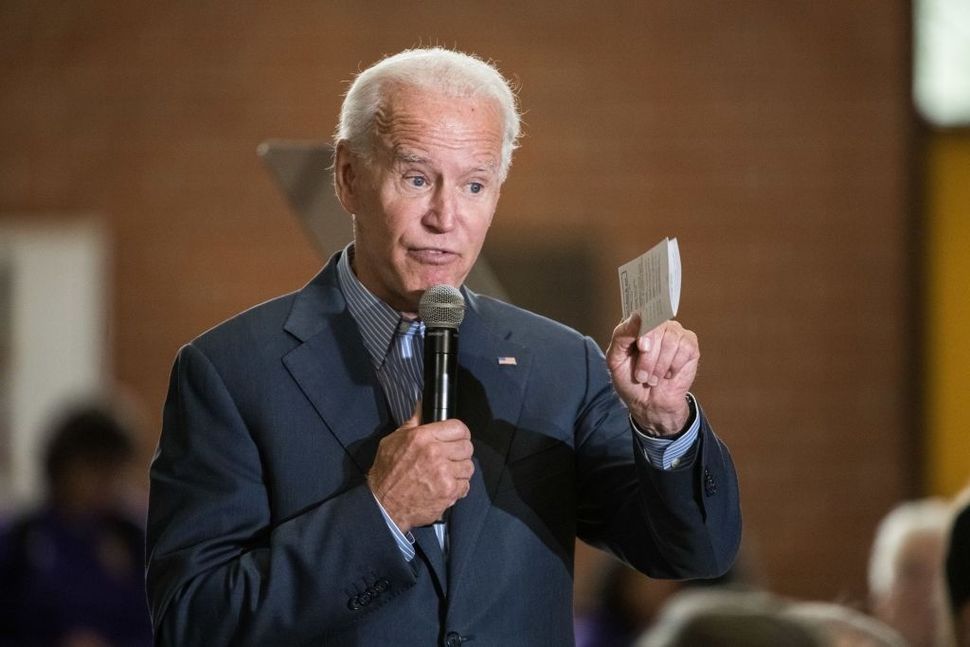 (JTA) — Presidential candidate Joe Biden says it would be a “gigantic mistake” to condition aid to Israel on stopping settlement expansion.

The former vice president told a Wall Street Journal reporter it would be “absolutely outrageous” for the United States to take that approach — a position that puts him at odds with his leading rivals for the Democratic nomination.

Sens. Bernie Sanders of Vermont and Elizabeth Warren of Massachusetts, along with Mayor Pete Buttigieg of South Bend, Indiana, in recent days have all indicated a willingness to use American aid to force policy changes by Israel. The United States gives Israel $3.8 billion annually in military assistance.

Sanders led the charge when he told the annual conference of the liberal Mideast policy group J Street earlier this week that he would tell Israel it must ” fundamentally change your relationship to the people of Gaza” if it wants continued U.S. military support. He also said some of that money should go toward humanitarian aid to the people of Gaza.

Warren has been less specific, but she told J Street that if Israel proceeds with moves to annex parts of the West Bank, the United States “should make it clear that none of our aid should be used to support annexation.” Buttigieg sounded a similar line, saying it was important “to ensure that U.S. taxpayer support for Israel does not get turned into taxpayer support for a move like annexation.”

Biden’s responses were precipitated by Wall Street Journal reporter Sabrina Siddiqui asking if he agreed with his fellow Democrats on the aid question, and on Thursday afternoon she tweeted his remarks.

NEWS: Here is ⁦@JoeBiden⁩’s full response when I asked him about leveraging US aid to Israel. He strongly disagrees with idea pushed by ⁦@BernieSanders⁩ and somewhat embraced by ⁦@SenWarren⁩ and ⁦@PeteButtigieg⁩. (Backstory: https://t.co/TrnqwUjit3) pic.twitter.com/LhCpLFprzg