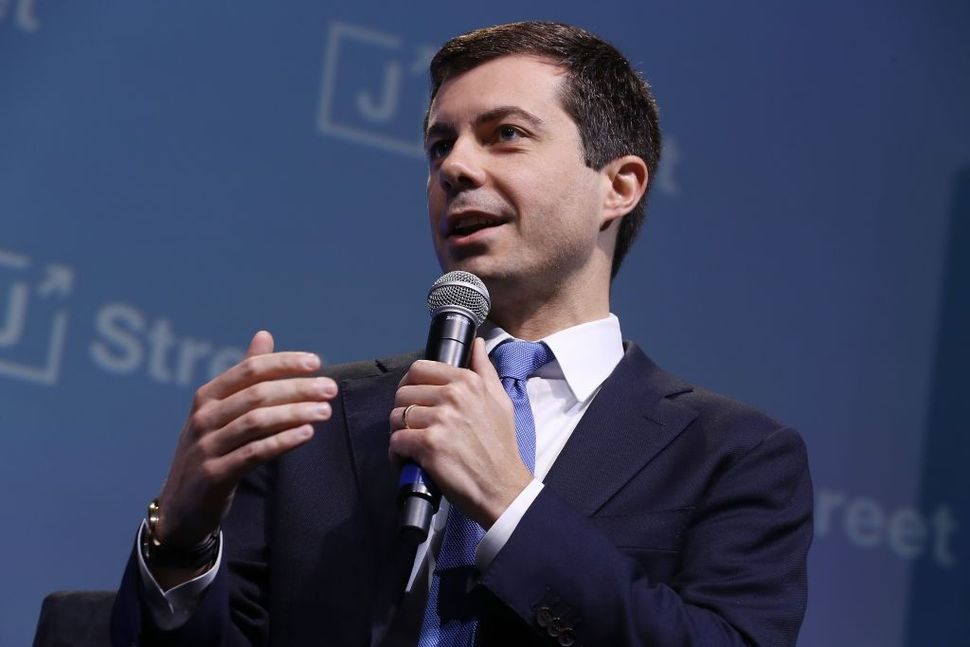 This story has been updated with J Street’s statement.

Democratic presidential candidates diverged on Monday over the question of whether to condition United States military aid on Israeli policy toward the Palestinians, which activists at the annual J Street conference here in Washington seem to be trying to make something of a wedge issue in the crowded primary field.

In separate appearances before the conclave, Sen. Bernie Sanders and Mayor Pete Buttigieg said the $3.8 billion a year should indeed come with some strings attached, while Secretary Julian Castro said using the aid as a pressure tactic “wouldn’t be my first move” and Sen. Michael Bennet said he would want to carefully weigh the impact on domestic politics both here and in Israel.

Sanders, who won the strongest ovations from the packed convention hall, also went the furthest regarding conditioning aid, saying he would do so right away based on Israel’s restrictions on travel and trade in the Gaza Strip, where poverty and unemployment is sky high.

“$3.8 billion [a year] is a lot of money, and we cannot give it carte blanche to the Israeli government,” Sanders said. “If you want military aid, you’re going to have to fundamentally change your relationship” to Gaza, he said he would tell the Israeli government if elected, adding that some aid money “should go right now into humanitarian aid in Gaza.”

A fifth Democratic contender, Sen. Amy Klobuchar, ducked the question entirely during her interview on the same stage on Sunday evening, saying only: “It’s not a good idea to negotiate these things right now.” The frontrunners in the Democratic race, former Vice President Joe Biden and Sen. Elizabeth Warren, declined invitations to appear at the conclave, which drew some 4,000 people for three days of parties and panels.

J Street does not plan to endorse any candidate in the primaries. In some ways, the focus on conditions for military aid got ahead of the organization, which has not, for example, endorsed legislation saying American money should not be used for Israeli detention of Palestinian children.

By Monday evening, Jeremy Ben-Ami, who founded J Street a decade ago as a “pro-Israel, pro-peace” alternative to AIPAC, released a statement that tried to walk a fine line on the issue, to satisfy its leftist activists without alienating mainstream Democrats.

“For too long, American taxpayers and lawmakers have been asked to provide military assistance to Israel without questioning whether the material acquired with that aid was being used as a blank check to further Israeli policies and actions that the U.S. opposes, including the entrenchment of the occupation,” it said.

“J Street believes that our tax dollars should only be used in accordance with our laws and to further our policies and interests,” he added. “Saying this does not amount to a call for reducing or conditioning American assistance. It does demand a serious inquiry into the uses to which aid is being put and consideration of what restrictions to its use are appropriate.”

On Sunday night, Ben-Ami told the convention that there were three key questions for Democrats trying to unseat President Trump.

What would they do to reverse Trump initiatives such as closing the U.S. consulate in Jerusalem that handled Palestinian affairs, cutting off aid to Palestinian refugees and closing the Palestine Liberation Organization’s mission in Washington? What new steps would they take to help Israelis and Palestinians resolve their conflict? And what “steps are they willing to consider should the occupation continue to deepen and the government of Israel consider formal annexation of all or parts of the West Bank”?

It was that last question that seemed to most animate the crowd, and was a prime focus of the candidate interviews conducted by Ben Rhodes and Tommy Vietor, the former Obama administration aides and hosts of the popular podcast Pod Save America.

Buttigieg, the mayor of South Bend, Indiana, was the first Democrat in the pack to come out for conditioning military aid, saying in June that if Prime Minister Benjamin Netanyahu followed through on his campaign promise to annex the Jordan Valley, he would ensure “American taxpayers won’t help foot the bill.” On Monday, he seemed to take that a step further, saying the same logic should apply to expanded settlement construction in the West Bank.

He likened the U.S.-Israel alliance to “a friendship where your friend is acting in a way that you think might hurt your relationship, might hurt your friend, and might hurt you,” arguing that expanding settlements and annexation were harmful to both American and Israeli long-term interests.

“What you do in that situation is put your arm around your friend and try to get them to a better place,” Buttigieg said, a line Vietor reframed as: “Mayor Pete to Israel: Stop texting your ex,” earning a roar from the crowd.

(Interestingly, this is similar to a line Ben-Ami frequently used about the two countries’ relationship when starting J Street: “It’s time to act like the big brother or the parent and to say ‘enough is enough and we’re going to take the car keys if you don’t stop driving drunk.’ https://www.newsweek.com/dcs-new-jewish-lobby-presses-israel-90393)

Castro, the Mexican-American former Secretary of Housing and Urban Development, entered the hall to Spanish music and departed with a “Gracias,” both of which the convention seemed to appreciate. Of conditioning aid, he said, “My hope is that we can work like crazy so we don’t get to that point,” adding: “I wouldn’t take it off the table.”

Instead, Castro said, he is hopeful that a new administration in Washington can work with a post-Netanyahu government in Israel “to get Israel to go back in the direction of a two-state solution so we can avoid having to condition our aid.”

Bennet, who is from the swing state of Colorado, worried about the political implications in both countries of any change in military-aid policy. “Would that strengthen the people whose actions we were objecting to?” he asked, referring to Netanyahu. As for Washington, he said, “We pick one instrument like that – in this town, that very quickly is going to become a partisan litmus test.”

Still, Bennet said he would be open to changing the United States’ protection of Israel in the United Nations and other international institutions, especially if there were any move on annexation.

“It’s a huge deal if he were to try something like that,” Bennet said. “I’m not saying it’s not part of what a president would use.” Even short of annexation, he said: “I don’t think they should be building settlements, and I do think we should be doing everything we can to limit the settlements being built.”

Klobuchar, of Minnesota, would not address the question of conditioning aid, and got the most tepid response of the five candidates from the left-wing convention, particularly when she praised AIPAC in the same breath as J Street for opposing Israel’s refusal to allow two Muslim Congresswomen, Ilhan Omar and Rashida Tlaib, to visit the country because of their support of the Boycott, Divestment and Sanctions movement.

“But let me very clear in how strongly I believe that that promise that the Prime Minister made in his political campaign was wrong,” Klobuchar said, referring to the possible annexation of the Jordan Valley. “Also the Golan Heights and what he did there, I disagreed with that.”

Pressed on why she voted for S1, a bill would grant Israel $38 billion in aid over a decade but also included a provision that protected states passing anti-BDS laws that many analysts believe challenge free speech, Klobuchar said the vote “was a difficult one for a lot of people.”

“It just showed to me what Mitch McConnell is trying to do all the time,” she added, referring to the Senate Majority Leader’s decision to package the aid agreement, which has bipartisan support, in the same bill as the more controversial anti-BDS measure. “Instead of bringing people together in support of Israel on a bipartisan basis, he and President Trump are always looking for those wedges.”

The other candidates were not asked directly about the boycott movement, but Castro brought it up when asked about how to keep young people from growing cynical about Israel, saying: “There’s a demonization of Israel in some quarters.”

“I don’t agree with BDS, I don’t support BDS,” Castro continued, earning a smattering of applause. Then he added, “I also don’t support cracking down on political speech,” and the applause grew much louder.

Asked a similar question about the younger generation, Buttigieg, who is 37, said he places “a great deal of hope in the readiness of young people to challenge” party lines and conventional wisdom.

“Mathematically it is within the lifetime of anyone in college today that the situation in Israel for Israelis and Palestinians will either reach some kind of harmony or catastrophe,” he said. “You will live to see one of those two things happen.”