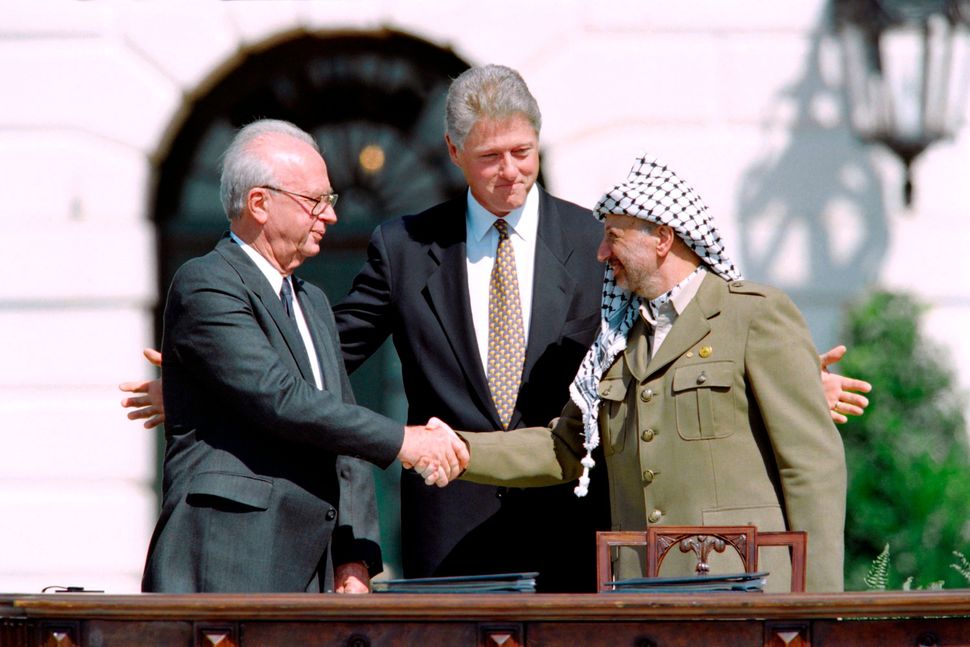 The Israelis and Palestinians started negotiating in 1991, under President George H.W. Bush. That opened the door for the Oslo Accords, which were negotiated in secret in Norway in the early 1990s. Clinton himself didn’t do much other than host the signing ceremony on the White House lawn.

Notably, the Oslo Accords did not call for what’s now call the “two-state solution,” which includes an independent Palestinian state — Israeli Prime Minister Yitzhak Rabin only would agree to “a separate Palestinian entity short of a state.”

Israel and the Palestine Liberation Organization officially recognized each other, and agreed to split the West Bank into three sectors: Area A, which would be under the control of the newly-formed Palestinian Authority government; Area B, which the Palestinian government would administer but which both sides would have security oversight and Area C, the location of most of the Jewish settlements, which Israel would continue to control.

After Rabin’s assassination in 1995, a wave of Palestinian terrorism and the ascendance of new Israeli Prime Minister Benjamin Netanyahu, the Oslo process stalled.

Frustrated by the lack of a final-status agreement, Clinton invited Palestinian Authority chairman Yasser Arafat and Israeli Prime Minister Ehud Barak to the Camp David 2000 summit. While there, Barak offered Arafat an independent state comprising the entirety of the Gaza Strip and more than 90% of the West Bank, “custodianship” (though not full control) over the Temple Mount in Jerusalem and the return of a limited number of Palestinian refugees. In return, Barak asked for peace and some minor land swaps. Arafat refused to compromise over Jerusalem and the refugee issue, and walked away from negotiations without giving a counter-offer. Within months, the region would erupt in the violence of the Second Intifada.

Like with Clinton, many of the critical Israeli-Palestinian developments that took place during his tenure had nothing to do with him. In 2002, however, the Arab Peace Initiative, promoted by Saudi Arabia and endorsed by the group of countries known as the Arab League, proposed for the first time that Arab countries would recognize Israel in exchange for a peace deal. And in 2005, Sharon’s government unilaterally withdrew from Gaza, uprooting around 8,000 settlers. Sharon hoped that this would be a positive move toward peace, but after Hamas, which the United States and Israel consider a terrorist group, overthrew the Palestinian government there and took over the area, those hopes were thwarted.

Obama, like Bush, was a supporter of a two-state solution with an independent Palestinian state alongside Israel. In 2009, Netanyahu endorsed that idea as well, though with several reservations.

In 2010, Netanyahu agreed to Obama’s request to freeze settlement construction for 10 months as a gesture of goodwill in order to restart peace negotiations — though it took nine months for the talks to actually start, and then quickly broke down over Netanyahu’s demand that the Palestinians specifically recognize that Israel is a Jewish state. The years 2013 and 2014 saw another round of U.S.-sponsored negotiations, which were based on similar parameters as past American attempts and faltered over the same issues — refugees, the status of Jerusalem, how much of the West Bank Israel would maintain control over and security issues.

Trump has gone back and forth over whether he supports a one- or two-state solution, saying that he supports whatever Israelis and Palestinians can agree on. He has made several moves that past presidents have supported in theory but declined to do in practice because of concerns over Palestinians’ reactions — including moving the American embassy to Jerusalem and recognizing the city as Israel’s capital. The Palestinian government has boycotted the Trump administration since the capital recognition in 2017.

The first phase of the Trump peace proposal, unveiled by senior advisor/son-in-law Jared Kushner in Bahrain last year, proposed billions of dollars of infrastructure improvements in the West Bank and Gaza. The political element is set to be unveiled on Tuesday. Few are aware of its contents — the State Department’s top Middle East official told Congress in October that he only knew details about Kushner’s plan from what he read in the news.