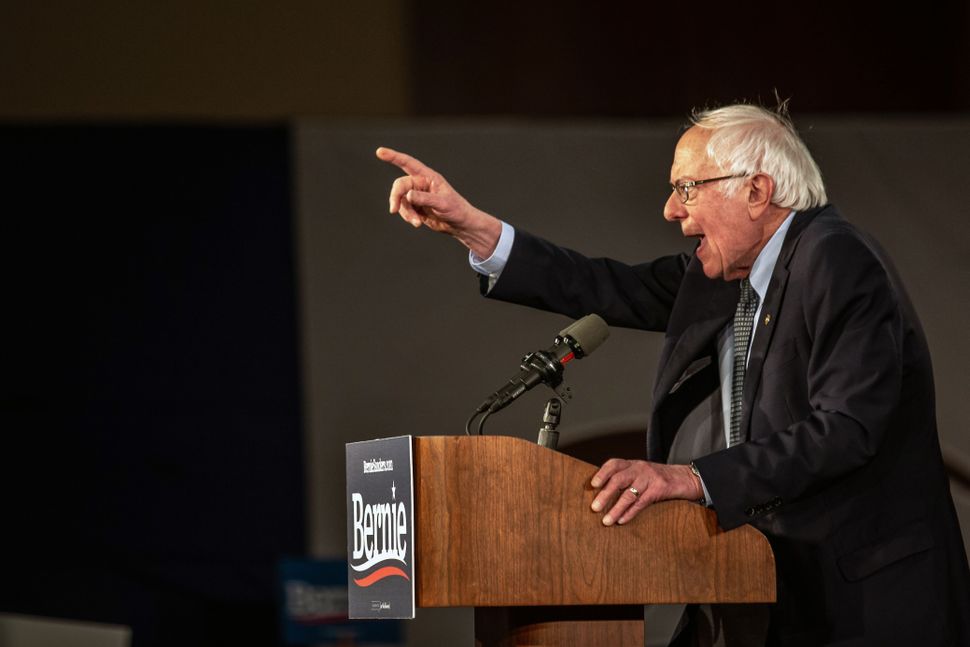 Democratic presidential candidate Vermont Senator Bernie Sanders speaks to supporters as they wait for results to come in at his caucus night watch party on February 3, 2020 in Des Moines, Iowa. (Photo by Kerem Yucel / AFP) (Photo by KEREM YUCEL/AFP via Getty Images) Image by Getty Images

Perhaps nothing represents the strange duality of the place of Jews in the United States in 2020 than the fact that a Jew may well have won the Iowa Democratic caucuses — and he did it with very little support from actual Jewish voters.

Though the massive debacle that was the caucuses means we don’t yet know the final tally, preliminary results indicate Bernie Sanders won the popular vote — a milestone in American Jewish history, whichever way you look at it.

But American Jews seem unmoved by the prospect of electing the nation’s first Jewish president; a recent poll suggested only 11% of Jewish Democrats plan to vote for Sanders in the nominating process, meaning he actually has less support from Jews than from any other religious group. The Vermont senator does best among voters who do not claim any organized religious affiliation, and among Muslim voters.

This could be a sign of just how well-integrated into American culture Jews are. We feel sufficiently assimilated that we can simply vote for the candidate of our choice, without prioritizing Jewish representation in politics.

But there is another, darker interpretation of Sanders’ lack of traction with Jewish voters, one that has emerged in hushed tones in conversations I’ve had as his poll numbers surged in the past few weeks. Perhaps Jews are not supporting the Sanders campaign in large numbers because we worry about how the rise of a prominent Jewish socialist will stoke anti-Semitism.

There is little doubt American Jews believe anti-Semitism in this country is a growing problem. In a recent poll by the American Jewish Committee, a whopping 84% said it has increased over the past five years, and 42% said Jews are less secure in the United States.

And while American Jews do not hold the left blameless, in the age of Trump, we’re a lot more concerned about right-wing anti-Semitism. Fully 78% consider the extreme right to be a “very serious” or “moderately serious” threat to our safety, compared to only 36% who feel that way about the left.

For more than a century, far-right rhetoric has associated Jewishness with socialism and communism. The claim is simple. As historian Paul Hanebrink writes, the far-right in Europe could not accept that the success of the 1917 Russian Revolution represented genuine homegrown support for leftist politics, so communism had to be explained as part of “a Jewish plot to overthrow civilization and impose foreign rule on the nations of Europe.”

If socialism and communism were Jewish plots to undermine the homeland, then their success could be explained without confronting the possibility that they reflected genuine popular grievances against the existing political order. Thus the myth of “Judeo-Bolshevism” provided the political right with a convenient rhetorical means of deflecting attention from “their own inability to produce social reforms or to address widespread poverty.”

In 1919, the dean of the Columbia University School of Journalism published the Protocols of the Elders of Zion in the Public Ledger, claiming that this famous anti-Semitic hoax was actually an exposé about the dangers of Judeo-Bolshevism. Henry Ford claimed that this publication awakened him to the danger of Judeo-Bolshevism and so convinced him to print his notorious tract The International Jew, of which the future head of Hitler Youth later said, “I read it and became antisemitic.”

A 1948 Jewish Committee study found that 21% of Americans believed “most Jews are Communists.” And two-thirds of the people questioned by Senator Joseph McCarthy’s notorious Senate Committee on Homeland Security and Government Affairs in 1952 were Jewish.

Whenever rapid social change threatens the stability of the existing social order, the right-wing is tempted to fall back on the explanation of left-wing politics as a Jewish plot “to tarnish their opponents on the left as anti-national, cosmopolitan agents of… cultural restructuring.”

Already, we see the right-wing turning to allegations of Jewish perfidy to avoid confronting the possibility that left-wing politics might genuinely be growing more popular in response to real grievances.

President Trump has claimed rising migration to the U.S. is a plot funded by the Jewish philanthropist George Soros. And Christian broadcaster Rick Wiles, who recently received White House press credentials, claims Trump’s impeachment is a sign the country has been “taken over by a Jewish cabal, a Bolshevik revolution.”

So given the return of Judeo-Bolshevism on the right, it isn’t surprising that some Jews might be nervous about supporting a Jewish socialist for president.

Compounding this problem is the fact that Sanders has faced absurd allegations of anti-Semitism from the right, in part based on his support from two Muslim Congresswomen critical of Israel, Rashida Tlaib and Ilhan Omar.

That’s right. For the right-wing, Sanders is somehow both an anti-Semite because he stands up for Palestinian rights and a Jewish agent of socialism.

This reflects a longtime distinction between “good Jews” and “international Jews,” drawn in a 1920 article by Winston Churchill, which put in the “good category” “national Jews” assimilated into British culture and Zionist Jews in Palestine, and into the malevolent one those who fueled “this world-wide conspiracy for the overthrow of civilization.” Some American Jewish organizations seem willing to replicate this distinction, defining Sanders as a bad “international Jew” because of his criticisms of Israel.

Of course, American Jews should support whomever they want for president. But with rising anti-Semitism directed against the left, Jews should defend Sanders against the return of the Judeo-Bolshevism canard — even if they disagree with him on Israel.

Whether Sanders ultimately becomes the Democratic nominee, his success in Iowa is a sign of both the strength and insecurity of American Jews in 2020. Going forward, we’re going to have to say that there aren’t good and bad Jews, loyal and disloyal Jews — there are just Jews, and we as Jews are going to play a major role in American public life.

Joel Swanson is a Ph.D. student at the University of Chicago, studying modern Jewish intellectual history and the philosophy of religions. He is not, contrary to what this column may suggest, endorsing Bernie Sanders or anyone else for president at this time, and he is indeed fully confident that nobody in the world is waiting for his presidential endorsement to determine their vote. Find him on Twitter at @jh_swanson.