Pro-Israel Attacks Against Sanders Show How Much He’s Resonating 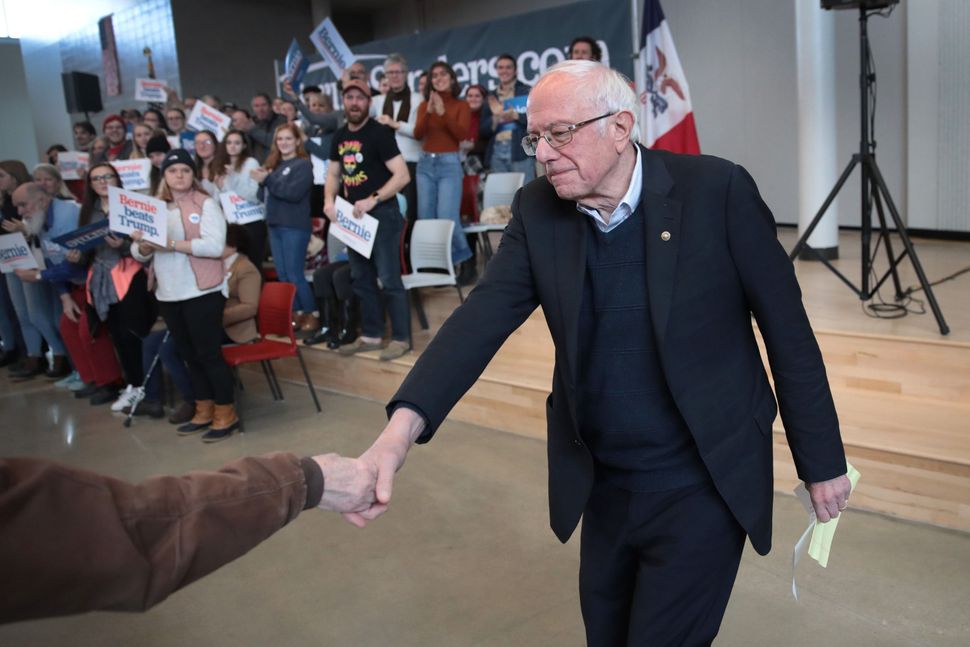 NEWTON, IOWA - JANUARY 11: Democratic presidential candidate Sen. Bernie Sanders (I-VT) arrives for a campaign stop at Berg Middle School on January 11, 2020 in Newton, Iowa. A recent poll has Sanders with a narrow lead in the state ahead of the 2020 Iowa Democratic caucuses being held on February 3. Rep. Rashida Tlaib (D-MI) was expected to campaign with Sanders at the event but was not able to attend because of weather. (Photo by Scott Olson/Getty Images)

This past week, the Super PAC Democratic Majority for Israel began running ads in Iowa attacking Senator Bernie Sanders of Vermont, as polls showed him tied with Joe Biden in the lead for the Iowa Democratic caucus. The group, which has said it is “deeply disturbing” that Sanders has “surrogates and endorsers who hate Israel, support BDS and have repeatedly made antisemitic statements,” is apparently now so worried about the possibility that Sanders might win the Democratic presidential nomination that it is investing $681,000 in ads against him — its first ads ever.

.@DemMaj4Israel says it’s “deeply disturbing” that @BernieSanders is “surrounding himself with a number of surrogates and endorsers who hate Israel, support BDS and have repeatedly made antisemitic statements.” This is reference to @IlhanMN, @AOC, @RashidaTlaib endorsement pic.twitter.com/7pJZeKMTaU

The PAC’s president, Mark Mellman, claimed Sanders uses “hyperbolic and vituperative language designed to stigmatize Israel,” and that compared to all other Democratic presidential candidates, “Sanders is in a uniquely bad place concerning the U.S.-Israel relationship.” Mellman, who brags that he has “helped guide the campaigns of twenty-nine U.S. senators, ten governors, over two dozen members of congress, and numerous state and local officials,” is a consummate Democratic Party insider, and like much of the Democratic Party establishment, he fears a Sanders nomination.

But there’s just one surprising part of this anti-Sanders advertisement: It does not mention Israel once.

That’s right. The very first television ad ever bought by a super PAC explicitly founded “to maintain and strengthen support for Israel among Democratic leaders including presidential and congressional candidates” does not actually say anything about Israel. Instead, it focuses on vague concerns about Senator Sanders’s “electability” against President Trump in November, including his health. Only one thing can explain it: The Democratic Majority for Israel knows what polls increasingly show: Bernie Sanders’s positions on Israel and Palestine are much closer to the mainstream of the Democratic Party than are those of establishment Democratic operatives like Mark Mellman and the DMFI.

To be sure, the majority of Democrats still consider themselves broadly pro-Israel, with 41% of Democratic primary voters reporting they hold a positive view of Israel as a country, compared to only 16% who hold a negative view. (The rest do not hold strong views of Israel one way or the other, which is not surprising, since most American voters don’t often think about foreign countries.)

But this broadly positive view of Israel among Democratic voters is increasingly coinciding with sharp criticism of Israeli government policies concerning the Palestinian people.

And this growing criticism of the Israeli government is not merely theoretical, either. Increasingly, Democrats want the US government to take concrete actions to pressure Israel. 63% of Democratic voters support reductions in US military aid to Israel for human rights violations, compared to only 11% who oppose it.

And it’s not coincidental that Sanders, one of two Jews running for the Democratic presidential nomination, has gone the furthest in calling for the US government to condition ongoing military aid to Israel on ending the occupation of the West Bank and improving living conditions for Palestinians in Gaza. Like most Democratic voters, Sanders sees being pro-Israel as fully compatible with supporting Palestinian rights, insisting that “what US foreign policy has to be about is not only being pro-Israel, we must be pro-Palestinian as well.”

But contrary to what party insiders have insinuated, Sanders’ supporters don’t “hate Israel.” Certainly, Sanders does not. He identifies as a Zionist, and he has discussed his time living at kibbutz Shaar Ha’amakim near Haifa in the early 1960’s as formative to his democratic socialist worldview. He has called for leftists in the United States “to acknowledge the enormous achievement of establishing a democratic homeland for the Jewish people after centuries of displacement and persecution,” and argued that his strong support for ending the occupation is rooted as much in his fear that it threatens the democratic character of the Israel he visited in 1963 as it is in his genuine concern for Palestinian rights.

If those positions mean someone hates Israel, then the party establishment is defining “pro-Israel” in a way that excludes most of its own party.

The DMFI ad-buy against Sanders is part of a larger establishment Democratic freak-out about the possibility of Sanders winning the Democratic nomination. And of course, Democratic operatives have the right to support whomever they want in the primary.

But there’s no denying the facts: Despite their name, Sanders has more claim to be in the majority of the Democratic electorate than groups like the Democratic Majority for Israel.

Correction: The original version of this article contained several misleading statements about the Democratic Majority for Israel, a pro-Israel Super Pac. It incorrectly stated that the group had described it “deeply disturbing” that Senator Sanders had among his surrogates Reps. Ilhan Omar and Rashida Tlaib; in fact, the group used that phrase to describe “surrogates and endorsers who hate Israel, support BDS and have repeatedly made anti-Semitic statements.” The only person the the Democratic Majority for Israel named was Brooklyn activist and former Women’s March leader Linda Sarsour. The original article also incorrectly said the Democratic Majority had raised concerns about Sanders’ “age and health” when it had only mentioned his health. And it wrongly mentioned the group among party insiders who have suggested Sanders “hates Israel.” The Forward regrets the errors.

Joel Swanson is a Ph.D. student at the University of Chicago, studying modern Jewish intellectual history and the philosophy of religions. He is not, contrary to what this column may suggest, endorsing Bernie Sanders or anyone else for president at this time, and he is indeed fully confident that nobody in the world is waiting for his presidential endorsement to determine their vote. Find him on Twitter at @jh_swanson.

Pro-Israel Attacks Against Sanders Show How Much He’s Resonating