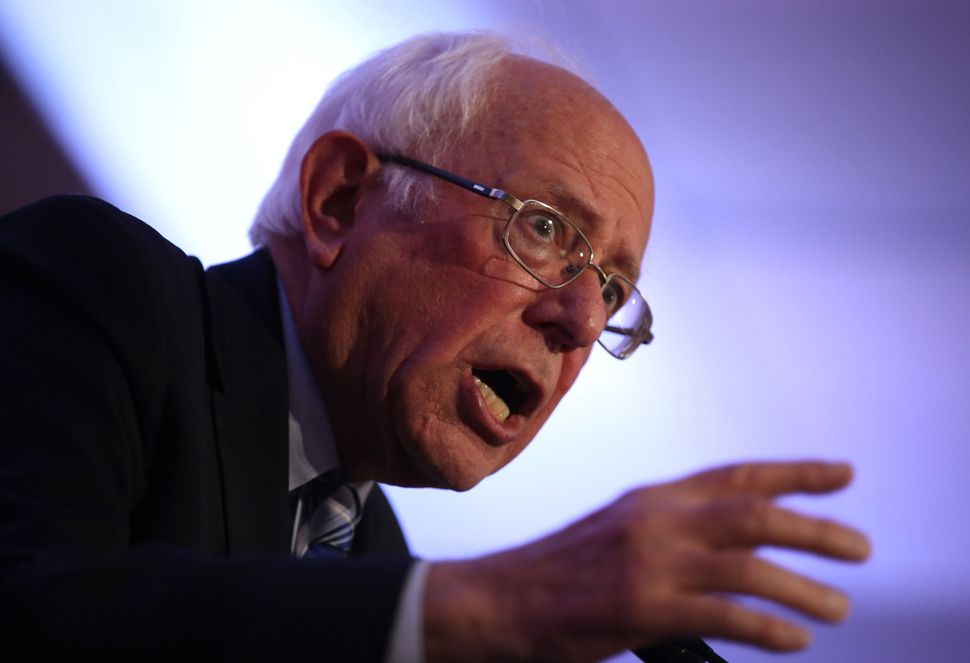 A controversy involving a top campaign surrogate is proving to be a setback for Sen. Bernie Sanders as he works to earn more Jewish support ahead of the Iowa Democratic caucus, less than two months away. It’s the latest example of Sanders, the most successful Jewish presidential candidate in American history, drawing anger from Jewish voters over what some see as his lack of concern for their specific communal issues.

In a speech at the American Muslims for Palestine annual conference in Chicago over the weekend, former Women’s March leader Linda Sarsour, asked how people can claim to be against white supremacy but support “a state like Israel that is based on supremacy, that is built on the idea that Jews are supreme to everyone else.”

After an online outcry from many Jews, including Anti-Defamation League national director Jonathan Greenblatt, Sarsour wrote a Twitter thread apologizing for the “confusion” her statement had caused, claiming she was merely referring to Israel’s recently-passed Nation-State Law.

But the damage was done, and Jews once again condemned not only Sarsour for what they saw as her inadequate apology, but also Sanders for continuing to associate with her and not issuing a condemnation of his own. (Sarsour and the Sanders campaign did not respond to requests for comment)

Polls and donation data have consistently shown for months that Sanders has less support among his fellow Jews than he does among the general population. One key reason is the presence in his ranks of Sarsour and others who are harsh critics of Israel, both voters and experts told the Forward.

One such voter is Susan Shapiro, an author in New York who says she’s been left-wing since she was 10. “I wanted to love Sanders,” she told the Forward. But, she added, “Linda Sarsour has said so many anti-Semitic, anti-Zionist comments that there’s no way I’m going to vote for a candidate who is aligned with her.” Other Jews she’s talked to feel the same way, she said.

The issue is not that Sanders is a critic of Israeli Prime Minister Benjamin Netanyahu – a 2018 poll found that more than 60% of American Jews oppose at least some Israeli policies.

But Steven Windmueller, an emeritus professor at Hebrew Union College who studies American Jewish political behavior, told the Forward earlier this year that many Jewish Democrats think Sanders hasn’t sufficiently pushed back against harsh anti-Israel sentiments coming from the “Squad” of Reps. Alexandria Ocasio-Cortez, Ilhan Omar and Rashida Tlaib, all of whom have endorsed the senator and used language to criticize Israel that even other pro-Palestinian Democrats have blanched at.

Indeed, Benjamin Bloomenthal, a former Democratic statehouse candidate in Massachusetts, said the fact that Sanders accepted endorsements from Omar and Tlaib, both supporters of the boycott, divestment and sanctions (BDS) movement against Israel, was “where I draw the line.”

There are lots of reasons why Jews may not be in Sanders’s camp: They might think he’s too old, or fear a Jewish president could engender more anti-Semitism. Since Jews are on average older and wealthier than the general public, they also lean more moderate and may be less enthusiastic about his democratic socialist policies like Medicare for All, argued Aaron Keyak, the former executive director of the National Jewish Democratic Council.

But some self-described progressive Jewish voters say his embrace of Sarsour is a bridge too far.

“As a Jewish-American, as someone who ran as a progressive, it concerns me deeply” that Sanders “has literally not said one word regarding his surrogate,” said Bloomenthal, who supports Medicare for All.

And Rabbi Jacob Herber of Wisconsin tweeted Tuesday in response to Sarsour’s remarks that despite the fact that he abhors Trump, “I’ll be damned if I’m going to vote for Bernie Sanders.”

Sanders, who was criticized during his 2016 presidential campaign for not talking enough about his Jewish background, has done much more of that this time around, including an essay in Jewish Currents titled “How to Fight Antisemitism.”

But Bloomenthal argued that Sanders’s silence after Sarsour’s remarks betrayed the promises he made in his op-ed.

“It is true that some criticism of Israel can cross the line into antisemitism, especially when it denies the right of self-determination to Jews, or when it plays into conspiracy theories about outsized Jewish power,” Sanders wrote. “I will always call out antisemitism when I see it.”

Bloomenthal argued that by Sanders’s own definition, Sarsour – an anti-Zionist who does not believe there should be a Jewish state – is an anti-Semite, yet the senator has said nothing.

Keyak argued that while Sarsour’s remarks were troubling, a distinction should be made between her views and Sanders’s, since the senator, unlike the activist, believes in a two-state solution and is opposed to BDS.

To be sure, Sanders does not need Jewish votes to win the Democratic primary. Nobody needs Jewish votes to win the Democratic primary. The fact that Jews are overrepresented among Democratic donors means that the lack of widespread Jewish enthusiasm for Sanders could conceivably affect his cash reserves – except for the fact that he already has the most successful small-dollar fundraising program in political history.

But if he got the nomination, would the lack of Jewish enthusiasm hurt him? Put another way: How many “Never-Sanders” voters are there among Jewish Democrats?

Jews, after all, are one of the most consistent Democratic voting blocs, and are also the most anti-Trump religious group. Persuading moderate Jewish Democrats to cross the aisle and vote for the hated Trump is highly unlikely to be successful beyond a “handful” of Never-Sanders voters, Keyak said. Still, enough dissenters could be costly in a swing state like Florida.

If the Vermont senator got the nomination, “I would hold my nose and vote for Sanders,” Bloomenthal said, because four more years of Trump “would be a disaster.”

Shapiro was extremely reluctant to consider the possibility of Sanders winning the primary. But if she had to choose between Sanders and Trump, what would she do?

“I would go to therapy,” she said.