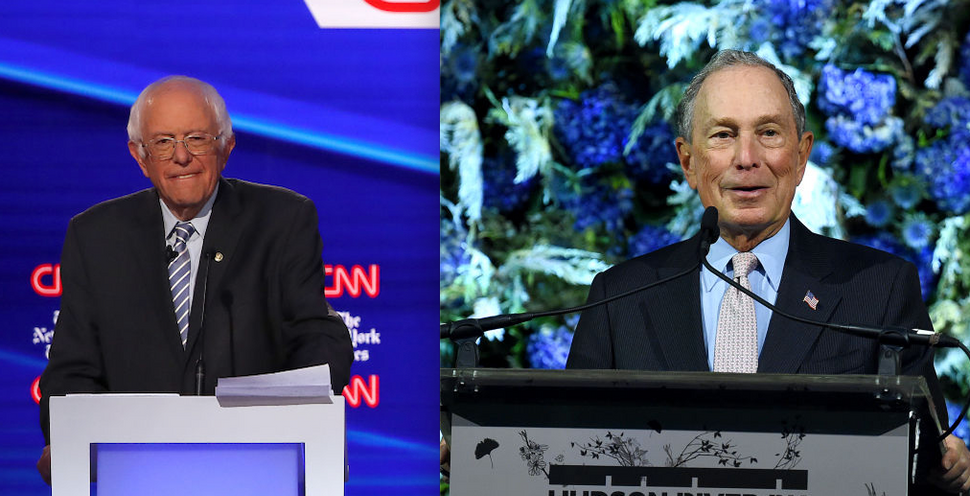 Michael Bloomberg’s official entry into the crowded contest for the Democratic nomination for president means, among other things, that we have two serious contenders who are Jewish, a first in American history: Mayor Bloomberg and Vermont Senator Bernie Sanders. And though they are practically the same age and share a common history, they are two very different archetypes of Jewish American life, a fascinating study in contrasts.

One can surmise how Sanders feels about Bloomberg; opposition to billionaires is after all a centerpiece of his campaign. And Bloomberg is no big fan of Sanders, either. He has explicitly the Vermont Senator compared to President Trump, calling Sanders a “demagogue.”

But whatever they think of each other’s politics, Sanders and Bloomberg aren’t simply facing off against each other. They also represent two models of what it means to be an American Jew: studied centrism and assimilation, vs. radicalized minority. American Jewish history has been shaped by the struggle over which of these identities should reign supreme. And now an American race for the presidency may be, too.

Sanders and Bloomberg were born within months of one another during the Second World War. Both men are the children of Polish Ashkenazi Jewish immigrants. Despite Bloomberg’s reputation for immense wealth today, neither of them grew up wealthy.

Both had long careers before entering electoral politics, albeit careers in very different fields. And despite the fact that Bloomberg apparently belongs to a synagogue and Sanders does not, both have drifted from the levels of Jewish practice that they were raised with, and have become less observant over the years.

But that’s where the similarities end. Bloomberg represents his generation of assimilated postwar American Jewry, while Sanders’ politics are the politics of interwar eastern European Jews and Jewish immigrants of his parents’ generation, a politics that combined a strong commitment to universalist socialism with a particularist commitment to Jewish culture and autonomy.

Bernie Sanders’s politics reflect the priorities of an Ashkenazi Jewish community that, despite its broad assimilation into whiteness and white privilege in the U.S., still remembers its history as a minority. Michael Bloomberg, on the other hand, is a Jewish politician for a community that has attempted to assimilate fully into whiteness in the United States and lose its minority status.

Bloomberg’s own family testifies to this shift in American Jewish identity. At a young age, his family moved from the city of Boston, where he was born, to a Boston suburb, paralleling a broader post-World War II “exodus to the suburbs” among American Jews.

As mayor, Bloomberg consistently pursued racially biased policies; in addition to stop and frisk, he supported an NYPD program to surveil the Muslim community of New York, even vetoing a City Council ordinance to provide greater oversight of the program. His support for stricter gun control legislation is also based on beliefs such as his claim that cities need to focus on keeping guns away from individuals who are “male, minority and between the ages of 15 and 25” — despite the fact that a strong majority of mass shootings are committed by white shooters.

So it’s not surprising that Bloomberg consistently performed better among white voters than among racial minorities.

Sanders, too, has had his own oft-remarked difficulties attracting the support of black voters and other voters of color, particularly the older generation of voters of color. But he has remarkable support from Muslim voters — support which was credited for his underdog victory in the 2016 Michigan Democratic presidential primary.

And despite what some may think, it is not in any way surprising that Sanders has the support of Rashida Tlaib and Ilhan Omar, the first two Muslim women to serve in Congress, following his staunch defense of these politicians against repeated Islamophobic attacks.

Sanders’s support from the first Palestinian American member of Congress, of course, points to another significant distinction between the Jewish politics of these two politicians. Coming from a Bundist tradition skeptical of Zionism and committed to remaining in diaspora where one lives, Sanders has been the Democratic politician most critical of the state of Israel, though he calls himself a staunch Zionist, and indeed talks about his time on a kibbutz as formative for his socialist worldview. And yet, Sanders has gone further than any other Democratic candidate in condemning Israel’s racist policies and calling for a reevaluation of US military aid to Israel. Those who think it odd that a Jewish politician would be among the greatest critics of Israel in mainstream American politics should think more about the rich non-Zionist tradition of Bundism.

Michael Bloomberg, in contrast, has perfectly respectable mainstream centrist American Jewish positions on Israel. He twice flew to Israel to express support for Israel in its attacks on Gaza, and as mayor of New York, he instituted a surveillance program targeting Muslim Americans modeled on Israeli policies in the West Bank. Nothing in Bloomberg’s record suggests that he would in any way challenge American political support for Israel.

Bloomberg and Sanders, then, represent two distinct ways of understanding Jewish identity and Jewish politics. Bloomberg represents a generation of American Jews who tried with all their might to assimilate into American whiteness, and who in many respects earned access to the full benefits of white privilege for American Jews.

Sanders, in contrast, represents an earlier Jewish political tradition forged by the experience of being racialized as a minority, and which remembers this experience even while the life experiences and material conditions of American Jews today differ substantially from those of Jews in interwar Poland.

Joel Swanson is a Ph.D. student at the University of Chicago, studying modern Jewish intellectual history and the philosophy of religions. He might consider becoming a member of the Jewish Labour Bund, except that he’s skeptical of any groups that would have someone like him as a member.