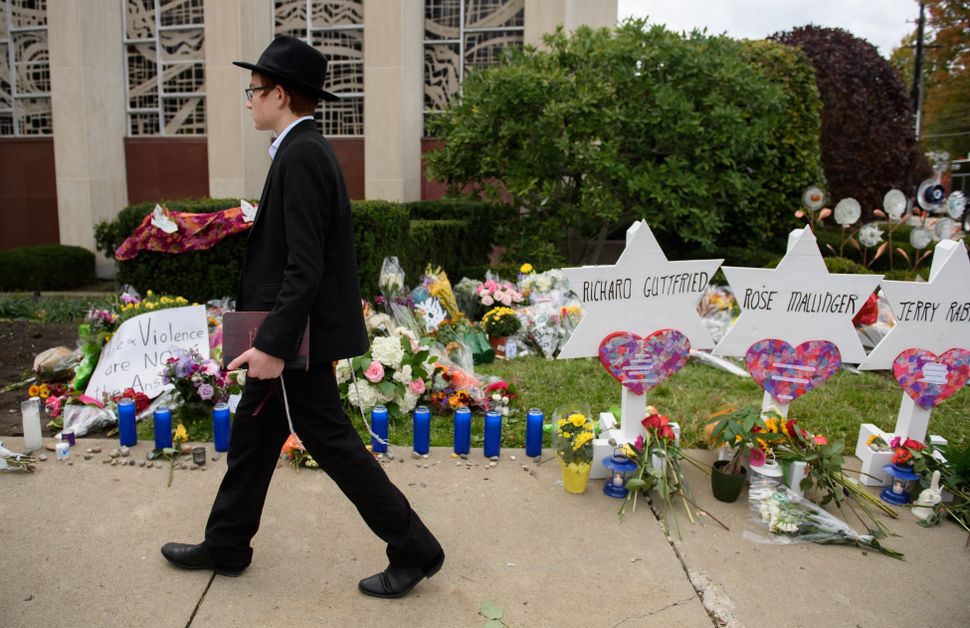 PITTSBURGH, PA – OCTOBER 29: An orthodox jewish schoolboy passes a memorial for victims of the mass shooting that killed 11 people and wounded 6 at the Tree Of Life Synagogue on October 29, 2018 in Pittsburgh, Pennsylvania. Eleven people were killed and six more wounded in the mass shooting that police say was fueled by antisemitism. (Photo by Jeff Swensen/Getty Images) Image by Getty Images

At a terribly disturbing time for American Jews, with the greatest anti-Semitic violence and incidents experienced by the community in decades and questions being raised about its fundamental security after deadly attacks in Pittsburgh, Poway, Jersey City and a brutal stabbing in Monsey, there is a piece of good news among the bad.

ADL recently completed its latest survey of the American people on the question of anti-Semitism and found, even as anti-Semitism is flourishing in terms of incidents, expressions and activity, that there has been no increase in anti-Semitic attitudes among the general public.

Using the methodology that it has been employing in such polls for nearly 60 years, a methodology created together with a group of University of California at Berkeley professors in the 1960s, ADL found that 11% of the American people harbor deeply entrenched anti-Semitic sentiments.

This number is consistent with the findings of a number of polls we have conducted over the last two decades, in which anti-Semitic attitudes in the United States ranged between 11 and 14%.

In light of this survey, how does one explain this disconnect between attitudes and behavior? If things are so horrendous on the behavioral side, why are they not so bad on the attitudinal side?

First to the numbers. When we find that 11-14% of the public have anti-Semitic attitudes, that translates into roughly 28 million adult Americans.

Clearly, carrying around stereotypes about Jews does not automatically mean that people will act on those stereotypes, particularly when it comes to violence. For years there did not exist an environment in this country where individuals seemed comfortable to act out their prejudice against Jews.

In recent years, however, that environment has changed dramatically, emboldening people to begin acting out on their hatreds.

A number of factors lie behind this changed environment. Social media has become a major source of communication, providing readily available platforms for those who spew hate and seek to ignite and radicalize others to act out their hate.

The political polarization in this country has created a climate where the other side is seen as the enemy, giving rise to the proliferation of conspiracy theories. Jews are often are the targets of these theories, which we saw in the alleged manifesto of the white supremacist Pittsburgh murderer.

The politicization of anti-Semitism has weakened the constraints on behavior. If it’s only the other side that’s responsible for anti-Semitism, then it opens the way for people to think that their side can’t be guilty of anti-Semitism and shouldn’t be blamed when anti-Semitic incidents appear from their ideological sector. We see this phenomenon particularly on the left.

Finally, though this is more relevant in Europe than here, but still of significance in the U.S., there is a loss of shame about anti-Semitism as fewer and fewer people have actually met Holocaust survivors.

When the first pictures of Auschwitz appeared after the war, there was a tremendous sense of shame that the hatred of Jews for centuries had resulted in the murder of the six million. This didn’t mean that people no longer harbored anti-Semitism, they surely did, but it inhibited their manifesting it in their behavior.

Now, 70 years later, and with new generations with little knowledge or connection to the Holocaust, as reflected in a new Pew study, that sense of shame about anti-Semitism has largely dissipated.

It also must be said that the ADL poll itself, despite the stable numbers, points to a connection between attitudes and behavior. Certain tropes about Jews which may influence extreme behavior received higher support than the overall 11%.

In the environment we described, these tropes can influence those inclined to anti-Semitism and even cause them to act out, given the right circumstances.

In the larger picture, attitudes are an important indicator of the state of anti-Semitism — but today hardly the main indicator.

Today, the surge in violence and incidents against Jews is by far the most significant element in assessing the state of anti-Semitism in America. It is what is making the community more uncertain about its security in America than in decades and is what is heightening the awareness, both in the community and in the broader society, that anti-Semitism in America is now a serious problem. It must be addressed for the sake of American Jews and for the well-being of American society.

Keeping in mind the overall positive findings of our poll, however, is important for perspective. It would suggest that if society can properly address the factors behind the distressing pattern of anti-Semitic behavior, no easy task, that there exists broader public sentiment that will be supportive of such a development.