Russia has killed more Syrian civilians than ISIS. Why are they getting away with it? 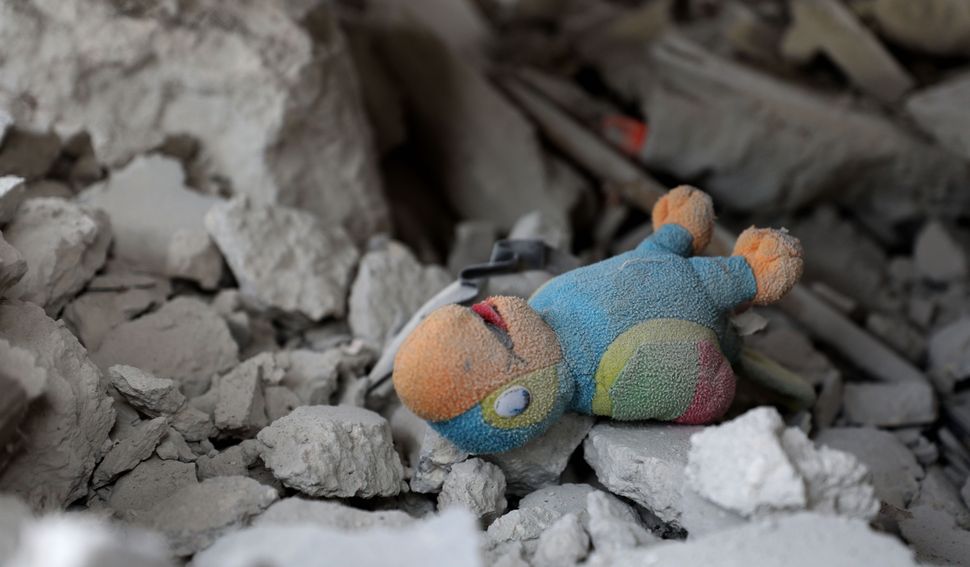 When Aaref Watad, a Syrian photographer, arrived at the scene of a recent Russian air force attack in western Aleppo, he found a car completely pierced by shrapnel and nine corpses. Four of them were children.

The bodies belonged to a family that had been fleeing Aleppo for the Turkish border along with thousands of other families attempting to escape intense Russian air strikes.

“The ground was covered in blood, body parts and some of the belongings of the family,” Watad told me. “We waited for their relatives to come pick them up for burial, but they had all fled.”

So the job of burying the family was left to neighbors, who had to move quickly because Russian jets were still in the skies bombing the area. Before placing one of the children in the grave, a neighbor lifted the corpse. “The child’s head was completely blown off by the blast,” Watad recalled. 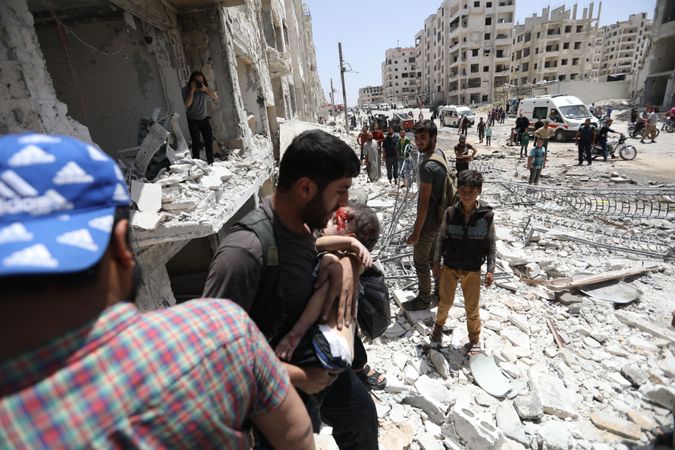 A man carries a wounded child out of a building following a car bomb explosion in the northern Syrian city of Idlib. Image by OMAR HAJ KADOUR/AFP via Getty Images

Russian bombs have killed more Syrian civilians than ISIS, according to data of the Syrian Network for Human Rights. Since September 2015, when Russia launched its direct intervention in the civil war, Russian jets have destroyed hospitals, ambulances and bakeries. Russia has been implicated in bombing UN convoys, a systematic campaign to destroy hospitals, and even the targeting of first responders. Russia has repeatedly dropped incendiary weapons and cluster munitions on densely populated besieged neighborhoods, burning people alive.

The ongoing offensive on Idlib, the last pocket held by the Syrian opposition in the northwest corner of the country, has precipitated a humanitarian crisis unprecedented in scale in the history of the blood-soaked civil war. Hundreds of thousands of civilians have been displaced from their homes since December 1, 2019, fleeing the advancing Syrian regime forces and militias under Russian and Iranian command.

These militias, responsible for the field-execution of civilians, the mutilation of corpses, beheadings and the desecration of graves and mosques, operate under Russian air cover. The Tiger Forces, known as Division 25, are a militia enjoying significant Russian support that have been implicated in the systematic use of chemical weapons.

Assad militiamen, who can not find civilians remaining in the towns they occupy, take out their aggression on the dead.pic.twitter.com/iveoo37AU2

Somehow, Russia, a UN Security Council member that portrays itself as a responsible superpower, has been able to get away with daily war crimes in Syria with impunity.

Russia’s intervention in the Syrian civil war had a number of goals. The most immediate one was preventing the fall of its only ally in the Arab world and home to Russia’s only overseas naval base, located in Tartous. But the intervention also aimed to reshape the international environment in favor of Moscow (and other undemocratic regimes) by undermining human rights norms, reducing U.S. influence in the Middle East and preventing another regime change of a despot, in this case Bashar al-Assad, through a popular uprising or armed rebellion.

Russia was largely successful in achieving these goals, despite its inferior economic and military power. And it succeeded by exploiting internal divisions in the West and the U.S.’s desire to reduce its involvement in the Middle East.

Russia saved the Assad regime from collapse by directly intervening in the Syrian civil war in September 2015. Its intervention reversed the tide of the war, together with increased support from foreign Shia militias dispatched to Syria by Iran from Lebanon, Iraq, Iran, Pakistan and Afghanistan.

#Syria: #IRGC Zaynabioun Brigade (made up of Pakistani fighters) lost many of its men past days during battles vs Rebels on S. #Aleppo front. Not officially acknowledged, but some of them pictured? pic.twitter.com/pDknSH1fX1

These forces, backed by the Russian air force, imposed crushing defeats on the opposition, forcing rebellious communities to surrender to the regime one after another. Those who refused to “reconcile” with Assad were bussed to Idlib, the holding pen for Syria’s “irreconcilables,” where the population gradually swelled to three million people, most of them children. Even prior to the ongoing offensive, most of the area’s population was displaced from their original homes.

Russia’s strategy has been brutal and effective, based to a large extent on lessons learned from the Second Chechen War. In both campaigns, Russia used indiscriminate fire to terrorize the population into submission and to convince rebels to switch sides once they realized defeat is near. Russia is pursuing a scorched earth policy, destroying Syrian towns and villages and depopulating them just as it destroyed Grozny, Chechnya’s capital. 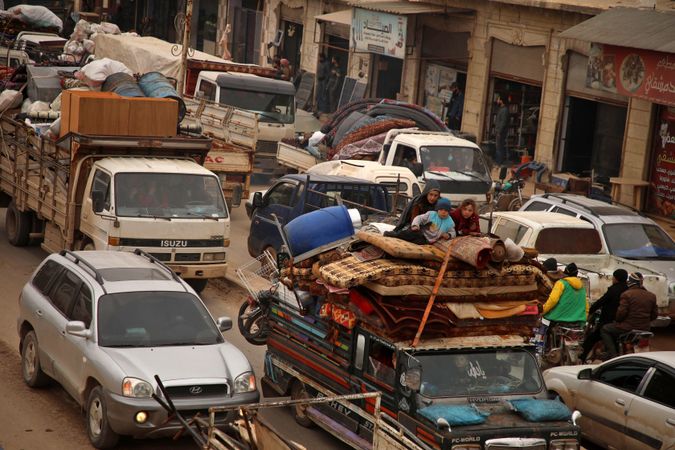 Displaced Syrian children sit in the back of a truck transporting their belongings as they pass through the town of Hazano in the northern countryside of Idlib, on February 4, 2020, fleeing northwards amid an ongoing regime offensive. - A Russian-backed Syrian government offensive against the country’s last rebel enclave of Idlib has displaced more than half a million people in two months, according to the United Nations. The wave of displacement, which coincides with a biting winter, is one of the largest since the start of the Syrian war nearly nine years ago. (Photo by AAREF WATAD / AFP) (Photo by AAREF WATAD/AFP via Getty Images) Image by Getty Images

And while it has systematically destroyed Syria, Russia has proven unable to assist in rebuilding it. It simply does not have the funds. The sums required for Syria’s reconstruction are far beyond Russia’s capacity, and Assad’s other backer, Iran, is suffering from even greater economic malaise. While profitable construction projects in central locations were awarded to Assad regime cronies, Syria is in need of donor funds to reconstruct its housing stock and public infrastructure. Western and Arab donors are unlikely to fill in the gap due to a refusal to finance reconstruction under an intransigent Assad regime, and the fear of a secondary U.S. sanctions; in December 2019, the U.S. congress passed the Caesar Act, which places sanctions on any company engaging in reconstruction in Syria as long as the regime refuses to institute political reforms.

Russia also appears unable to compel the regime to institute any real political reforms. Russian officials have marketed themselves to the West as useful interlocutors with the Assad regime, while at the same time justifying their inability to alter the behavior of the regime on most issues that matter to the West, like halting the use of chemical weapons and the mass extermination of detainees and the arrest of returning refugees.

Indeed, Russian influence appears limited, hamstrung by the Assad regime’s ability to play its two allies — Iran and Russia — off of each other. The regime can feel confident that Iran will remain by its side even if Russia threatens to pull its support due to the regime’s intransigence.

Russia’s track record in Syria has shown that it can only facilitate the delivery of concessions from Assad when the regime is threatened with the use of force, a fact made clear in the 2013 chemical weapons deal, in which the Assad regime handed over most (but not all) of its chemical weapons stockpiles when faced with the imminent threat of U.S. airstrikes. This threat came about after the regime crossed President Obama’s “red line” and gassed over 1,400 people to death with Sarin in the rebel-held suburbs of Damascus in August 2013. 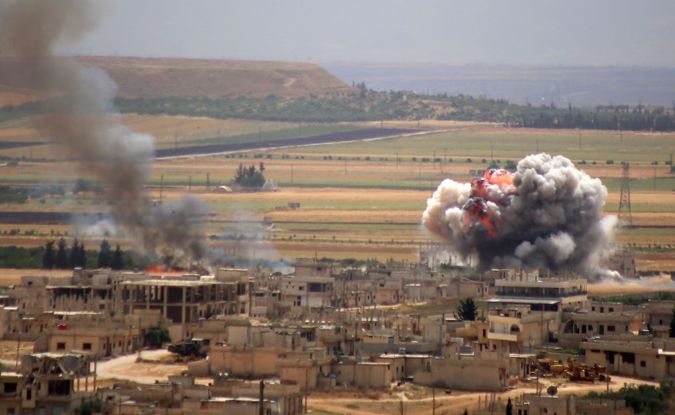 Smoke and fire rise following reported Syrian government forces’ bombardment on the town of Khan Sheikhun in the southern countryside of the jihadist-held Idlib province. Image by ANAS AL-DYAB/AFP via Getty Images

On an issue that matters a great deal to the U.S. administration and Israel — Iran’s presence in Syria — Russia’s track-record is mixed. Russia’s own competition with Iran over influence in Syria coupled with U.S. requests prompted Russia to pressure Assad to scuttle or delay the implementation of a number of major deals reached with Tehran.

Russia has been much less successful in thwarting Iran’s military entrenchment in Syria. Despite a deal reached with Israel, Russia has not been able to remove pro-Iranian militias from southern Syria. Iran continues to build bases across Syria and dispatch foreign Shia fighters to its battlefields. Increasingly, Iran is recruiting locals into its militias and attempting to win popular support among Syria’s impoverished and desperate Sunni communities in areas under the effective control of its militias.

Meanwhile, Russia gets away with war crimes every day.

The U.S. and several other countries have passed the Global Magnitsky Act and laws similar to it, which are intended to penalize state officials responsible for human rights abuses. These laws should be applied to the commanders overseeing Russia’s intervention in the Syrian civil war. This will serve to push back against the erosion of human rights norms we have witnessed over the past decade and spotlight Russia’s central role as a perpetrator of atrocities in Syria.

But recognizing Russia’s limited ability to influence the regime under the current circumstances and punishing Russia’s human rights violations in Syria should not preclude engaging. At the end of the day, Russia is a major player in Syria and the only one with a modicum of influence over the regime who is willing to engage the West (unlike Iran). 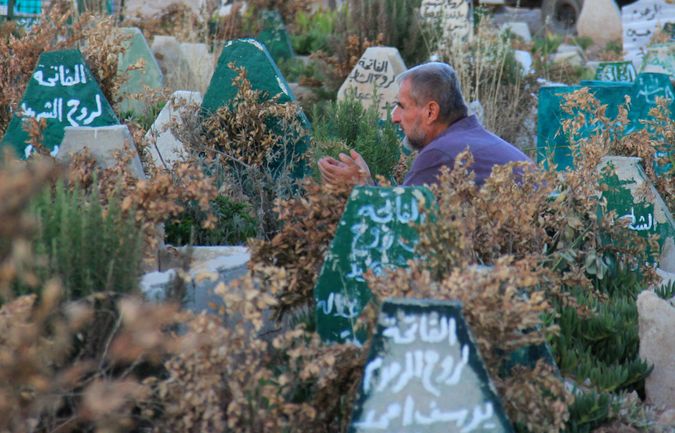 A Syrian man prays at a cemetary in Khan Sheikhun, a rebel-held town in the Syrian Idlib province. Image by OMAR HAJ KADOUR/AFP via Getty Images

In fact, these sanctions on Russia, in addition to the Caesar Act, may compel Russia to engage more seriously in the ongoing talks with the Trump administration concerning Syria’s future. With greater leverage, the U.S. can offer that in exchange for lifting sanctions from both Russia and the regime, the regime will offer concessions on issues that matter to the West. One top priority should be reforming Syria’s notorious repressive apparatus, the beating heart of the regime. Without such reforms, no Syrian is safe to live in or return to the country.

Russia has played a pivotal role in undermining human rights norms over the past decade, by backing the Assad regime and other dictators and shielding them from any repercussions at the UN.

Russia’s role in undermining democracy, including in the United States, has garnered public attention and condemnation. It’s time to put Russia on the spot for the much graver abuses it is perpetrating in Syria.

Russia has killed more Syrian civilians than ISIS. Why are they getting away with it?