I had never been in the same room as a person who has defended genocide until Sunday afternoon at the American Israel Public Affairs Committee policy conference. Words like apartheid and genocide and ethnic cleansing are often thrown around in the context of the Israeli-Palestinian conflict, much to the chagrin of Israeli Jews and their defenders. But it wasn’t a defender of Israeli war crimes, real or imagined, who was hosted by AIPAC. It was someone from a different context entirely.

In July of 1995, 8,000 Muslims were murdered in Srebrenica in what the International Criminal Tribunal for the former Yugoslavia deemed a genocide. Under the command of Ratko Mladić, a Serbian paramilitary unit killed thousands and thousands of men and boys. Some were burned alive, many buried in mass graves. Thousands of Muslim women and girls were raped and tortured. It was the worst crime on European soil since World War II.

At the time, a man named Aleksandar Vučić was serving as the minister of information. He imposed fines for journalists who opposed the government, and banned foreign television networks. The Serbian media he oversaw was accused of justifying atrocities and demonizing ethnic minorities. And then he went on to justify them himself.

Just days after the Srebrenica massacre, Vučić declared in the National Assembly, “You kill one Serb and we will kill 100 Muslims.”

In the quarter century since the Bosnian War, and as many of the men he served with and under have been prosecuted for war crimes, Mr. Vučić has reinvented himself. He left the ultranationalist Serbian Radical Party in 2008, co-founded a populist conservative party, and has been serving as the President of Serbia since 2017. And while he’s admitted what he calls his “political mistakes,” he continues to insist that his words were “taken out of context” and remains agnostic on whether or not a genocide took place under the government he served.

Serbia’s Muslim population seems not to have forgiven him; Vučić was pelted with rocks at a commemoration for Srebrenica in 2015. But forgiveness has come from an unusual place: AIPAC. (AIPAC did not respond to requests for comment about Vučić.)

On Sunday evening, at the pro-Israel lobby’s annual confab, the Serbian President was welcomed onto the stage to address 18,000 conferencegoers.

AIPAC has long been accused of sliding to the right, ignoring the plight of the Palestinians and the two-state solution in favor of Israeli Prime Minister Benjamin Netanyahu’s warm, right-wing embrace. Sometimes, the group’s leadership even seems to unconsciously surrender to the criticism, as in a recent tweet lauding AIPAC’s attendees as “Americans of all stripes” which included Jews and Christians but notably not Muslims.

Most recently, it was Sen. Bernie Sanders of Vermont, the suddenly front-running Democratic presidential candidate, who took up the criticism of AIPAC. After initially telling an activist that he “had no objection to going” to the policy conference, Sanders seemed to capitulate to extremist views in his campaign and reversed course last week, announcing via Twitter not only that he would skip the conference, but that it was something of a boycott. “I remain concerned about the platform AIPAC provides for leaders who express bigotry and oppose basic Palestinian rights,” Sanders tweeted. “For that reason I will not attend their conference.”

The response from AIPAC was fierce, as well as from other Jewish leaders who said that Sanders was intentionally trolling, and needn’t have gone out of his way to stick it to American Jews who feel represented by AIPAC. Most of the other candidates are also skipping the conference due to Super Tuesday, a perfectly reasonable excuse (former Vice President Joe Biden and Sen. Amy Klobuchar of Minnesota spoke via video on Sunday; former New York City Mayor Mike Bloomberg is scheduled to be in the flesh on Monday).

Others, like the Editor-in-Chief of the Forward, Jodi Rudoren, argued persuasively that Sanders should have attended the conference and spoken his truth.

But two days after Sanders’ denouncement, AIPAC seemed determined to prove him right, tweeting about Vučić’s attendance with the hashtag they’d developed in response to Sanders: #AIPACProud.

Why is a man who still hasn’t apologized for a Muslim genocide that he justified on AIPAC’s platform? In what universe does this amount to strengthening a bipartisan U.S.-Israel relationship? How does AIPAC proving Sanders’ petulance right assist American Jews trying to find themselves represented in an increasingly polarized political atmosphere?

Most of Vučić’s comments on the AIPAC stage were anodyne enough. He spoke of a Holocaust restitution bill he’d supported, and of marking the 75th anniversary of the liberation of Auschwitz, and committed to opening an “official state office in Jerusalem with the Serbian official flag.” One had to wonder: For this mess of pottage AIPAC sold out American Jews? 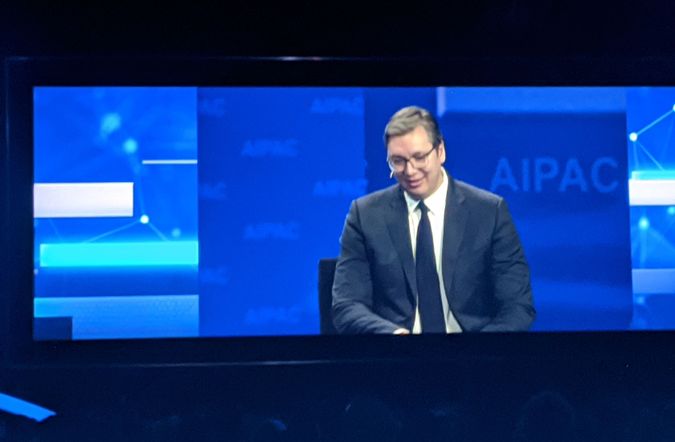 But not all of his comments were banal. “There are many things that you can define as a common denominator for Serbs and Jews,” Vučić said. “We have always been together throughout history,” he went on, making Serbia an exception to everyone else who comes to AIPAC who “want to flatter you in a way to get a sort of political, economical support.”

Beyond the insinuation that AIPAC provides political and economic support to struggling countries, Vučić’s claim that Serbs and Jews are in this together — with his history when it comes to Muslims — was an appalling thing for AIPAC to have provided a stage for. In allowing Vučić to compare Jews to himself and his ilk, stained with genocide denial, AIPAC provided the far left with fodder for their own pernicious claims comparing Israel to white supremacists committing genocide against Muslims.

When you’re the lobby that defends a strong U.S.-relationship with a country that has a legitimate problem guaranteeing the civil rights of its Muslim minority, the last person on your stage should be a person with a history of defending a Muslim genocide.

In response to Sanders’ announcement that he would be boycotting the policy conference, AIPAC accused him of “insulting his very own colleagues and the millions of Americans who stand with Israel.” Perhaps he did. But so did AIPAC.

Batya Ungar-Sargon is the opinion editor of the Forward. She can be reached at batya@forward.com. Follow her on Twitter @bungarsargon.