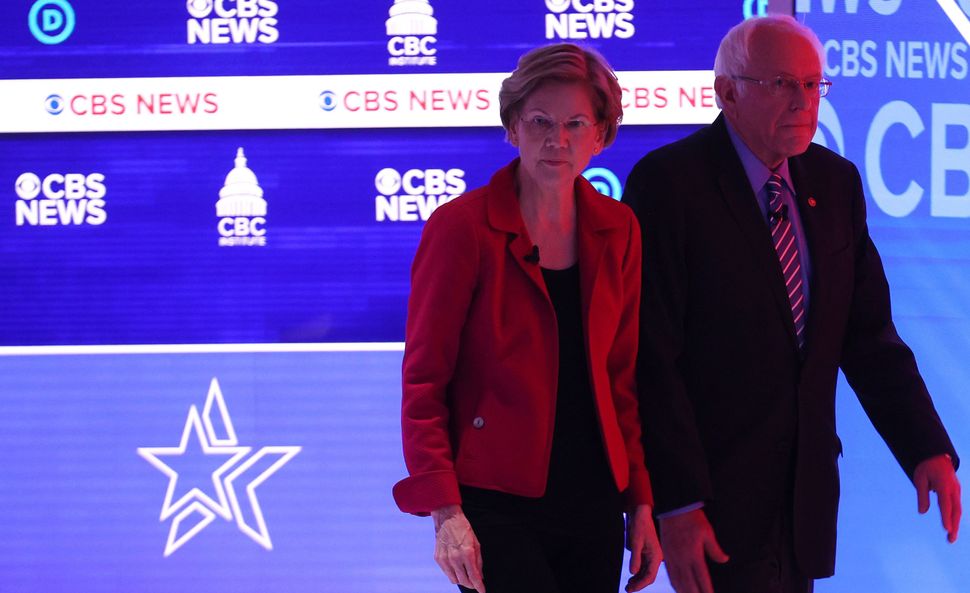 On Thursday, Elizabeth Warren ended her campaign for the Democratic presidential nomination. Warren’s departure not only finalized the narrowing of a historically large and diverse primary field down to two; it represented the closing of one possible path for the party to take following its 2016 disaster, with Sanders and Biden giving voters a stark choice between a dramatic new direction and the status quo.

Defeated, leaderless, and adrift, the Democratic Party after 2016 faced major questions about its future. Could the “Obama-Trump” voters be won back, and if so, how? Or did the future lie in the increasingly diverse suburbs of the nation’s major metro areas? What policies and priorities should be revisited? Would a different standard-bearer have won? While there was no institutional reckoning equivalent to the famous (and famously ignored) Republican National Committee “autopsy” of the 2012 race, there was a sudden burst of grassroots activity that party leaders had no choice but to follow. The Women’s Marches brought out unprecedented crowds in cities around the country, the travel-ban protests at airports forced a revision and delay in the policy, and a wave of local organizing paved the way for state and congressional rebounds in 2017 and 2018.

This ferment in the party ranks was echoed in the primary field as the 2020 campaign got underway. Candidates ran not just on competing agendas and personas but on competing visions of the party’s path out of the wilderness. Even the most after of afterthoughts in the field made interesting cases. Steve Bullock, the popular governor of Montana, pushed a revival of attention to Western red states. Jay Inslee, governor of Washington, made a singular focus on climate change as an existential threat the center of his campaign. Marianne Williamson talked about spirituality and Andrew Yang talked about the transformative effects of technology.

But as the field shrank and the voting started, three clearly-articulated versions of a Democratic revival stood out:

Warren focused a big policy agenda—she famously had “a plan for that”—on the economic and governance challenges that predated the Trump years but had become especially urgent: public corruption, the growth of monopolies, and the fractal-like explosion in wealth inequality.

Bernie Sanders resumed his 2016 campaign (often buoyed by the online refrain “Bernie would have won”) to transform the Democratic Party into an ideologically left-wing movement rooted in working-class economic interests and a major rethinking of American foreign policy.

And entering late with a staggering budget, Michael Bloomberg proposed a center-right technocratic buy-out of the party as a whole.

Each of these proposals for a different kind of Democratic Party gained traction with parts of the electorate and party leaders. But as voting began, each found its limits. The Sanders campaign worked hard to build a more diverse coalition than he had in 2016, with some success, but his hoped-for surge in youth and liberal voters hasn’t materialized and he struggled to reach beyond them (starting out his post-Nevada week as frontrunner with qualified praise of Fidel Castro’s record on literacy did not, apparently, help). Warren united younger and older college- and graduate-educated Democrats but found little support among non-college voters and voters of color. Bloomberg, who skipped the first four states altogether, had resources to open a lot of doors with state and local party leaders but couldn’t overcome rank-and-file skepticism (going to a debate where he got ethered by Warren did not help).

Then came South Carolina, and three days later, Super Tuesday. And in the course of a very few days, a new frontrunner emerged in Joe Biden. Critical endorsements and big turnouts from African American, older, and independent voters pushed Biden way over the top in South Carolina. A previously fractured “moderate lane” quickly consolidated around the former vice president, allowing him to win in states his very recently ailing campaign hadn’t even contested.

In a matter of days a fourth proposal for the future of the Democratic Party had gotten a major boost: do nothing.

It’s not hard to see how this happened. Unlike Warren and Sanders, Biden doesn’t threaten the health care and finance industries that are indispensable to funding Democratic campaigns. He enjoys very strong support among African-American voters, reaching parity with Sanders among younger African-American voters in South Carolina and winning older African American voters overwhelmingly there and across Super Tuesday states. He has credibility with the older and non-college white voters other candidates struggled to reach. His partisan bona fides set him apart from Bloomberg. He’s closely identified with a much-loved former president and tests well against Trump in polls.

In a field of factions, Biden was both a known quantity and the closest thing to a unifying force. Everyone may not love Joe, but it looks like everyone hates someone else more than him.

The nominating contest is far from over. Sanders has a base of support that can keep him competing for a long time. Biden’s liabilities haven’t gone away and his momentum may well slow or reverse, as it already has once during this campaign. But in the rush of party leaders—and a whole lot of primary voters—to coalesce around Biden, there seemed to be little reflection on what it would mean to return to a quintessential establishment figure with a modest, orthodox platform and a message geared at winning unhappy Republicans. Hillary Clinton lost doing exactly that.

Of course it’s possible that Biden will benefit from not being a woman, that his campaign may find a way to bring back youth and Latino turnout from its 2016 slump, and that right-leaning independents may be more resolutely opposed to Trump now than they were when he was a candidate. It’s easy to forget how narrow and flukish Clinton’s loss was, and how many individual factors could have been decisive. Maybe, for Democrats, this time will be different.

But change cuts both ways. A Trump re-election probably won’t trigger another women’s march, mass immigration protest, or grassroots suburban realignment. It’s been a long road to a second chance, and there may not be a third.