Dear Senator Warren: Here’s what your candidacy meant to me 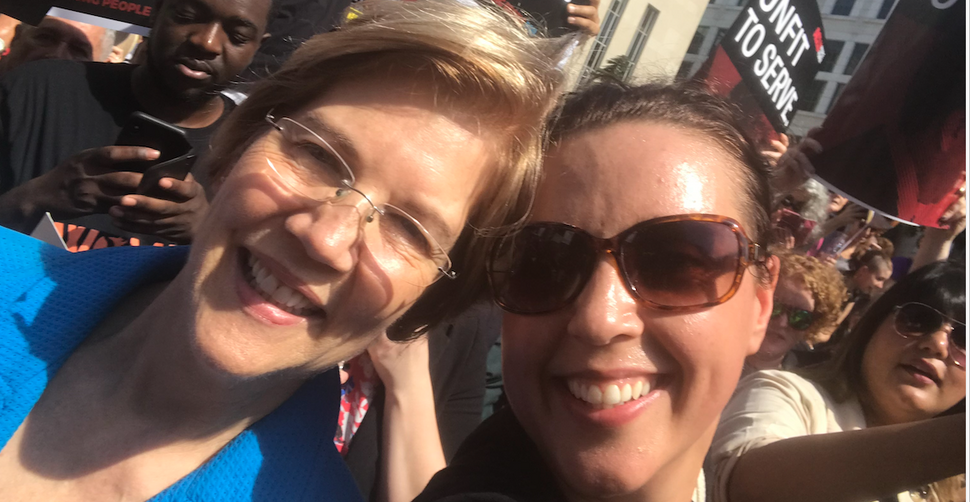 Image by Senator Elizabeth Warren with the author Tae Phoenix

I first met you in September of 2018, at a rally in Washington, DC. You had come to speak to the women — most of us survivors of rape and sexual assault — who had spent the last several months being arrested, taunted, and talked down to as we fought tooth and nail to keep yet another serial sexual predator off the Supreme Court.

I was lucky enough to be onstage as Tamika Mallory introduced you. She said you were an advocate for Black women, with a keen intersectional analysis of the problems we face. While you were speaking, I watched over your shoulder as that crowd of survivors practically climbed on top of one another just to get closer to you.

Needless to say, you got my attention.

My husband spent the bulk of 2019 doing sporadic consulting gigs while we counted the days until our COBRA ran out. I have multiple disabilities that are exacerbated by a 9-5 office environment, so his income is our day-to-day. We’re pretty well-off relative to what many people are going through, but we were burning through our savings at a rate that made both of us queasy.

Regardless, we found $50 to give to your campaign every month. We saw the intersectional analysis Tamika credited you with in every one of your plans. We believed that analysis meant you could unite Democrats in a way that neither Sanders nor Clinton was capable of in 2016.

That was before the most diverse field of candidates in our country’s history dwindled to you, Senator Klobuchar, and a bunch of white men. That was before news networks erased you from their polling, gave you less time to speak in debates, and cut away from your speeches to give airtime to male commentators. That was before the vicious harassment and intimidation of women who spoke up for you online.

That was before I made call after call for you, only to hear voters say some version of, “I love her plans but I don’t think a woman can win.”

I will believe to my dying day that if everyone who felt that way had voted for you, we’d be looking at a different landscape today.

Of the remaining choices, I prefer Sanders, because I’m delighted to see a fellow Jewish progressive building a powerful working people’s movement with many organizers I consider friends. But I hate the way he uncritically accepted the benefit of the toxic misogyny that scuttled your campaign.

I respect the Black Southern voters who have clearly stated their preference for Vice President Biden, but I’m concerned about his record of touching women inappropriately and his desire to take us back to the way things were rather than moving us forward.

Nevertheless, I will persist. I plan to fly to my dad’s home state of Pennsylvania in October and knock on doors with him for whoever gets the Democratic nomination. But until Democrats decide on which old white man they want, I’m going to focus on other priorities.

I was in Washington, DC for five weeks earlier this year doing musical civil disobedience and holding Senate Republicans accountable with the Swarm the Senate movement. I had a front row seat to their pathetic display of sycophancy and cowardice. I emerged from that fight more convinced than ever that we must flip the Senate this November.

And so my husband and I have divided up our $50/month contribution to your campaign and shifted it to Democratic candidates in five key Senate races. I am calling on every one of your supporters to do the same. Trump’s sham acquittal was reason enough, but today has steeled my resolve to flip the Senate because I want to see you vested with the power to enact every single one of your plans — as our new Senate Majority Leader.

And if Democrats actually manage to secure the White House, I’m looking forward to watching as your plans become bills, moving across the Resolute Desk with lightning speed, enacting big structural change that will hasten the day when a woman’s hand, preferably one with dark skin, wields that pen.

The last time I saw you, I was with a crowd of protesters outside of the Senate after the vote to acquit President Trump. We raised our voices, chanting “shame, shame, shame” as Republican after Republican silently sped into the night. Sometimes, the light at the intersection of Delaware and Constitution would turn red and the traffic would back up, giving us a chance to really lay into someone. We were taking that opportunity when the back window of the car we were yelling at rolled down and there you were.

A cry of delight went up from the crowd, followed by a flurry of apologies. You waved them off.

“It is shameful,” you said. “And I don’t take it personally.”

You could just as easily have been talking about the outcome of this primary.

Thank you for being in this fight. I’ll be right beside you. Always.

PS: Please give Bailey a scratch behind the ears and tell him, from me, that he is a Very Good Boy.

Tae Phoenix is a singer-songwriter who uses music as a community organizing tool. She works with the Washington Poor People’s Campaign, Seattle Indivisible, and the Women’s March among others. Follow her on Twitter @taephoenix.

Dear Senator Warren: Here’s what your candidacy meant to me