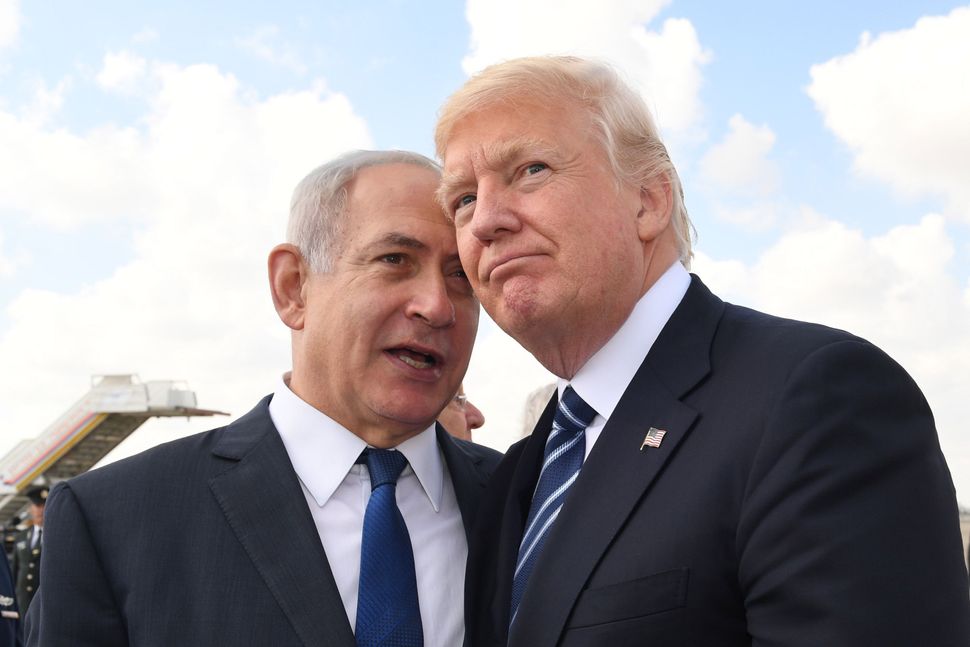 Israeli Prime Minister Benjamin Netanyahu speaks with US President Donald Trump prior to the President’s departure from Ben Gurion International Airport in Tel Aviv on May 23, 2017 in Jerusalem, Israel. Trump arrived for a 28-hour visit to Israel and the Palestinian Authority areas on his first foreign trip since taking office in January. (Photo by Kobi Gideon/GPO via Getty Images) Image by Getty Images

It appears Israel’s rash decision to mandate a 14-day quarantine for everyone entering the country — effectively barring anyone who can’t guarantee they have a place to hunker down for two weeks — was not based entirely on public health considerations related to the global outbreak of coronavirus.

According to reports in the Israeli press, Vice President Mike Pence warned Netanyahu in a phone call on Sunday that the Trump administration would look unfavorably upon a decision to name the U.S. as a place whose visitors to Israel would require quarantine.

So, to placate Trump, Netanyahu picked the most extreme option on the table, quarantining everyone.

It was a decision infected by politics, specifically the toxic and narcissistic strand one is in great danger of contracting by tying their fortunes to the abnormal administration in Washington. Prime Minister Benjamin Netanyahu has once again decided to keep Trump’s ego pacified, regardless of the consequences.

It is not in either country’s best interests to operate this way — especially now. Israel, like many nations in the region and the world, is confronting a serious epidemic, the policy implications of which should not be trivialized. There is no doubt that difficult decisions will need to be made, some that will have a negative impact on any major country that isn’t a complete autarky.

On the same day Israel announced its measures, Italy expanded already-stringent restrictions on movement. The southern European nation has seen the highest death toll from coronavirus, also known as COVID-19, outside of China. Still, according to The New York Times, the Italian prime minister “suggested that foreigners could still come to Italy.”

The capricious nature of responding to a crisis like the spread of coronavirus is why purely political factors should not play a role in determining the measures that should be taken. Populations, especially in democratic societies accustomed to freedom of movement, need to trust that these decisions are being made with good judgment and are actually necessary.

As of now, it’s not clear that Israel’s decision to seal itself in this fashion was made in good judgment or was necessary. In fact, reporting suggests a more limited and finely targeted approach was jettisoned in favor of a dragnet so as not to offend Washington and the volatile president, who is rightly receiving harsh criticism at home for downplaying the potential harm to Americans from coronavirus.

Until yesterday’s announcement, Israel had been implementing a more limited policy. Last week it barred tourists from Germany, France, Austria, Spain and Switzerland (Israeli citizens returning from these places were required to enter quarantine). These are all friends of Israel led by presidents and prime ministers who take a rational and not personal approach to foreign relations.

And yet, earlier this week, when it seemed that several states in the U.S. — or perhaps the entire country — would need to be added to the list, Pence warned Israel not to “single out” the U.S.

It wouldn’t be the first time Trump’s mercurial temperament superseded the national interests in Netanyahu’s calculation.

Last summer, in response to an irate tweet from President Trump, Israel reversed its decision to allow two Muslim U.S. Congresswomen Ilhan Omar and Rashida Tlaib, from entering the country. This sparked a backlash from Democrats and other friends of Israel who would ordinarily be quite critical of Omar and Tlaib.

The economic price Israel will pay for this decision is almost incalculably steep. For at least the next two weeks, individuals and businesses in the country substantially dependent on tourists will suffer even greater harm than they already expected. The president of Israel’s hotel trade association has warned of mass layoffs as people cancel their travel plans to the country en masse.

Extreme measures are sometimes necessary in the face of crisis, and it’s possible the decision to enact worldwide restrictions will prove prescient. The evidence, however, suggests the scope of Israel’s response to the coronavirus outbreak was distorted by a factor — a man’s ego — that should never have come into play.

In November, Americans should consider the risks of reelecting a leader who is incapable of acknowledging a global emergency and allowing allies to protect themselves. Israelis, for their part, may have to live with a leader who capitulates so easily to such a man.