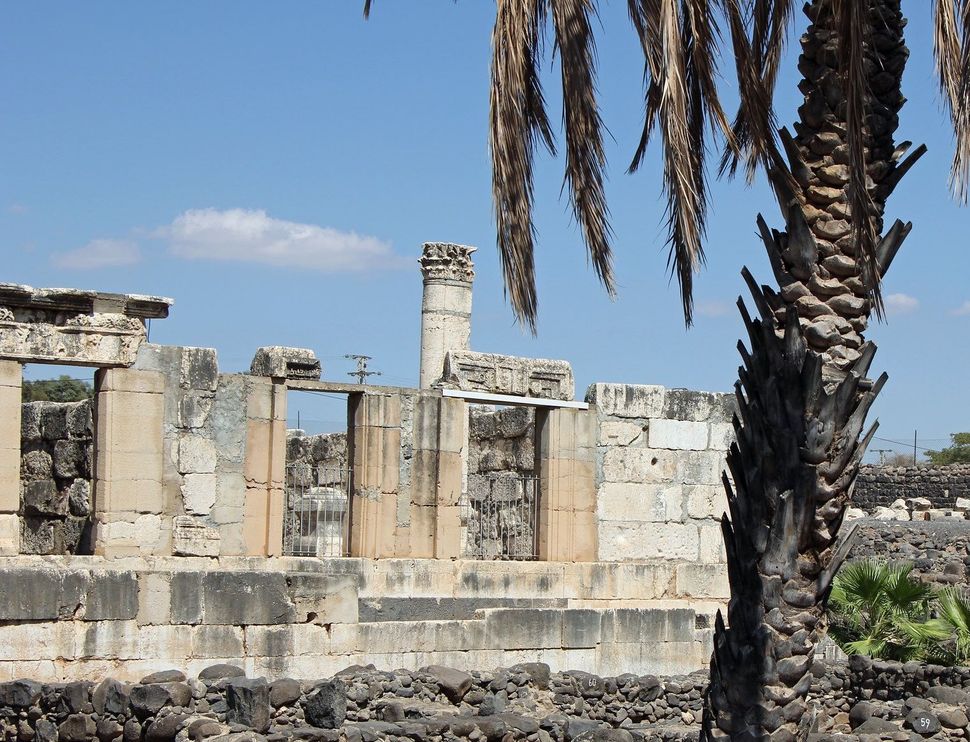 Ruins of the white Synagogue in Capernaum Image by Eduard Marmet

If you attended religious school, you’ve probably heard this story: It was the first century of the Common Era. The Romans had destroyed Jerusalem, and with it, Judean independence. In utter despair, the Jews smuggled their leader, Yochanan ben Zakkai, out of Jerusalem in a coffin. He leaped out of the coffin, and hailed the Roman general, Vespasian, as the new emperor of Rome.

What seemed like monumental chutzpah turned out to be prophetic: Moments later, a messenger arrived on horseback. He told the general that the emperor had died, and that the general was to take his place.

Grateful to Yochanan, the general-cum-emperor asked, “What can I give you as a reward?”

Yochanan famously replied, “Give me Yavneh and its sages.”

The rabbis traveled to the coastal city of Yavneh, where they recreated Judaism. The temple was gone, and along with it, the sacrifices, so they relocated Judaism in the home and the synagogue. Judaism’s religious language became prayer, Torah study, and mitzvot. The Pesach sacrifices became the home-based seder, and the daily sacrifices became the Amidah, the classic statement of Jewish prayer. The rabbis finalized the authoritative canon of the Hebrew Bible, and re-established the Sanhedrin.

Now, 2,000 years later, American Judaism is having its “Yavneh moment.” We are experiencing a transformation perhaps as deep and as pervasive as that moment when the ancient temple gave way to the synagogue. Those transformations have been coming for decades; now, they are fully upon us.

Like the rabbis in Yavneh, we are renegotiating where Judaism happens. Just as the loss of Jewish sovereignty moved the sanctity of Jewish practice to the Jewish home — to the Jewish table, the symbolic remnant of the ancient altar — and to the synagogue, the coronavirus crisis has, at least temporarily, “moved” Judaism out of synagogues. We are now in cyber-Yavneh: Across the United States and beyond, synagogues are temporarily closing, moving their core operations — services, classes — to Facebook, Zoom, and other platforms. Many synagogues have done this without missing a beat, proving their resilience, and with it, their relevance. Judaism is (temporarily) not in the synagogues. Judaism is now in the cloud — which, let the record note, is a biblical euphemism for God.

And it’s resulted in an explosion of participation. Last Friday evening, we moved our services to Facebook. We had 223 people “attend” our service — up from about forty worshipers who used to show up in person. The next morning, 682 people studied Torah with us online — up from our usual twenty students. For Shabbat morning services, a Reform synagogue that manages to eke out a minyan wound up having 150 people at worship. The next morning, our Sunday school jumped to 350 students. (Thank you, Mark Zuckerberg.)

Here’s the thing, though: The vast majority of our participants were not members of our synagogue, or, most likely, of any synagogue. For years, we have been engaged in a whole conversation about synagogue membership, what constitutes synagogue membership, whether “member” is even the right term. For years, some have said that we should be counting the number of people who cross our thresholds, not the number that pay dues. Perhaps, they said, we should be counting the number of souls that we touch, not the number of checks we receive.

Likewise, for years I wondered aloud whether our technology destroying our sense of community, or merely re-shaping it. Coronavirus answered loud and clear: It now turns out that the past thirty years, phones, tablets, laptops, instant messaging, Facebook, Twitter, and Zoom was a test to see how we can use these tools to adapt ourselves to a moment of crisis. We passed the test.

And in so doing, we’re redefining Jewish people. Last Shabbat, I looked carefully at the names and locations of our Facebook flock. Many were gentiles: Christians, Muslims, a few Buddhists from South Korea, even several Sikhs. It turns out that there is an international and inter-religious market for Judaism, a Judaism without defensiveness or apology — the real deal, as we teach it.

What I learned was that unlike synagogues and classrooms, which have doors and walls, the cyber shul does not. In the words of the Passover Haggadah: “Let all who are hungry, come and eat!” That is precisely what has happened, not only to me, but to many of my colleagues. Judaism just became more relevant than we could have ever imagined — and to more people.

This pandemic will pass. The question is, on the day after, what will Judaism look like? It might well be that we have discovered the new Jewish normal.