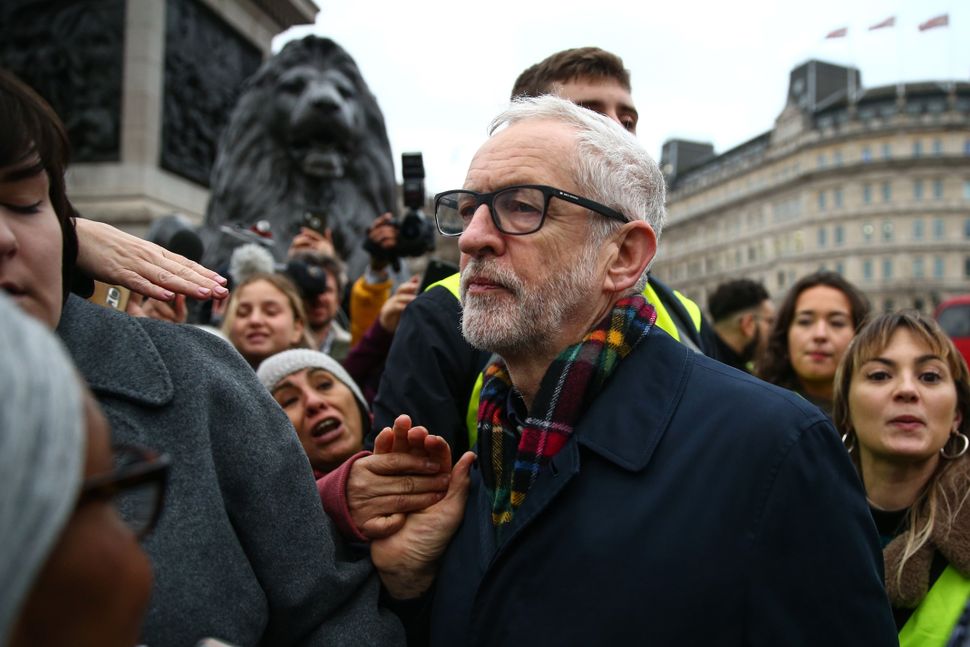 JANUARY 11: Jeremy Corbyn leaves Trafalgar Sq after speaking at a rally on January 11, 2020 in London, England. Saturday’s demonstration was co-organized by the Campaign For Nuclear Disarmament and the Stop the War Coalition, an activist group formed in 2001. (Photo by Hollie Adams/Getty Images) Image by Getty Images

The dream that its new leader Keir Starmer would bring unity to the British Labour Party lasted all of a week. Over the weekend, an internal report authored during the final months of Jeremy Corbyn’s leadership on the party’s response to its years-long anti-Semitism crisis was leaked.

The document was intended for the Equality and Human Rights Commission, which is currently investigating allegations of anti-Semitism inside Labour. But in what constitutes a massive potential data breach, a report that names not only suspected anti-Semites but those who bravely reported them to the relevant authorities has ended up in the hands of the British press — including Corbyn’s outriders on social media.

Thus does Labour return to a state of vicious factional in-fighting — a struggle whose victims are once more the party’s Jewish members and those who oppose anti-Semitism. In a statement, Euan Phillips, a spokesperson for Labour Against Antisemitism, said that its volunteers named in the report have had their personal details uploaded onto neo-Nazi websites, placing them in “significant danger.” “It is our intention to strenuously pursue this matter using the full force of the law,” Phillips confirmed.

LAAS Update on “Flagrant” Labour Party Data Breach:
“It is our intention to strenuously pursue this matter using the full force of the law.”#LabourAntisemitism@UKLabour @Keir_Starmer
– Full statement https://t.co/7z4AL4wm5l pic.twitter.com/7LUwsj8v5G

It is in the spirit of factionalism that this report seems to have been written. It doesn’t dispute that there was an anti-Semitism problem. But in stark contrast to the conclusions reached by the Jewish Labour Movement in December — that Corbyn “sympathized with and engaged in anti-Semitism” and his leadership team covered up the extent of the problem — the report’s authors absolve Corbyn and his allies of any and all responsibility for it.

The report shifts blame away from the leadership office and onto Labour Party Headquarters and its Governance and Legal Unit responsible for dealing with anti-Semitism cases — as if all three were not part of the same political party.

“Prior to March 2018, LOTO… had little to no oversight over the disciplinary process,” it states, while the Governance and Legal Unit and its “bureaucratic drift and inertia” “failed to act on the vast majority of complaints received,” running an anti-Semitism complaints system that “simply did not function.”

The report directly names and blames the Governance and Legal Unit’s managers, some of whom were whistleblowers in a BBC investigation into Labour’s failure to root out anti-Semitism. Labour Party Headquarters, meanwhile, was beset by a “hyper-factional atmosphere,” the report argues, which is nothing if not the pot calling the kettle black.

Labour staff “were bitterly opposed to [Corbyn], and seem to have been demotivated, or largely interested in work that could advance a factional agenda.” Some employees “seem to have taken a view that the worse things got for Labour the happier they would be, since this might expedite Corbyn’s departure from office.” It was only after Corbyn associate Jennie Formby took over as Labour’s general secretary in April 2018 that Labour’s handling of anti-Semitism accusations improved and reforms instituted.

All this reads like nothing more than old-fashioned score-settling. It does nothing to get to the heart of Labour’s anti-Semitism problem. And parts seem wholly disconnected from reality. “This report thoroughly disproves any suggestion that anti-Semitism is not a problem in the Party, or that it is all a ‘smear’ or a ‘witch-hunt,’” it claims, when as the anti-Semitism researcher Dave Rich has noted, it was Corbyn’s allies who spent years arguing the crisis was a fabrication. “It’s a smear to say that Labour has a problem with anti-Semitism. It is something like a smear against ordinary party members,” said none other than Diane Abbott, Corbyn’s shadow home secretary and comrade-in-arms for decades.

There are four pages on “denialism” and 15 pages on Corbyn’s statements opposing antisemitism. But no room for the examples of Corbyn and his closest supporters encouraging that denialism in the first place /9 pic.twitter.com/9viuC5h63I

Corbyn’s supporters believe he and his leadership have somehow been vindicated by this leak, talking about an “active conspiracy” within the party and going so far as to make the bombastic, ludicrous, and fundamentally unserious comparison to Watergate

A senior group of Labour staffers actively conspired for the party to lose the 2017 election. That’s the headline allegation from the leaked Labour HQ report … this is a Watergate moment, not just for Labour but for British politics 1/…

Here they are betrayed by their own reactions. It was and still is Corbyn and the far-left who are pathologically obsessed with the hunt for wreckers and saboteurs.

Great show on @novaramedia earlier tonight as we discussed the #LabourReport

This is a huge story and, whatever some senior figures in the Labour party and labour movement would like, it isn’t going away.

Securing their own internal revolution was always more important than fighting external threats, be it the Conservative Party or the menace anti-Semitism represented. Between the incompetence, narrow-mindedness, and downright malice, the leaked report is a reminder of how lucky we were to be spared a Jeremy Corbyn premiership and now are to finally be rid of him.

Michael Foot was selected to lead the Labour Party after its defeat at the hands of Margaret Thatcher in 1979 because, coming from the left of the party, his friends believed he could reconcile the party’s broken wings. Faced with a far-left insurgency and a right splinter group that broke away to form the Social Democratic Party, he failed.

It is on the same basis of a wish for peace and reconciliation that Keir Starmer has now been chosen. One week in, the scale of the challenge he faces to recover the ground lost under Corbyn and repair the damage caused by the anti-Semitism crisis his leadership begat could not be starker.

Liam Hoare, a Vienna-based writer, is Europe Editor for Moment Magazine and a frequent contributor to the Forward.