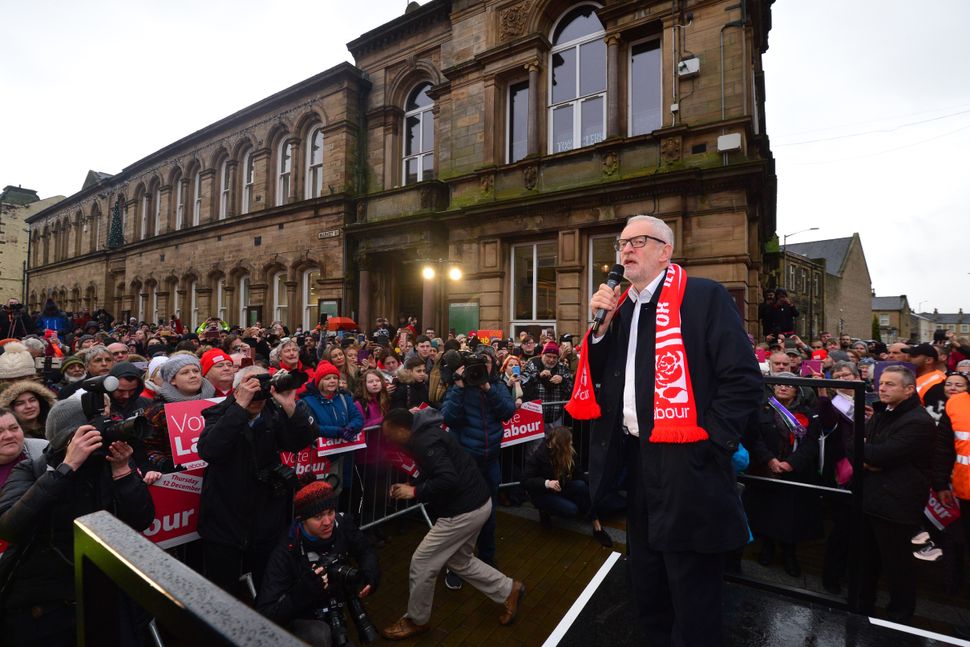 “The Labour Party is no longer a safe space for Jewish people.” So reads the damning opening line of the Jewish Labour Movement’s thoroughly-depressing submission to the Equality and Human Rights Commission’s investigation into Labour’s anti-Semitism crisis, made public just one week before British voters go to the polls on Thursday.

The Jewish Labour Movement has been affiliated with Labour since 1920. Yet it now regretfully concludes that the party “suffers from endemic, institutional anti-Semitism.” On Sunday, JLM’s chair Mike Katz announced the movement had declined to campaign for Labour in the run-up to Thursday’s general election, its members having realized “a while ago that Jeremy Corbyn is not fit to be prime minister.”

The JLM’s submission is the most comprehensive accounting of Labour’s anti-Semitism crisis to date, bringing together things already known and confirming more that was suspected: Anti-Semitic behavior within the party “rapidly escalated” following Corbyn’s takeover in September 2015. Jewish Labour members suffered abuse “simply because they were Jewish.” Corbyn “has repeatedly associated with, sympathized with, and engaged in anti-Semitism.” Labour’s leadership participated in the cover-up of anti-Semitism. And those who called out anti-Semitism were dealt with more harshly than those who committed it.

Under Corbyn’s leadership, anti-Semitism has become a “common experience” for Jewish members at local party meetings. “Tory Jew,” “child killer,” and “Zio scum” were just some of the insults thrown at one Jewish member, who was also told that “Hitler was right.” Others were told that Jews were responsible for prostitution, that they were “financed and controlled by the Israeli government,” that they were “subhuman.” One Labour member reportedly said that Jews “should be grateful we don’t make them eat bacon for breakfast every day.”

This doesn’t even account for the abuse Jewish Labour members received online, nor how Jewish members came to be excluded from party activities. In the constituency of South Tottenham in north London, the membership secretary of the local party turned down “25 applications for membership from the ultra-Orthodox Jewish community and required home visits to these prospective members’ houses,” something that, suffice it to say, was not required of any other applicants.

And then there’s the cover-up for which Corbyn’s leadership team is reportedly responsible. His office “attempted to maintain secrecy surrounding the scale of the number of anti-Semitism complaints,” instructing party staff to withhold information and updates on anti-Semitism cases and threaten those who sought to take their complaints public.

At one point in August 2018, staff were reportedly instructed via WhatsApp to upload anti-Semitism complaints onto USB sticks and bring them to Corbyn’s office, thus circumventing proper processes. The evidence submitted by the JLM was buttressed by an investigation published in the Sunday Times of London December 8, which revealed the names of and offenses committed by Labour members — and the failure to punish them.

Mariatu Conteh, who told a fellow Labour member that he was “licking the bum of Jews for money,” was only issued a “formal warning” for her troubles. The same thing happened to Allan Williams, who wrote on Facebook in July 2018, “Just check the names of the banks involved in the crash in 2008. They really are not helping themselves.”

And it took Labour 10 months to expel David Cooper after he called for the extermination of “every Jew on the planet” on social media, adding, “The Jew is worse than Black Death, worse than ebola virus. The Jew represents pure evil.”

Labour told the Sunday Times that all those members named in the investigation have “now been suspended or expelled.”

Too little, too late.

Jewish voters will, it seems, reject Jeremy Corbyn’s Labour at the ballot box. As Jonathan Boyd, executive director of the Institute for Jewish Policy Research, told the Guardian, Labour “has failed to understand or recognize how anti-Semitism manifests itself in leftist politics and as a result allowed it to fester and grow.”

In the country at-large, however, Labour has made steady gains in the polls in recent weeks, with its projected share of the vote now holding steady at around 32%.

Corbyn’s leadership and the anti-Semitism crisis have damaged the party but it remains the strongest opposition force in Britain. Though a poll taken in September 2018 showed that over 85% of British Jews believe Corbyn is an anti-Semite, only 39% of the wider British public is of the same opinion.

Perhaps there has been a failure of imagination on the part of those who have reported on Labour’s anti-Semitism crisis, with too great a focus on the ultimately-unanswerable question of whether Corbyn is himself an anti-Semite and not enough on why someone who “cares so little about anti-Jewish racism,” to quote the editor of London’s Jewish Chronicle, Stephen Pollard, is responsible for the anti-Semitic culture now present in Labour’s heart. It is also possible to argue that, with the details of Labour’s anti-Semitism crisis delivered piecemeal in the dailies, the strands of the various stories and incidents have been left unconnected.

No longer. Arguments have been made in favor of tactical voting, of backing the lesser evil, on the basis that “a Tory government” is the price to be paid “for abandoning Labour.”

British voters will find on Thursday that there is no lesser evil on the ballot, but rather, as James Bloodworth recently wrote, “several very different evils.”

The Conservatives are unelectable — but so are Labour. With the publication of both the JLM’s submission and the Sunday Times’ investigation, no one can argue that this was unknown. The truth is unavoidable: To vote Labour is to vote for an institutionally anti-Semitic party.