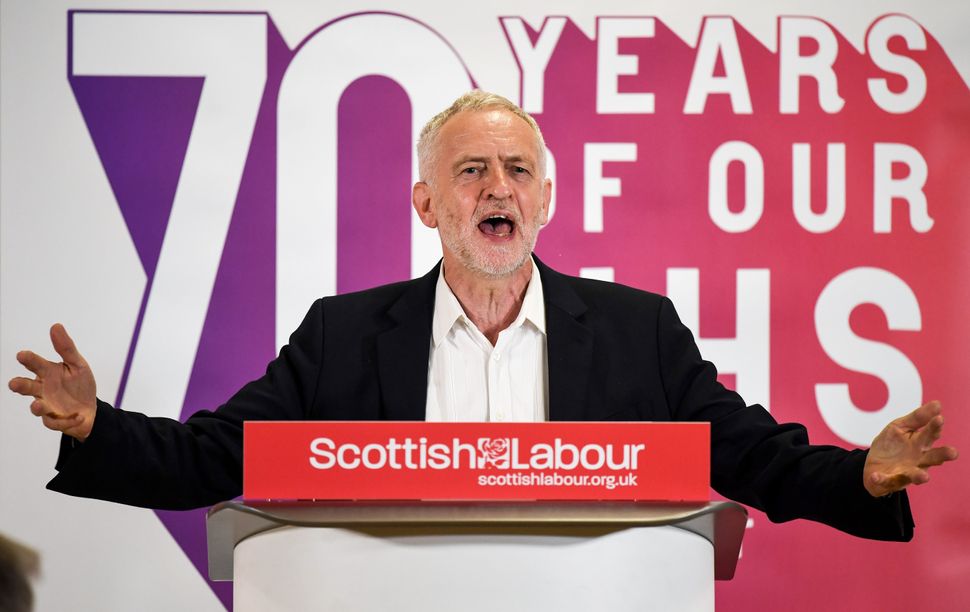 Margaret Hodge did us all a favor when she cornered Jeremy Corbyn in the Houses of Parliament and called him “anti-Semitic and a racist.” Whether one agrees with her choice of words or not, the well-respected Labour MP gave voice to something many believed to be true about Corbyn but few dared say. An outburst of pent-up frustration, Hodge’s intervention also injected fresh energy into the coverage of Labour’s anti-Semitism scandal, preceding a spate of new revelations about Corbyn’s engagement in anti-Semitic politics.

The extent of Corbyn’s support for the murderers of Israelis, for example, becomes ever clearer. Appearing on Press TV in 2012, he referred to Hamas terrorists responsible for a 2003 terror attack in Jerusalem that killed seven people as “brothers.” “I’m glad that those who were released, were released,” he added. Corbyn was also photographed in 2014 in Tunisia at a wreath-laying ceremony reportedly to honor members of Black September, responsible for the Munich massacre of Israeli athletes at the 1972 Olympic Games.

Again on Press TV — he cannot seem to help himself when it comes to the Iranian state propaganda network — he said in 2011, condemning the BBC’s coverage of the Israeli-Palestinian conflict, “I think there is a bias towards saying that Israel is a democracy in the Middle East, Israel has a right to exist, Israel has its security concerns.”

Another story involved a video, allegedly recorded in 2013, which caught Corbyn arguing that Palestinians in the West Bank live “under occupation of the very sort that would be recognized by many people in Europe who suffered occupation during the Second World War.”

Corbyn’s closest advisor, the former Guardian columnist Seumas Milne, reportedly said Labour’s watered-down definition of anti-Semitism was “the hill he will die on.” In light of recent admissions, his stubbornness is understandable. “Denying the Jewish people their right to self-determination” and “drawing comparisons of contemporary Israeli policy to that of the Nazis” are examples of anti-Semitism according to the IHRA Working Definition of Anti-Semitism. The latter, at least, did not make it into Labour’s weakened version. More than shielding his friends and allies, the party’s anti-Semitism definition would also protect Corbyn himself.

Hodge may well feel these new stories vindicate her choice of words. The evidence, which has been building since Corbyn entered the Labour leadership race in the summer of 2015 and only continues to mount, certainly leans in one direction. An anti-anti-Semite — or someone who has campaigned against racism in all its forms including anti-Semitism all his life, as Corbyn likes to remind us at any available opportunity — certainly does not go around comparing Israel to Nazi Germany and laying wreaths in cemeteries where the buried have Jewish blood on their hands.

But proving Corbyn is definitively an anti-Semite cannot become the new yardstick by which his suitability to be Labour leader is measured. It is not that it isn’t an important moral question but the danger is it could serve both as a distraction from the struggle at-hand and a gift to his political supporters, whose devotion to their leader mirrors the bond between Trump and his rally attendees. They can utilize the ambiguity of at least some of his statements to muddy the waters and argue it is impossible to prove whether, in his heart of hearts, Jeremy Corbyn is an anti-Semite or not. Besides which, there are enough charges on Corbyn’s rap sheet to make it clear that this man is not fit to run a whelk stall, let alone the Labour Party.

Corbyn, after all, has spent three decades and more rolling around in the sewer of anti-Semitic politics. He has referred to anti-Semitic terrorists as ‘friends’ and ‘brothers,’ supported Paul Eisen long after it was known he was a Holocaust denier, and hosted events in Parliament at which the Israeli government was allegedly compared to the Nazis. Corbyn can argue, as he did Monday concerning his honoring of the members of Black September, that he was “present” but not “actually involved” in these things all he likes, but it cannot be coincidental that, like a moth to a flame, the Labour leader keeps showing up in places and at events where anti-Semitism and anti-Israeli politics are realized.

This brand of anti-Semitic politics, window-dressed as anti-Israelism, has been brought, along with its contemptible supporters, from the far-left fringes of British political life into the heart of the Labour Party. Corbyn has contaminated and corrupted the party and is responsible for breaking the ties that bind Labour and the British Jewish community, whose struggle against anti-Semitism should be a common cause. When one can say all that, the specific question of whether Corbyn is or is not an anti-Semite doesn’t even need to be answered. Through word and deed, he has crafted his own indictment.

On Vienna’s Ringstrasse there remains both a statue and a square dedicated to Karl Lueger, who in late-nineteenth-century Vienna whipped up an anti-Semitic atmosphere that inspired Theodor Herzl to write The Jewish State. The carefully-worded contextualizing plaque installed at the statue’s base is notable for what it does and does not say. Rather than call Lueger an anti-Semite outright, it reads, “Populist anti-Semitism became an increasingly important feature of his political rhetoric over the course of his career.” Lueger “reinforced the anti-Semitic and nationalist trends of his time.”

Whether Lueger was an anti-Semite or someone who used anti-Semitism for political ends is ultimately a distinction without a difference, given his administration coincided with the end of the golden age of Jewish life in the Austro-Hungarian Empire. Similarly, when Britain’s three leading Jewish newspapers feel the need to come out with a joint editorial “because of the existential threat to Jewish life in this country that would be posed by a Jeremy Corbyn-led government,” it should not matter whether Corbyn is actually an anti-Semite or someone who has befriended anti-Semites and found a home in anti-Semitic politics. Whatever the intent, the outcome of Jeremy Corbyn’s politics is clear enough, for which, he should resign.