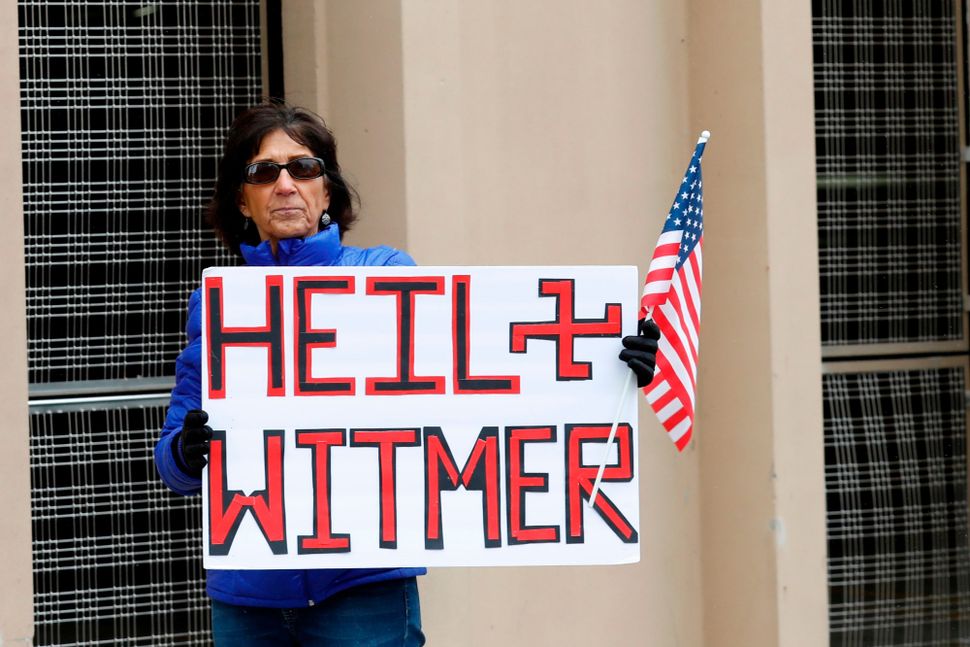 In response to stay at home orders imposed by local governments across the nation to protect American citizens from the deadly and contagious coronavirus, a wave of protests has broken out. These have been attended by an amalgam) of right wing interests, among them hard core white nationalists. We know because they brought their signs.

A placard displayed at Saturday’s Columbus, Ohio protest included a rat with a star of David, which the sign dubbed “the real plague.”

There is a long, scary and disgusting history of blaming Jews for plagues and disease. NOT ON MY WATCH. ✡️ https://t.co/2kDhpxsr0d

Meanwhile, in Ohio, Michigan, Minnesota and Colorado, one of the most consistent messages was that governors following the advice of health experts are the equivalent of Nazi leaders. Signs compared governors of those states directly to Adolf Hitler.

“Heil Whitmer” read a sign in Michigan, referencing Michigan governor Gretchen Whitmer, while in Minnesota, a picture contained a penciled-in Hitler mustache on an image of Governor Tim Walz, with “Fuhrer” written above it.

Thousends of citizens protest against the lockdown in Michigan that is hit by #coronavirus. Some are heavily armed and shout ‘Heil Witmer’ against governor Gretchen Whitmer.
All you see happening now in USA is more polarization. Freedom has a price. #Covid_19 #lockdown pic.twitter.com/VsenRwitdO

The comparison to the Holocaust is deeply offensive. As Colorado’s Jewish governor, Jared Polis, noted, “We act to save lives, the exact opposite of the slaughter of six million Jews, Gypsies, Catholics, gays and lesbians, Russians and so many others.”

Sadly, these kinds of comparisons aren’t rare. In the Minnesota House of Representatives, I have often heard colleagues make inappropriate Holocaust comparisons. It seems that any disagreeable policy can be compared to something from Nazi Germany. Political foes are personified as Adolf Hitler.

These kinds of offensive comments are intensified under circumstances like these. White nationalism thrives during times of economic distress and uncertainty. I encountered it during the farm crisis of the 1980’s in the midwest, where groups such as the Aryan Nations and Posse Commatatus blamed the economic depression in agriculture on an international Jewish banking conspiracy.

As a child of Holocaust survivors, I view the confluence of white nationalism with counter factual Holocaust analogies as particularly chilling in this time of economic upheaval and social instability. It is especially concerning that the anti-governor protests are not spontaneous acts but are organized and funded by various right wing groups. The protests featured “street-fighting rightwing groups like the Proud Boys, conservative armed militia groups, religious fundamentalists, anti-vaccination groups and other elements of the radical right,” per Jason Wilson writing in The Guardian. President Trump has also tweeted direct support for the protests.

This past summer, my wife and I led a Jewish heritage trip to Eastern Europe. I walked through the same neighborhoods in Warsaw where my Polish mother hid out on false papers and later fought the Nazis in the partisan Polish uprising.

We recited Kaddish near the remains of the crematoria in Auschwitz where my Hungarian grandmother and aunt perished. Our tour group arrived in Berlin on September 1st, the 80th anniversary of the beginning of World War II. After visiting the Reichstag that afternoon, our Israeli born guide said, “The lesson of the Reichstag for today is that democracy is a fragile thing.”

On this Yom Hashoah, we must heed the warnings of my Berlin guide. The current crisis is putting our basic values of decency and democracy to the test.

American Jews of all political persuasions need to speak loudly and with one voice against extremism and Holocaust trivialization. Nothing less than preserving our fragile democracy and properly honoring the Shoah is at stake.

State Representative Frank Hornstein is a member of the Minnesota Democratic Farmer Labor party and lives in Minneapolis.

Frank Hornstein is a member of the Minnesota House of Representatives and a fellow at the Sabo Center for Democracy and Citizenship at Augsburg University.