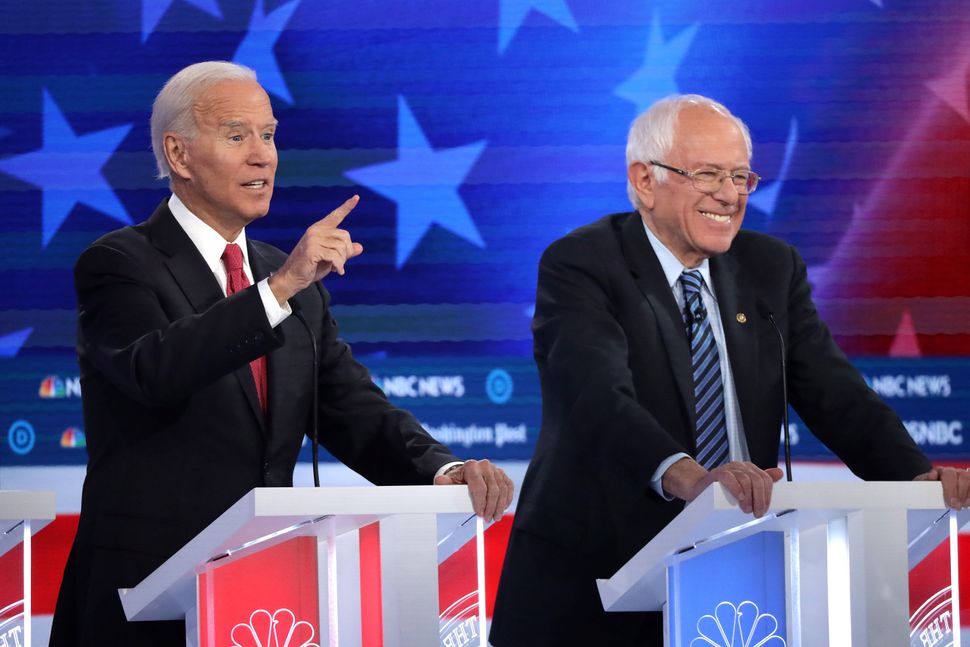 Senator Bernie Sanders’ departure from the presidential election two weeks ago set off a predictable deluge of heartfelt political obituaries and visions of what could have been. Most of these pronouncements on social media and in left-leaning press outfits have focused on the candidate’s domestic agenda — Medicare for All, student loan forgiveness, a Green New Deal etc. — items that seem all the more resonant as the country faces a calamity not seen since the Great Depression. Lying unsubtly beneath the surface of these takes was a comparison to Joe Biden — indeed, a rather unfavorable one for the presumptive Democratic nominee.

As with all fond retrospectives, though, there is a large degree of myth in the Sanders portrait — and in this case, the myth has exaggerated the difference between Sanders and Biden.

In truth, Sanders is less the bold revolutionary his most fervent supporters imagine than a reinvented former counterculture warrior turned exponent of mainline social democratic ideas. As the Irish political commentator Fintan O’Toole argued, Sanders has spent more political energy in recent years distancing himself from his activist past than reinforcing it, so much so that an oft-repeated theme in his speeches and debate talking points was the lack of radicalism in his ideas.

But it’s not just on domestic issues that Sanders’ views hew closer to the mainstream than to some radical pole. The hysterical exaggeration of his position on Israel and Palestine is a case in point in how the real Sanders has been obscured by both the wildest desires of a small group of core supporters, as well as opponents with an obvious incentive to tar Sanders as an extremist.

Sanders’ supporters have cast him as farther to the left on Israel than he actually is. Last month, IfNotNow, the anti-occupation movement founded by young American Jews, formally endorsed Sanders, heralding him as a candidate who “has embraced the common sense position that the Israeli military occupation of the Palestinian people should end — and that our tax dollars should stop funding it.” And after Sanders formally ended his campaign, the writer and television presenter Mehdi Hasan issued a typically hyperbolic, bizarre assessment: “The United States came so close to electing the first president who sees the Palestinians as human beings with equal rights.”

The United States came so close to electing the first president who sees the Palestinians as human beings with equal rights.

This is the Sanders hype at work. While certainly on the left of the Democratic mainstream on the Israeli-Palestinian conflict, Sanders never promised to cease military aid to Israel while Israel occupies Palestinian territory; his more limited pledge involved “leveraging” aid to restart negotiations, along with a vague statement about redirecting some funds to rebuild Gaza.

A clear moral denunciation of American complicity in the occupation it was not. That this was the furthest any Democrat was willing to go in pressuring Israel spoke more to the continued endurance of pro-Israel politics in the Democratic Party than anything else. Neither did Sanders’ stated position deviate so drastically from that of former President Barack Obama — whose own views were not far-left of his own Democratic predecessors.

It is fair to say President Obama — and indeed Presidents Carter, Bush, and Clinton — did not do nearly enough to help the Palestinians and end Israeli encroachment onto their territory. Inadequate support of the two-state solution, the very same principle by which Sanders would try to end the occupation, defined their tenures where Palestinians were concerned.

In fact, Biden himself espoused a remarkably similar view to Sanders at the American Israel Public Affairs Committee last March. “Israel, I think, has to stop the threats of annexation and settlement activity, like the recent announcement to build thousands of settlements,” Biden said in a video address. “That’s going to choke off any hope for peace. And to be frank, those moves are taking Israel further from its democratic values, undermining support for Israel in the United States especially among young people in both political parties.”

There just isn’t a lot of daylight between these comments and Sanders’. But if Sanders’ supporters on the left exaggerate his pro-Palestinian bonafides and Biden’s pro-Israel ones, their critics on the right are doing something similar, too.

Sanders’ harshest critics were of course no less zealous in their pursuit of crowning him a champion of Palestine. The Republican Jewish Coalition repeatedly tried to tie Sanders’ views on Israel to those of certain campaign surrogates, particularly Rep. Rashida Tlaib and Rep. Ilhan Omar, who support the movement to boycott Israel (Sanders does not) and who have both been accused of anti-Semitism.

And just as they misrepresented Sanders, Republicans and Jewish Republicans in particular are trying to burden Biden with Sanders’ supposedly harsh views of Israel.

So the people who advised @BernieSanders – the guy who said we should look on the bright side of Fidel Castro, supports lifting sanctions from Iran & counts anti-Israel, anti-Semites like Omar/Tlaib among his friends – are invited to join @JoeBiden’s foreign policy team? Absurd. https://t.co/xYP2sMEyyz

For a multitude of reasons, it is hard to imagine a future Democratic president succeeding in resolving the Israeli-Palestinian conflict, regardless of their assumptions and prejudices walking in. And when they don’t, expect to hear a lot about how Bernie’s approach would’ve been completely different. It won’t be a logical deduction from his stated positions, but another desire projected onto him by supporters who feel their ideas have been unfairly ignored and maligned.

Ironically, those doing the maligning will insist the “Sandernistas” are already getting what they want — in Biden.