Sanders lost the democratic primary. But he won the moral argument. 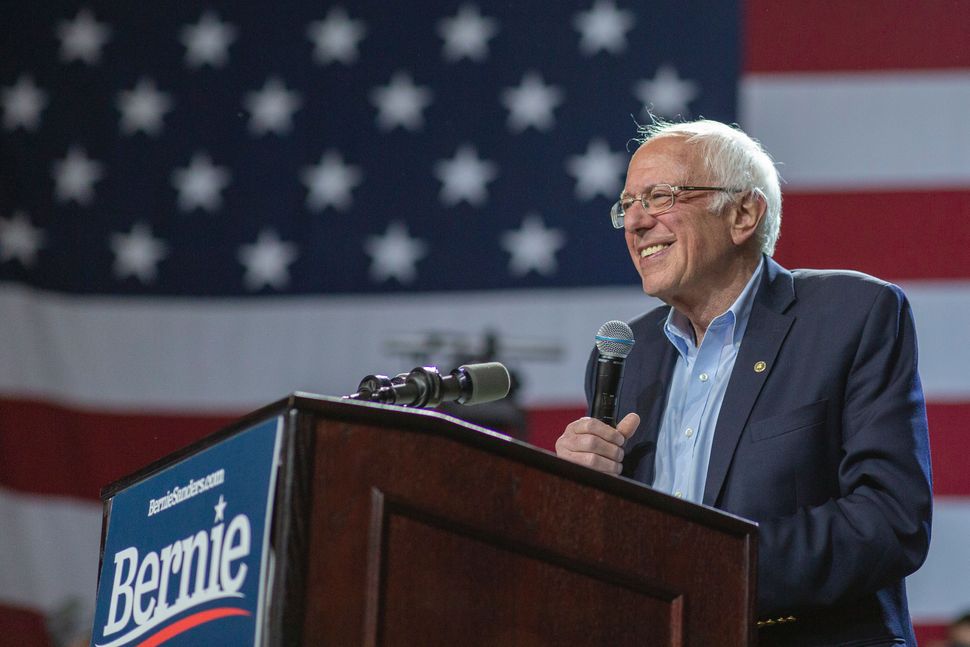 There’s something deeply symbolic about the fact that the most successful Jewish presidential candidate in U.S. history dropped out of the race on the eve of Passover, our people’s holiday of liberation. And that he’s dropping out at a time when recent news has proven him more correct about our politics than ever before. On one level, Senator Sanders probably had no choice but to drop out of the race. Though the first three contests of the presidential campaign established the independent Vermont senator as an early frontrunner for the Democratic nomination, ever since his landslide loss to former Vice President Joe Biden in South Carolina, Sanders has fallen further and further behind in the delegate count, with little or no chance of catching up to Biden.

Moreover, the public health requirement that we all self-isolate to stop the spread of the coronavirus may make holding further primary elections irresponsible. Just yesterday, the presidential primary in the state of Wisconsin disintegrated into a total debacle of only questionable democratic legitimacy, after the state’s Democratic governor tried to postpone the election and further expand access to absentee voting by mail, only to be blocked by the Republican-majority state Supreme Court in a decision that Sanders said was “dangerous, disregards the guidance of public health experts, and may very well prove deadly.”

Sanders, who demanded that Wisconsin postpone its primary election to avoid the horrible images of masked voters standing in line to vote, holding signs about how awful the whole situation was, may well have decided that dropping out of the presidential race was the only responsible decision he could make for public health at this point. That way, Democratic voters in states that have not yet voted will not have to make the agonizing choice between prioritizing public health by remaining home or going to the polls to exercise their democratic franchise. There may simply be no way to responsibly run a presidential campaign during the worst pandemic in a century.

Yet what is perhaps most ironic is that Sanders is dropping out a time when history is proving just how necessary his radical socialist policies truly are.

At a time when 35 million Americans are in danger of losing their healthcare coverage due to coronavirus-related job losses, even when a major pandemic makes access to healthcare more crucial than ever before, the Sanders campaign’s relentless focus on the absurdity of a system where healthcare coverage is linked to employment — a system unique among other comparably developed nations — just seems like common sense.

When Sanders says, “we must guarantee to the American people” never again “losing your health insurance if you lose your job,” the coronavirus crisis makes this statement seem like a simple moral necessity.

Medicare for All means never losing your health insurance if you lose your job. That is what we must guarantee to the American people.

Indeed, it seems so self-evident that even President Trump now says hospitals must be paid for treating uninsured coronavirus patients. There’s a reason why the coronavirus crisis has resulted in a decisive increase of support for Medicare for All among Americans.

When Bernie Sanders says that every American worker needs to have paid sick leave, as is already the case in nearly every other developed nation on earth, the coronavirus just shows what common sense this proposal is.

Every worker in America should have guaranteed paid sick leave. This is already the case in every other major country on Earth.

Because we lack paid sick leave, a whopping 90% of American employees say they come to work sick, for fear of losing their jobs if they do not.

Do we really want essential employees who have contracted the coronavirus to work sick at a time like this? At a time when the Trump administration has just blocked paid sick leave for 75% of American workers, Sanders’s proposal seems more self-evidently necessary than ever. Indeed, guaranteed paid sick leave has become so popular during the coronavirus crisis that 56% of Republican voters now support it.

At a time when millennials are in a more precarious financial situation going into the coronavirus recession than any previous generation, possessing on average only half the financial assets that Generation X had going into the Great Recession of 2008, and overloaded with student debt that our generation cannot possibly pay off when we are disproportionately likely to lose our jobs due to the crisis, Senator Sanders’s proposal to cancel all student loan debt seems to many millennials like the only way we can imagine coming through this crisis with any sort of livable financial future ahead of us.

There’s a reason why, even as he lost the Democratic electorate as a whole, Sanders decisively won Democratic voters under the age of 45.

Indeed, Senator Sanders’s detailed plan to address the coronavirus crisis and its associated economic pain, which calls for two trillion dollars in emergency funding for free healthcare and direct cash payments of $2,000 per month to every American, increasingly seems like the only plan that truly grasps the scale of the devastation we’re facing.

Sanders likes to point to Scandinavian nations like Denmark as models for his democratic socialist politics, often to rebut critics who accuse him of advocating for the US to emulate authoritarian socialist states such as Cuba. It is not coincidental that Denmark has agreed to pay 75% of the salaries of workers who would otherwise lose their jobs due to the coronavirus for as long as the crisis lasts, a response that economists say makes Denmark the most likely nation in the world to weather this crisis with its economy intact. Right now, doesn’t becoming a bit more like Denmark seem like the only sensible thing to do?

That’s the great irony of the Sanders campaign. Even as he lost the Democratic nomination to Joe Biden, the coronavirus crisis shows that he won the moral argument for what our economy ought to look like when this is all over.

So, even if he did not make it into the Promised Land himself, Sanders can take some comfort in knowing that he led his adopted political party toward a more moral response to the gravest crisis we’ve faced in a generation — a bit like another Jewish leader associated with this time of year.

On the eve of Passover, the greatest plague in a century has forced the most successful Jewish presidential candidate in US history to drop his presidential bid for public health reasons, even as it has proven him correct in his moral diagnosis of our economic system.

Next year, out of quarantine, in a more moral economy.

Sanders lost the democratic primary. But he won the moral argument.